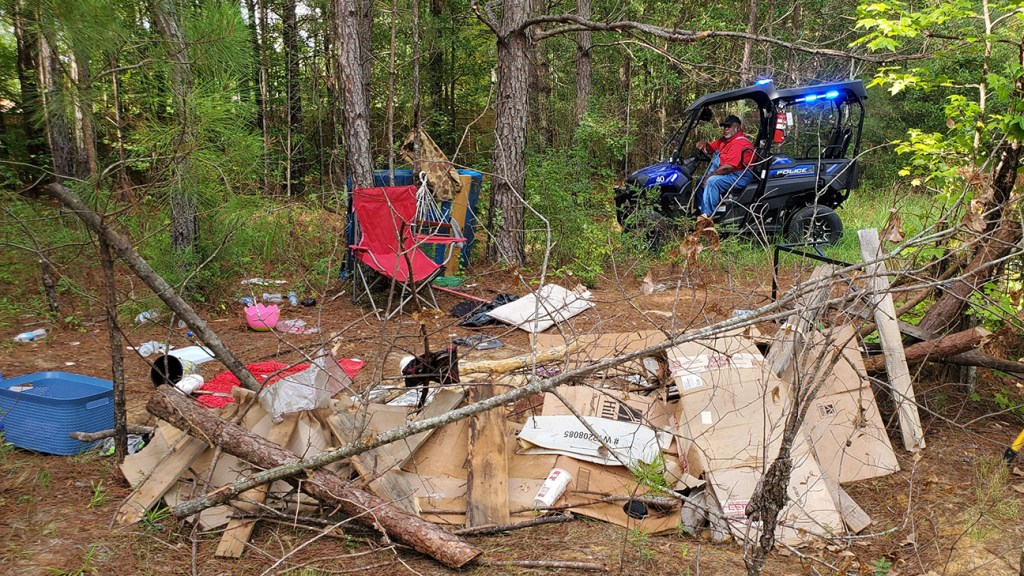 The homeless population in Mississippi is among the lowest in the nation, but it is not non-existent.

According to 2020 data from the United States Interagency Council on Homelessness, just more than 1,100 people are experiencing homelessness on any given day in the state. Of the total 1,107, 76 were family households, 68 were military veterans, 51 were age 18-24 unaccompanied adults, and 146 were individuals experiencing chronic homelessness.

In Brookhaven, homeless people or vagrants have caused concern for citizens and officials. Efforts to clear out encampments in wooded and other concealed areas ramped up after a woman was carjacked in Walmart’s parking lot in June. At the time, police officers said they believed the suspect was someone who had been regularly hanging out around the store, possibly in the wooded area nearby.

Brookhaven Police Chief Kenneth Collins and other officers have made repeated entry into the woods on police-owned ATVs to move out settlers, make necessary arrests and clear out trash. Collins said a repeated police presence would discourage criminal activity in general, and reassure business owners, employees and shoppers that law enforcement was there for their safety.

“I think it’s a good thing that the chief is actively engaged in trying to address the problems associated with the number of homeless folks we’ve got,” Alderman-at-large Don Underwood said.

“The chief is doing the best he can with the situation that has been handed to him,” said Alderman Fletcher Grice — who represents Ward 5, where Walmart and many of the encampments have been located. “Personally, I’m really grieved that we have homelessness in our day and time.”

Collins said some people have complained that he has driven the ATVs on the city streets from the police station to encampments and back.

“These are not like their ATVs. These are police vehicles, equipped with lights and sirens. Anything we’ve got at that police station — those police vehicles — we’re going to use,” Collins said. “That’s why we’re out here, trying to keep the people safe. When criminals adapt, we have to adapt.”