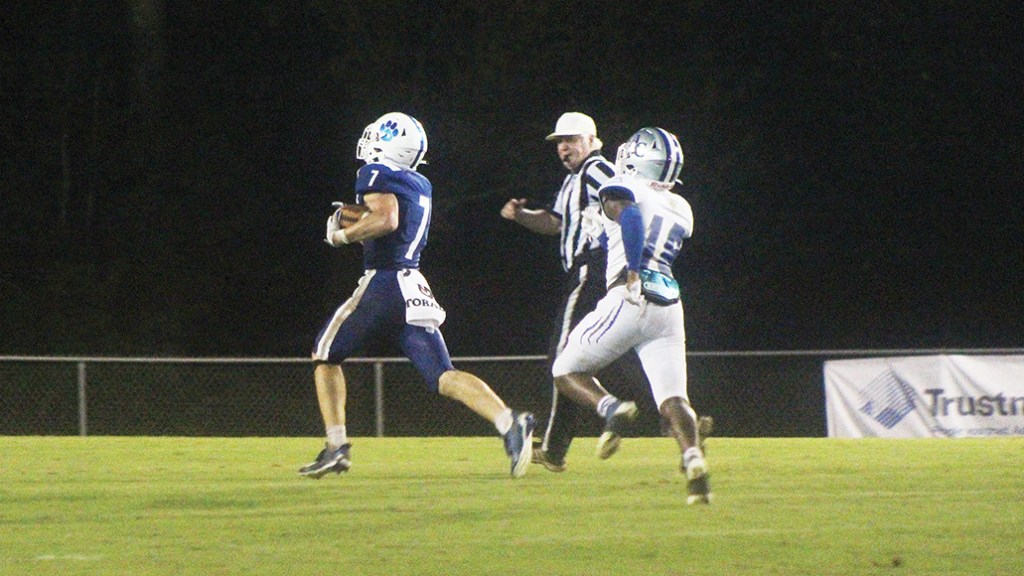 The Adams County Christian School Rebels (1-0) are a team with speed to burn in all areas of the game, especially special teams.

Friday against Brookhaven Academy in the MAIS season opener for both teams, the Rebels used a long kickoff return in the second half to set up a game sealing score in what would be a 27-14 win over the Cougars (0-1).

Trailing 21-7 late in the third quarter, it was a big special teams play that pulled BA within a single score.

Senior Trevor Fortenberry picked up a rolling punt at his team’s 8-yard line and proceeded to race down the visiting sideline for a 92-yard punt return touchdown. That made it 21-14 with 1:32 remaining in the third quarter.

Any semblance of momentum was quickly sucked up by the visitors from Natchez with their pivotal kickoff return following Fortenberry’s score.

ACCS junior Jordan Berry returned the kickoff for 50-yards down to the Brookhaven 25-yard line.

“We had some big mistakes in that part of the game (special teams) tonight,” said BA coach Anthony Hart. “We had some mix ups there and we had some containment issues with our defense. Things that we work on every day, but we’re going to get better at those things and fix those mistakes.”

ACCS then iced the game with a 6-play drive that culminated with sophomore quarterback Coleman Carter scoring on a 3-yard run when BA had made it 4th-and-1 for the Rebels.

Explosive plays were the order of the night for ACCS offense.

Coach David King’s team got on the board with 10:16 remaining in the first half when senior running back Terrell Tenner broke off a 55-yard touchdown run to knot the score at 7-7.

The stocky Tenner had defenders bouncing off his upper body like Bo Jackson in Tecmo Super Bowl during the tackle-breaking run.

It only took 98 seconds for ACCS to score again, this time when Berry took a pass in the flats and raced in for a 30-yard score.

That gave the Rebels a lead they’d never surrender by a 13-7 advantage, which remained the score at halftime.

That go-ahead score had been set up by the ACCS defense forcing the Cougars to punt from their own endzone on the previous possession.

The best quarter of the night for the BA offense was the opening 12 minutes.

The teams traded 3-and-out series to start the game, before the Cougar defense forced a fumble that put the team in prime scoring position.

Senior defensive tackle Conner Johnson picked up a ball that landed in the grass just before going out of bounds and gave his Cougars possession on the ACCS 30-yard line.

Quarterback Elijah Helton dropped back and hit Fortenberry on a pass down to the 5-yard line to set up 1st-and-goal after the 25-yard gain.

On 3rd-and-goal, Helton kept it on a quarterback run and leapt over a defender for a 2-yard touchdown run.

Junior Cooper Strickland blasted through the point-after kick and BA led 7-0 with 6:25 remaining in the first quarter.

The Cougar defense forced back-to-back turnovers on drives for ACCS in the second quarter to keep it a 1-score game.

Defensive back Thomas King came around the backside to force a fumble that was recovered by Johnson and on the next drive senior Jacob Sanford went low to pick off a pass from Carter that had sailed over the intended receiver.

BA had won the kickoff and deferred to the second half and the hope for home fans was they’d come out with a drive to go back ahead.

The playing surface at R.M. “Red” Stuart Field held up nicely considering the amount of rain that came through the area earlier this week and with elementary cheerleaders on the field to perform at halftime, the home side of the stadium was packed with fans.

ACCS yielded nothing on that opening drive of the third quarter though and went ahead by two scores on its first possession of the period.

Carter bounced off multiple tackles in the middle of the BA defense and pulled away to score on a 30-yard run that put ACCS up 21-7 with 8:17 left in the third quarter.

With eight minutes remaining in the game and ACCS up 27-14, BA put together a drive that went deep into Rebel territory.

Two 15-yard unsportsmanlike penalties hurt Adams County on the drive and the Cougars had first down on the Rebel 11-yard line.

The ACCS defense pinned its ears back though and made the home team move in the wrong direction on consecutive plays. The final scoring threat of the night was snuffed out by an interception from Samuel Merritt of ACCS and King’s team was content to run out the remaining clock to preserve the win.

Brookhaven Academy will play on the road next week at Central Holmes Academy in Lexington. The message from Hart to his team was a positive one on the field Friday night.

The 2022 Cougars have a mix of veterans and young players that are stepping into the shoes of departed multi-year starters.

“We had some guys starting tonight that had never played in a high school football game,” said Hart.

The first game for Hart as head coach at BA was the trip to Natchez last season to play ACCS on the road.

The Rebels won that game 46-21 in a contest that was never close.

“Last year in the fourth quarter, we were just looking to get on the bus,” said Hart. “Tonight, we had a chance to score to cut it to a one possession game in the fourth quarter, but we made some mistakes that cost us that chance. We’ve got to clean those things up as a staff and a team, but we’re still excited about this team and this season. We’ve got a lot of football left to play this year.”