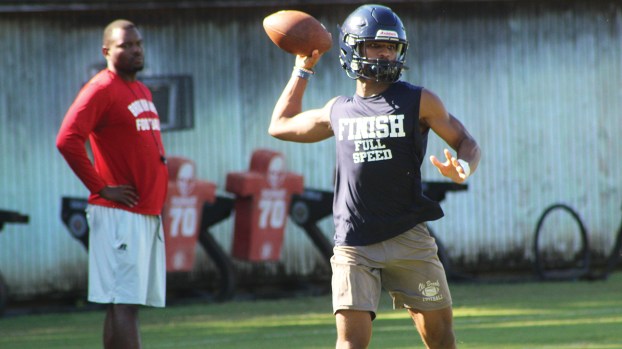 PHOTO BY CLIFF FURR Brookhaven High junior Xavier Gayten takes over at quarterback for the Panthers in 2022. Gayten was an All-Area selection last season as a running back. 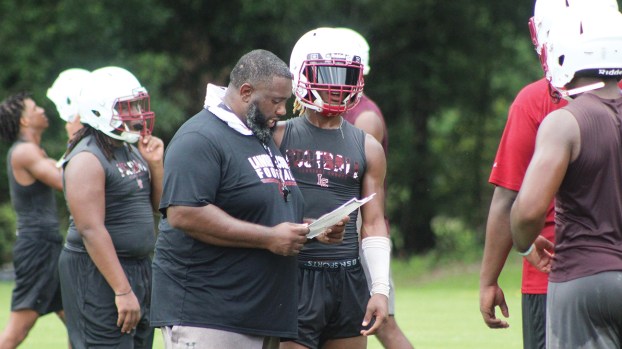 PHOTO BY CLIFF FURR Lawrence County head coach Jesse Anderson goes over a play-call during a recent practice with junior quarterback Kannon Cato. LC will be the home team when they play Brookhaven High at Co-Lin on Thursday in the KDMC Kickoff Classic.

The King’s Daughters Medical Center Kickoff Classic is back again in 2022 with a pair of high school football matchups to jump start the opening week of the MHSAA season.

Both games will be played at H.L. “Hook” Stone Stadium in Wesson with 7:30 p.m. kickoffs.

First up on Thursday is a matchup between the Lawrence County Cougars and the Brookhaven High Panthers.

The contest will serve as a home game for Lawrence County as Cougar fans will sit on the press box side of Stone Stadium.

On Friday, the pairing will be a rematch from last season as Wesson will tangle with Tylertown.

It’s the first time for Brookhaven High to play in the KDMC Kickoff Classic since the inaugural season of the event in 2016. That year the Panthers beat Franklin County 21-13 in a tight game while Lawrence County fell 44-27 to Magee the other matchup of the weekend.

“We make it an experience for the schools,” said Culpepper. “We provide a pregame meal for the teams who want to get to campus a little early and eat in Co-Lin’s facilities. We’ve got a hospitality room and suite for the various school boards and administrators, and we give the winning team in each game a trophy.”

The event wasn’t held in 2020 due to the pandemic.

The 2019 versions had three games and was the last time Lawrence County played in the Kickoff Classic, holding off Hazlehurst that night for a 19-18 win. Crystal Springs topped Wesson 19-12 and BA beat Sylva-Bay Academy 43-31 in 2019 as well.

BHS and Lawrence County were supposed to open the 2021 season against each other, but COVID-19 issues forced the Panthers to pull out.

The last meeting between the schools on the field was a 52-28 win by LC in Monticello in 2019.

That victory broke a three-game win streak for BHS over Lawrence County.

Brookhaven High holds a 24-8 advantage all-time in the series that began in 1989.

Both schools will be putting new starting quarterbacks under center in 2022.

For Brookhaven High and head coach Tucker Peavey, the 2022 Panthers will be led by junior Xavier Gayten, who slides over from running back to take the job.

It’s a similar switch at Lawrence County, as coach Jesse Anderson and his staff will trot out junior Kannon Cato at QB1.

Cato is a standout athlete who’s played running back and cornerback during a career in which he become a starter while still a freshman.

Despite losing some starters to graduation, the offensive line of Brookhaven High will be one of the Panther’s biggest strengths.

Lawrence County runs a double-wing offense that also keeps the ball on the ground on most drives.

All that to say, don’t show up late on Thursday as the matchup will be one with lots of ground-based offense and the clock will rarely stop.

The matchup last season between Tylertown and Wesson was anything but quick, but it was an exciting game filled with huge plays on a Saturday night.

Wesson led 30-6 in the second half, before Tylertown receiver Jeremiah Dillon helped carry his team back. Dillon returned a punt for a 55-yard score that tied the game up at 30-30 with just under three minutes remaining in the game.

Then, with 21 seconds remaining, he caught a 9-yard touchdown pass that put Tylertown up 38-30 in an eventual 46-30 win for the Chiefs.

Other area games on Friday will feature West Lincoln hosting Franklin County, Brookhaven Academy traveling to face Central Holmes Christian, Bogue Chitto will play at Pisgah and Loyd Star is on the road at Mize.