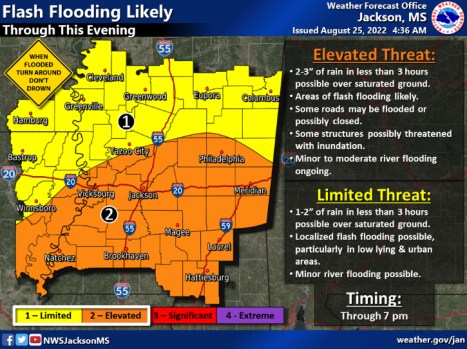 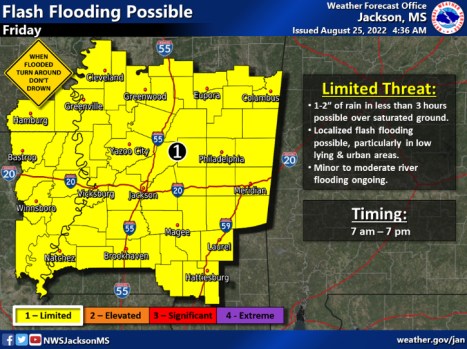 The National Weather Service has issued an elevated threat of flash flooding through 7 p.m. Thursday, with 1-2 inches of rain in less than three hours possible over already saturated ground. Localized flash flooding is possible, particularly in low-lying and urban areas, and minor river flooding is also possible.

The threat drops to “limited” Friday, from 7 a.m. until 7 p.m., as heavy downpours could bring another 1-2 inches of rain.

Heavy rains and flash floods drenched Mississippi Wednesday, prompting rescue operations, closures and evacuations including dozens of residents at a nursing home in the central part of the state.

Rain has pummeled the central and southern parts of the state for the last three days. In statements posted to Twitter, the National Weather Service said flash flood warnings were in effect for several areas from Jackson, the state capital, to Meridian and southward to Laurel and Prentiss, with numerous reports of flooding Wednesday.

Courtney Ingle, whose grandmother lives at the nursing home, told The Associated Press she called the facility after her husband saw fire trucks racing in its direction. The call would not connect. When she called her grandmother’s cellphone, a nurse answered and said residents were being evacuated.

Ingle received confirmation about 30 minutes after she first called her grandmother that residents had reached the safe room. She said firefighters and nurses were both involved in the evacuation.

“This is some straight-up local superhero-type stuff,” Ingle said. “What it boils down to is all the stuff they lost is replaceable. The 42 people they rescued are not.”

First responders in the central Mississippi county also said they were working to rescue people from their homes amid Wednesday’s downpour. Tammy Boykin, a Brandon resident, told the news station she had never seen flooding so severe in the eight years she has lived in the area. Bailey said the county had deployed one airboat, two regular rescue boats, and three high water rescue vehicles.

Leaders with the Canton Public School District in neighboring Madison County announced schools would close early Wednesday due to the flooding and impassable roads.

There have also been several car crashes reported, many due to hydroplaning, according to WAPT-TV. A Jackson man told the news station he became stranded after his car stalled on a flooded street. He said he did not realize the road he was driving on was flooded until it was too late. He sat atop his car and waited until first responders arrived.

The Neshoba County Fairgrounds, home to an annual festival and cabins dating back to 1889, was flooded Wednesday morning.