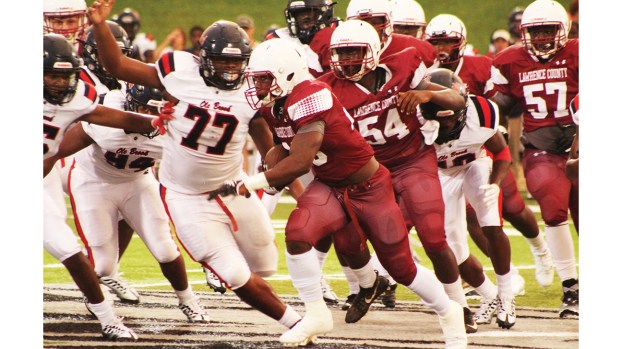 PHOTO BY CLIFF FURR Lawrence County junior running back Ahmad Hardy cuts back against the grain to outrun the BHS defense Thursday in the first half of the KDMC Classic at Co-Lin. 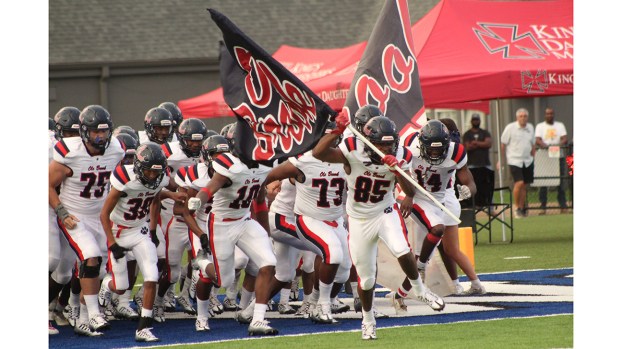 PHOTO BY CLIFF FURR Brookhaven High gets ready to run onto the field Thursday before facing Lawrence County at Co-Lin. 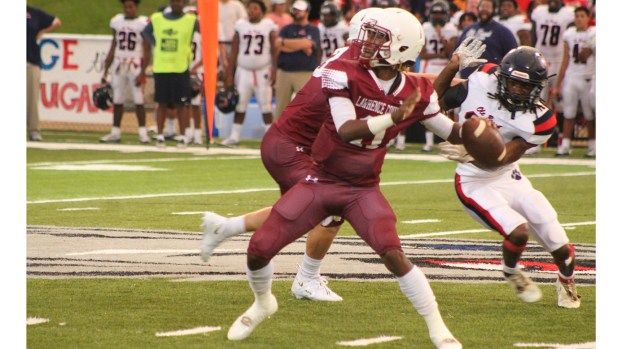 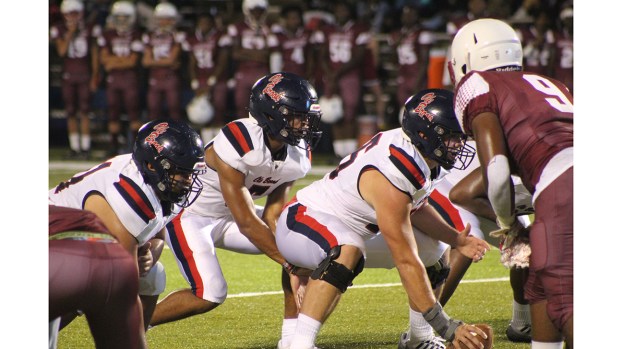 PHOTO BY CLIFF FURR BHS junior quarterback Xavier Gayten readies to receive the snap Thursday in the second half against Lawrence County.

They’d traveled up Highway 51 to see their teams play in the KDMC Kickoff Classic that was the season opener for both schools.

The game was a home contest for Lawrence County and the visiting bleachers were overflowing with fans wearing red to support Brookhaven High.

Whether you came from Monticello or somewhere closer, those in attendance were treated to an outstanding high school football game that ended with a 21-16 Lawrence County victory.

The night saw some wild momentum swings that resulted from big gains.

Lawrence County and coach Jesse Anderson received the opening kickoff and faced a 3rd-and-7 from midfield on the first drive of the game.

In the past, a distance such as that might be kryptonite to the double wing offense run by LC, but Anderson and his team unveiled some new wrinkles against BHS.

Thursday was the first game under center for Lawrence County junior quarterback Kannon Cato. The speedy Cato is also a standout baseball player and on that early third down he showed off his arm in moving the chains with a throw to senior split end Anthony Owens.

Cato then used his legs to convert a 4th-and-1 later in the opening drive.

The possession culminated with Cato hitting junior Zion Thomas on a 40-yard scoring pass that saw Thomas run past the BHS secondary and catch the ball without breaking stride.

The conversion attempt was no good and LC led 6-0 with 7:33 left in the opening quarter.

Brookhaven High also has a first year starting quarterback in junior Xavier Gayten. The pairing of Gayten and junior running back Nathan Lewis ate up yards on the first drive for BHS, but the possession stalled in the redzone.

BHS settled for a 30-yad field goal by junior Bryce Smith that made the score 6-3 with 3:07 left in the first quarter.

Smith and the BHS kickoff unit then pinned LC on their own 15-yard line on the ensuing kickoff.

A 65-yard sprint by Gayten past the Cougar defense put BHS up 9-6 early in the second quarter and brought life to the Panther sideline.

Again, Smith and the BHS kickoff team pinned Lawrence County deep and it paid off as the Panthers inherited a short field offensively and padded their lead when Lewis scored on a 40-yard touchdown run with 5:37 remaining before halftime.

It took 30 seconds for Lawrence County to respond.

The Cougars returned the kickoff to their own 42-yard line and then picked up a chunk of yards on another Cato to Owens passing connection.

The gain was further aided by a 15-yard personal foul penalty for a hit out of bounds.

On the next play, junior running back Ahmad Hardy bullied his way in from 19-yards out to reach the endzone. Cato hit Owens on the conversion pass and the BHS lead was cut to 16-14 with 5:06 left until half.

The second half wasn’t as action packed as LC called plenty of runs for Hardy between the tackles and Brookhaven fought to find some offense in the passing game.

The final score of the night came with 4:39 to go in the third quarter when Cato ran in for an 8-yard rushing touchdown. Osvaldo Del angel split the uprights on the point after kick to make the score 21-16.

The second half took an even more sour turn for Brookhaven High when their kicker/punter Smith — who also plays tight end — went down with a lower leg injury after taking contact on a punt.

There was no flag on the play.

Earlier in the game, Smith had unleashed a punt that traveled 72-yards to pin LC inside their own 10-yard line.

As down as the BHS sideline was after that injury, hope for a late score remained high after senior defensive end Bryson Porter recovered a fumble with seven minutes remaining on his team’s 19-yard line to give Ole Brook the ball back

The Panthers put together a meat-grinder of a drive that had Gayten and other ball carriers running behind the large Ole Brook offensive line.

With two minutes remaining in the game, BHS had a first down on the LC 12-yard line.

They’d get no closer though as the Cougar defense, led by Hardy at linebacker, pushed the Panthers backwards and forced a turnover on downs to ice the game with 60 seconds remaining.

Next up for BHS is a home matchup at King Field with the 6A Petal Panthers on Friday.

“We had several stops on defense where we didn’t bring them down and let them extend drives,” said BHS coach Tucker Peavey. “If we didn’t get the big play on offense, we didn’t sustain drives.”

Conditioning played a factor for both teams as wet weather has severely limited practice of late and BHS battled cramps, especially on the defensive side of the ball.

“Lawrence County has a good football team and those two good guys that carried the ball tonight (Hardy and Cato) are really good at it,” said Peavey. “We’ve just got to get better.”

Anderson, in his fifth year as head coach of his alma mater, gathered with the team to receive a trophy after the game from officials with KDMC and Co-Lin.

LC will play at Monticello next week when they host 1A Lumberton.

“Man, what a way to start the high school football season on a Thursday night,” said Anderson as he stood with his play sheet in hand, a towel around his neck and a spreading grin across his face. “The ebb and flow of this game with two good teams, two rivals, going back and forth in a great game — you’ve got to love it.”