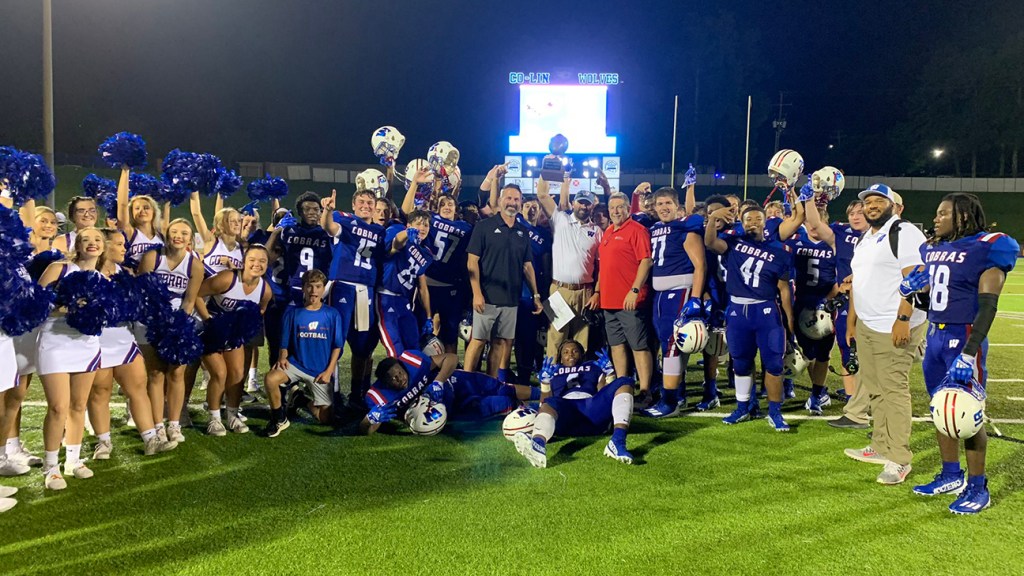 PHOTO BY CO-LIN SPORTS INFO You’ll never see more of a “team” win than the one Wesson had over Tylertown on Friday night. The Cobras pose with their KDMC Kickoff Classic trophy after a 49-48 win.

Traditionally, this space is reserved for what’s known in the biz as a football gamer. You know, a game story filled with some quotes, analysis and stats that tell the tale of who won and who lost on a Friday night of high school football.

When the Wesson and Tylertown game finished at 10:45 p.m. on Friday night, I knew that no gamer I could write in the next 30 minutes after getting home would do justice to the game.

And brother, what a classic it was.

To write up all the drama, big plays and heroics involved in getting to that final score would take more time and words than I have right now.

It ended with a walk-off 2-point conversion by the Cobras.

Wesson made it a 1-point game as the final horn sounded to end the game.

Senior quarterback Will Loy snuck in from the 1-yard line with a helping hand from everyone wearing a blue jersey as the clock hit double zeros.

There was chaos afoot though as Wesson scrambled to get into formation ahead of the 25-second play clock running down.

The confusion came from players up and down the roster being forced into unfamiliar positions. Cramps, injuries and other issues had decimated the pool of available players for Wesson.

For much of the second half, the Cobra coaching staff had 16 players available to use.

The formation ahead of the final play had Loy with running backs on either side in a shotgun position.

He handed the ball to senior running back Lucas McRee, who ran to the right side of the line.

Tylertown gobbled McRee up with three different Chiefs grabbing him as he ran sideways, 4-yards from the blue endzone of Stone Stadium.

McRee was like a snake that refused to die, even after its head’s been knocked off. He pushed against the defenders and kept pumping his legs.

With his knee just inches from striking the turf and ending the game, McRee reached backwards and stuck the ball into the gut of freshman O’mari Johnson.

Johnson shot across the goal line for the winning conversion and a truly wild celebration was set off on the Wesson sideline.

No kidding, it got nuts. They thought a lineman was suffocating at one point.

The celebration was so much sweeter and had the intensity of a tent revival because what happened when these two teams played on the same field a year prior.

In 2021, the Cobras raced out to a big lead early before Tylertown scored 40 unanswered points for a 46-30 win.

The second half felt like a nightmare for the Wesson faithful as the game on Friday felt like a sequel of last year’s game.

One of those really terrible sequels that’s just a frame-by-frame retelling of the original.

Wesson had started on fire, getting a touchdown pass from Loy to Johnson, a Troy Byther Jr. fumble return score and a kickoff return TD from Johnson as well.

Tylertown started to wake up after spotting Wesson an early 14-0 lead, but the Cobras still had a 27-14 halftime advantage.

Tylertown scored within the first 90 seconds of the second half to make it a one score game and they’d taken a 28-27 just two minutes after that.

There were times where Wesson could have absolutely stopped fighting and given in to Tylertown. The Cobras went ahead 41-40 with just over five minutes left, only to see Tylertown take the lead back by seven points with 148 seconds remaining in the game.

Facing 4th-and-4 on their final drive at midfield, Loy couldn’t find a receiver down field and tried to tuck the ball and run for the sticks.

Just as a Tylertown linebacker closed on him, he flipped the ball with his wrist like he was shooting a free throw. The pass went over the outstretched arms of a Tylertown player and was caught by receiver Caleb Chase to extend the drive.

Wesson got down to the 1-yard line when Loy stepped up to hit Johnson with 10 seconds left on the clock.

The Cobras ran up and instead of spiking the ball, pushed Loy in on the sneak.

Siri, what’s a synonym for grit, I’m feeling at a loss for words right now.

“In 20 years, I’ve never seen anything like tonight,” said Jeremy Loy as he struggled to put words to the whole thing too. “The grittiest, toughest group of boys I’ve ever been around. I’ve never been this proud of a team.”

I agree, coach. This one will go down in Cobra lore for a long, long time.