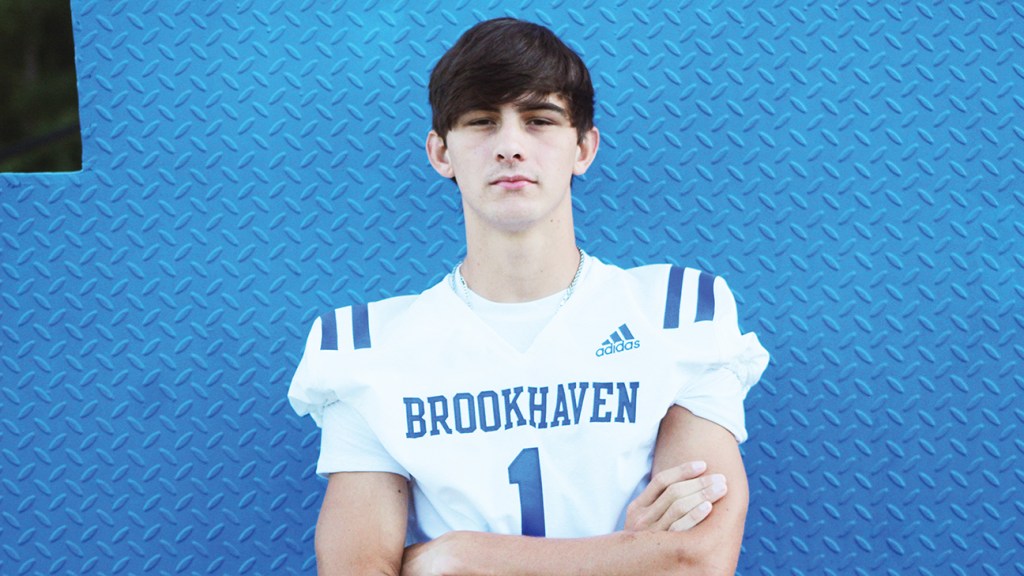 BA’s Helton is Offensive Player of the Week

Brookhaven Academy was locked in a slugfest for much of the night against Bowling Green School on Friday in the MAIS District 4-4A opener for both schools.

Coach Anthony Hart’s Cougars won by a 28-7 final score, but the contest was closer than that as BA led 13-7 in the fourth quarter.

When Brookhaven needed a big play, they relied on the arm and legs of senior quarterback Elijah Helton.

Helton finished 9-of-12 passing for 108 yards and two scores. On the ground, he rushed 15 times for 86 yards and another touchdown.

For his outstanding play, Helton has been named The Daily Leader Offensive Player of the Week.

The win moves BA to 2-1 on the season and 1-0 in division play ahead of a homecoming matchup on Friday against St. Aloysius of Vicksburg.

In the second game of the season a week prior, played at Madison Ridgeland Academy against Central Holmes Christian School, Helton was a big part of a blowout 41-14 win for the Cougars.

He rushed for 191 yards and two touchdowns and had scoring runs of 83 and 70 yards. Helton also went 6-of-12 passing against CHCS for 95 yards and two scores.

Helton got the home fans on their feet on the first BA possession of the game when he took off for a 25-yard run that took his team down to the BGS 35-yard line.

On the next play, Helton got Brookhaven on the board with a 35-yard touchdown pass to senior receiver Trevor Fortenberry.

The throw was all the more impressive because Helton got drilled on the toss by a pair of Bowling Green defenders leaping just as he released the ball.

The visiting Buccaneers from Franklinton, Louisiana showed that they planned on staying in the game on their next possession when senior Josiah Miller rumbled in for a long touchdown run that made the game 7-7 early in the first quarter.

Miller had run for nearly 150 yards in a season opening win over Centreville Academy. BGS came into the meeting with BA with a 1-1 record after losing 49-0 at Tri-County Academy the week before.

Brookhaven Academy and Helton answered on the following drive to go ahead 13-7. The possession was capped when Helton faked a handoff to freshman running back Sladen Shack, and then pulled the ball back to knife in for a 10-yard touchdown run.

The home team finally got some breathing room in the fourth quarter via another passing score from Helton.

This one was similar to the first, but instead of having two Bowling Green defenders in his face, Helton had two Bucs guarding Fortenberry down field.

Helton delivered the ball perfectly and Fortenberry plucked the pass out of the air for a 21-yard scoring play that drowned out any hopes for a Bowling Green School comeback.

A transfer who started last season under center at Lawrence County High, Helton is the answer to the question of who’d replace three-year starter Tyler Fortenberry at quarterback for BA.

Brookhaven Academy will be favored when they host St. Al (0-3) on Friday. The Cougars will then face their stiffest test of the regular season on the following Friday when they travel to Gallman to meet 5A Copiah Academy (3-0).