Brookhaven Board of Aldermen, Police Department at odds on promotions 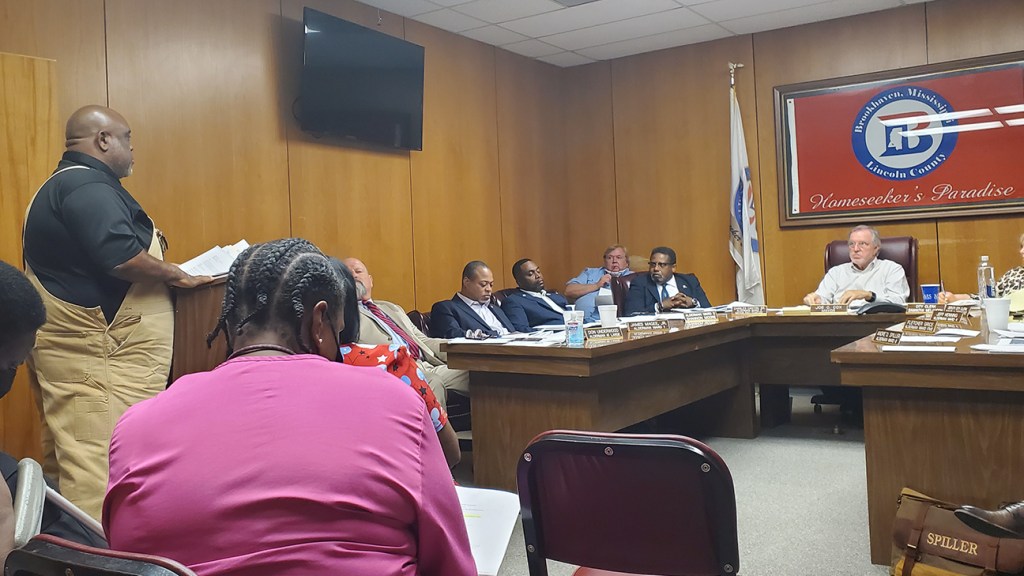 PHOTO BY BRETT CAMPBELL Brookhaven Police Chief Kenneth Collins addresses the City Board of Aldermen during its regular meeting.

Brookhaven’s top police officer and a few aldermen did not see eye-to-eye Tuesday on the specifics of proposed promotions in the department.

Alderman-at-large Don Underwood asked Chief Kenneth Collins to explain the organizational structure of the department — how many people were in each rank.

“Understand I’m not against these individuals getting pay raises. I’m sure they deserve it,” Underwood said. “What I’m questioning is whether the title needs to go with it.”

“Yes,” was the chief’s simple reply.

“I have a question about corporals — How many do we have?” Ward 6 Alderman Andre’ Spiller asked.

“I’d have to look to see,” Collins said. “It changes so often I don’t know an exact number.”

“On (these three), they would get corporal pay because …?” Spiller asked.

“Training. They’ve been to the training academy. We’ve got to promote the lower people who are answering calls, chasing people, etc., to get them to stay,” said Collins.

“We’re not concerned with you wanting to advance people,” Underwood said. “But your department is under a military structure. We need different levels of patrol. You’ve got almost as many corporals as patrol.”

“We have supervisors — captains, lieutenants, sergeants,” Collins said. “If you don’t promote these young officers, you’ll lose them.”

“What about a step up in pay but not in rank?” Jeff Henning asked.

“You need young people to take command and help the sergeants,” Collins said. “You entrust these young people to lead. These three deserve to be promoted. In an ideal situation, you could (increase pay without promotion), but other agencies are taking them, because they’re offering higher pay and promotions. You’ve got to give young people an incentive to stay.”

“We’d like to try to help keep officers and we’re not opposed to that,” Underwood said. “You need that organizational structure, like two captains, two lieutenants …”

“We have that structure,” Collins said.

“And they earn their pay,” said Collins.

“I don’t doubt that,” the alderman said.

“Can we go ahead with the financial part but not the titles? We need to move on,” Mayor Joe Cox said.

“I just think we need to make them corporals. They deserve this,” Collins said.

“Are they given more duties with the titles, expected to do more?” Henning asked.

“Yes, they are expected to do more,” Collins said.

“They do more, and they earn their pay,” Collins repeated.

“We’re not debating that. We want to give them the money,” Underwood said.

“Let’s bring it back up under executive session,” Mayor Cox said. Attorney Bobby Moak nodded in agreement, and the meeting moved to the next items on the agenda.

Later in the meeting, when Chief Collins was asked if he had a report, he stood and addressed the board.

“Yesterday we had 182 public service calls — unlocks, jump starting a battery, helping people — in addition to assault calls,” Collins said. “For the past month, we’ve been chasing kids with guns. They’re riding like they’re in Iraq. I’ve been spit on twice. My officers deal with so many things y’all don’t understand. We made an arrest in the Jerrivonte Harris [homicide] case. We can’t give out details in the newspaper for an ongoing investigation.”

“We’re in charge of protecting you; we’re in charge of protecting everybody. Unless you are out here, you cannot tell me how to run the police department. You can’t,” Collins continued. “I’m out answering calls. I don’t sit in my office. We’re all out answering calls. If you don’t like me, that’s fine, but love your city more. I might not be the one you want now, but I’m the one you’ve got. We’ve got to make split second decisions, but you can sit back and second-guess us. I love my city. I’m willing to die for my city and any one of y’all. All my guys are willing to, too. Unless you are doing my job, you can’t tell me how to do my job. How many of y’all have been shot at? Multiple times? And these parents are helping their kids. They’ve converted these weapons to automatic, basically making them machine guns. We have to deal with these people every day. We have to face this and then we have people second-guessing us. Unless you wear my shoes, you can’t walk in them. I’m finished.”

Collins took his seat and no one responded to his comments.

After a closed-door executive session at the end of the meeting, the board voted unanimously to approve the requested promotions for Kyle Mossman, Kelsie Evans and Ashley McDuffey, with pay increases from $34,562.14 to $37,745.76 annually. Following the meeting, Underwood asked Chief Collins to provide the board with a printed organizational structure of the police department.

During Alderman Spiller’s report time, he asked who in the BPD received one of the newly acquired five vehicles, and why he had not seen them on the streets.

Collins said Det. Sgt. Penny Banks got one of the new vehicles, and her old one was rotated to Det. Sgt. Vincent Fernando. Fernando’s vehicle was totaled when he was struck by another vehicle and knocked into a third.

“One is in the shop for up-fit” with proper lights, etc., Assistant Chief Earls said. “The other three are waiting to be up-fitted, either for parts or are in line for the work.”

Earls explained that vehicles with high mileage are assigned to a single driver and not driven 24 hours a day, because they tend to last longer that way.

“We don’t put (patrol) in newer vehicles. The ones will less miles go to detectives, who don’t drive them as often, and it keeps mileage low, making them last longer,” Earls said.

“We have two Explorers and two Durangos for these investigators,” Spiller said. “What bout the police officers going to these calls? Investigators don’t go to all these calls.”

“Cars are rotated out to the officers from the investigators,” Earls said. “We enacted this because it helps the vehicles last longer.”

In other business related to BPD,  the board: