Loyd Star puts Salem on running clock in first half 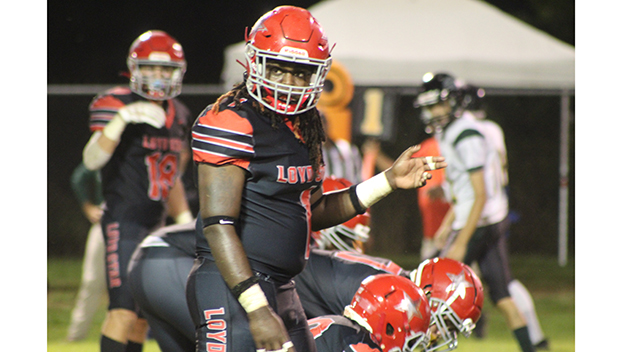 The clock on the scoreboard at W.E. “Sambo” Smith Field ran non-stop through much of the game Friday after Loyd Star invoked the 35-point mercy-rule with seven minutes remaining in the first half against visiting Salem. The Hornets won 60-0.

The 1A Wildcats (0-3) from Walthall County are led by first year head coach and Loyd Star alum John Smith. Smith came to Salem as an assistant coach last season and had previously been an assistant at Yazoo County High before moving back to live in Lincoln County.

Salem was 0-9 last season and is seeking to snap a 26-game losing streak that dates back to 2019.

Smith knew he was inheriting a program that would need much foundational work done as the last winning season for Salem was in 2014. There is only one senior on Smith’s first team at the school.

The Wildcats have also dealt with some injuries and started 8th-grader Rustin Shoemake at quarterback against Loyd Star.

A promising first drive for Salem ended when senior Carter Holcomb picked off the Salem quarterback to give the Hornets the ball.

Smith bruised his way through the Salem defense for a 41-yard gain down to the Wildcat 10-yard line. Goodwin opened the Loyd Star scoring one play later as he dragged a couple Salem defenders in for a 10-yard rushing touchdown.

The next Loyd Star possession was more of the same as Smith bullied through the Salem front seven for a 25-yard run. Goodwin again punched it in with a physical run, this time from the 13-yard line.

Goodwin added a 38-yard touchdown run with 45 seconds left in the first quarter that put Loyd Star up 21-0.

Salem turned the ball over on the next possession with a fumble recovered by Loyd Star freshman lineman Joe Taylor.

The Hornets then went to the air with a 21-yard touchdown pass from Nathan Mills to Garrett Carwyle.

Mills dropped back and threw a dime in the corner of the east endzone that Carwyle caught in stride.

Cooper Strickland banged through one of his many PAT kicks of the night to make it 28-0.

The Loyd Star defense scored twice in the first half with a safety and a 30-yard interception returned for a touchdown by Carwyle.

Smith also had a 27-yard rushing touchdown in the opening 24 minutes as Loyd Star led 44-0 at halftime.

Loyd Star was without senior ball carrier Bryce Ford, who was out with an illness.

The LS coaching staff was able to substitute liberally in the second half.

“I liked that we didn’t have a let down in the second half when we played our young guys tonight,” said Loyd Star head coach Bryan Ford.

Next up for the Hornets is a trip to Eastonville to face North Forrest High on Friday.