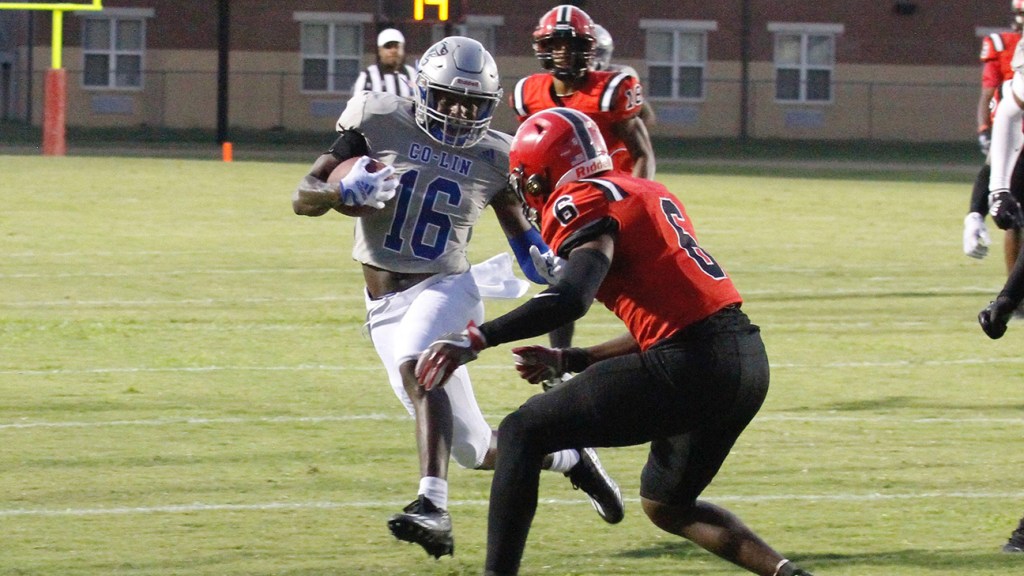 Photo by Co-Lin Sports Info Co-Lin receiver Antrelle Sims (no. 16) cuts towards the end zone Thursday for the Wolves against Mississippi Delta. CLCC is now 1-1 in 2022 after racing past the Trojans with a big second half effort.

After spotting Mississippi Delta a 7-0 lead on the first possession of the game Thursday in Moorhead, the Copiah-Lincoln Wolves defense didn’t surrender another point in the Mississippi Association of Community Colleges Conference (MACCC) matchup between the schools.

The CLCC offense woke up too and in doing so gave the Wolves a 37-7 win that makes coach Glenn Davis’s squad 1-1 on the season.

Co-Lin got on the board in the first quarter when freshman kicker Corey Case (Brookhaven Academy) nailed a 28-yard field goal.

Quarterback DeVon Tott (Mandeville, La.) bounced back from a second quarter interception to throw his first touchdown of the season on the drive after the turnover.

Tott hooked up with receiver Antrelle Sims for a 21-yard scoring throw.

Sims, a Wesson product, played at Mississippi Gulf Coast last season before transferring back home to Co-Lin in the spring.

The Wolves started the third quarter by throwing an interception on their opening drive and then saw Delta miss a field-goal on the following possession.

The offensive breakthrough came for Co-Lin on a drive that started on their own 25-yard line.

A rush by freshman running back Johnnie Daniels (Crystal Springs) picked up 33-yard on the first play of the possession and then it would be Daniels who capped the drive off with a 28-yard touchdown pass from Tott on a screen pass.

The Wolves defense then kept momentum in its favor when sophomore lineman Kadarius Miller (South Pike) forced and recovered a fumble on the first play of the next Delta drive after Co-Lin had pushed the lead to 17-7.

Taking over on the MDCC 25-yard line, the Wolves used three straight rushes by sophomore running back Kyjuan Henderson (Jacksonville, Fl.) to cover the distance.

Henderson, a transfer from Colorado State University, ran the final 10-yard for a touchdown that made it 23-7 with seven minutes left in the third quarter.

Sophomore running back Antonio Luckett (Leake Central) kept the Co-Lin ground game rolling in the fourth quarter with a 32-yard touchdown run that came with 11:07 left in the game.

The scoring for Co-Lin was wrapped up in the fourth quarter with an 8-yard touchdown run by Henderson.

Tott, a transfer from McNeese State University, finished 20-of-38 passing for two touchdowns and two interceptions for 217 yards.

CLCC did it’s most damage on the ground with 212 yards rushing. Herndon led the way with 92 yards on just 11 carries.

Ja’Len Sims — a University of Memphis transfer who plays linebacker — was the top tackler again with 10 tackles, including two sacks.

Next up for Co-Lin is the home opener against no. 9 Jones College on Thursday at 6:30 p.m. in Wesson.

Jones showed they might be the team to beat in the MACCC with a 42-28 win over no. 5 East Mississippi on Thursday night.

In other MACCC action from around the state this week, Mississippi Gulf Coast made the long trip to Fulton and brought back a 37-13 win over Itawamba, Pearl River moved to 2-0 on the year with a 20-13 win at Northeast Mississippi, Holmes got its first win of the season 41-37 over East Central, Northwest Mississippi survived Hinds 31-28 in Raymond and Coahoma beat Southwest 28-15 in Summit.