Gridiron 2022: Sartin and Bobcat football have been a perfect fit for over two decades 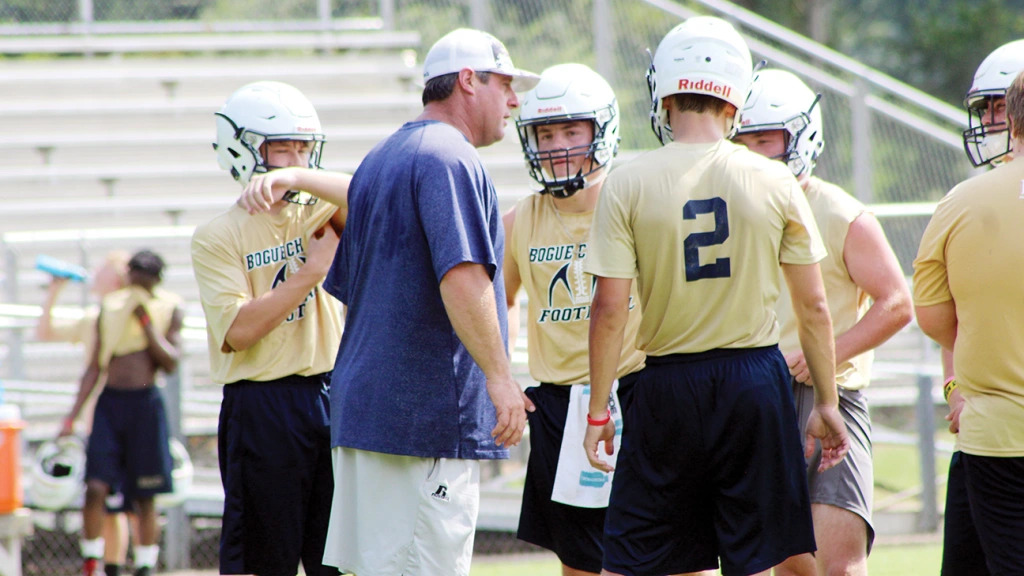 FILE PHOTO The 2022 season will be year no. 21 for Gareth Sartin as the head man for Bobcat football.

Just as the 2018 high school football season was beginning, I took the position of sports editor at The Daily Leader.

One of the first Friday nights that I came to the office after watching a local game, I noticed a post-it note beside the computer of news editor Brett Campbell.

“Gareth Sartin only has one r” read the note.

I felt almost like the paper was meant for me, because I was pretty sure that I’d made the mistake of misspelling the Bogue Chitto football coach’s name already in my first month of writing.

“It’s just a reminder to get it right,” said Brett. “A very kind lady called me one day to correct me.”

Nowadays, neither Brett nor I need that reminder anymore.

The 2022 season will be year no. 21 for Sartin as the head man for Bobcat football.

A better write than me would have used last year’s Gridiron for a retrospective, but now is just as good a time to look back as Sartin’s time at BC now nears a generation.

Carl Cole coached BC for four years and ended his time at the school with an 11-2 team in 2001.

Sartin took over a young squad in 2002 and that team finished with a 3-8 record. The next year, the Bobcats had one of the best rebounds in all of 1A as they finished 9-4 overall in 2003.

He won his first career playoff game with a 38-24 over South Leake, before BC was eliminated by Scott Central in the second round that year.

The program then built momentum over the next decade that culminated with a three-year run from 2011-2013 that saw the Bobcats go a combined 31-7 during that span.

The 2012 season was a special time as huge crowds came to Troy Smith Field each week to see one of the greatest Bogue Chitto teams in school history. The Bobcats finished the regular season unbeaten and set school scoring records.

The dream of a state title ended on the road in the 1A semifinals as Stringer took a 21-7 win in Jasper County. BC had beaten Stringer 34-28 in an instant classic at home during the regular season.

Injuries late in the season derailed a title bid for the Bobcats as Stringer won the 1A title over French Camp a week after beating BC.

Small school football is one of ebbs and flows though and just as BC was on the mountain top for a run, the Bobcats had a period that saw wins become hard to come by.

I once saw a status written by Sartin’s wife Jessica that was shared on social media. I don’t remember her words exactly, but the gist of what she said was, “the fond memories that you have for the teams that lost more than they won are often times the strongest.”

Good coaches don’t just suddenly forget how to coach, and no one wins forever.

South Panola was an absolute dynasty at one time, but they inevitably like every other great team before them came back to earth.

Sartin has led Bogue Chitto through the peaks and the valleys — both professionally and personally.

Before I ever met him and became his friend, I remember praying for his oldest son Felder weekly with my church on Wednesday nights.

Felder Sartin was diagnosed with leukemia in 2008. The Bogue Chitto community and Lincoln County as a whole rallied around the Sartin family

Last season, Felder Sartin was a starting offensive lineman for his dad on a Bogue Chitto team that finished 8-3. This year, Sartin will get to again coach his youngest son Easton, a junior running back and linebacker for the Bobcats.

“It’s a blessing to be around your kids and to watch them grow up on the same campus where you work and then to coach them and share a lot of moments on the field, it’s really been a true blessing,” said Sartin.

Gareth Sartin is the product of the now closed Dexter Attendance Center. Growing up in a small community in Walthall County that wasn’t much different than the one he works at now, his fit with Bogue Chitto is one that makes sense.

Both he and his brother Bill Jr. were football standouts that then moved on to Mississippi State. Their dad, Bill Sr., coached at both Dexter and Franklinton High (La.).

Bill Jr. was an assistant coach at Brookhaven High and then head coach at Meridian High before getting out of coaching.

Gareth Sartin has worn more hats than a haberdashery could hold during his time at Bogue Chitto. He’s coached varsity basketball when there was no one else to do it and he’s also been the head baseball coach during his career.

He’s taught, served as athletic director and patrolled the campus as an administrator.

By his side for most of that time, he’s had assistant coaches Adam Moak and Chad Norton working on his staff.

Sartin’s teams run their offense with precision that comes from repeated practice. The team always plays the game with great effort and a grit that their coach demands.

Watch him address his group after a game or practice, and you’ll see his boys with one knee on the ground and their eyes glued to their coach.

He’s their leader and the Bobcats always look ready to follow him wherever they’ll go.

“I feel like I’ve been very fortunate,” said Sartin. “I’ve gotten to work with and for some good people like Coach Norton and Coach Moak. I’ve gotten to coach many, many fine young men. One thing we try to instill in them is to take pride in what you do and play hard in order to compete. Most of the time over all those years, we’ve done that and that’s all you can ask out of the kids.”