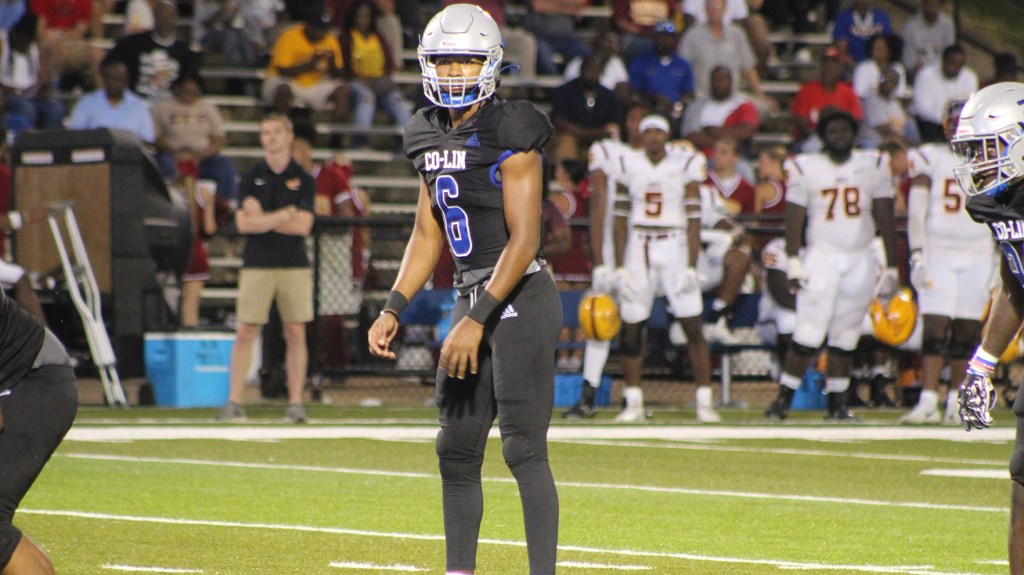 PHOTO BY CLIFF FURR Quarterback Devon Tott passed for 286 yards and rushed for 84 more yards on the ground Thursday in a close loss to Jones College in Wesson.

The No. 6 ranked Jones College Bobcats did just enough on Thursday in Wesson to take a 23-17 win over Copiah-Lincoln CC in the MACCC South Division opener for both schools.

Co-Lin (1-2, 0-1) never led in the game, but kept the Bobcats (3-0, 1-0) within striking distance all night and dominated time of possession by controlling the ball for 13 more minutes than Jones.

Turnovers were the difference as CLCC gave the ball away four times in the game while JC only had one turnover on the night.

Jones led 10-0 at halftime and the feeling on the Co-Lin sideline was one of frustration as a promising drive for the Wolves ended on the Jones 30-yard line when the Bobcats forced a fumble with 30 second left in the second quarter.

A Corey Case (Brookhaven Academy) 25-yard field goal got Co-Lin on the board in the third quarter but was again part of a drive that left the Wolves wanting more.

Co-Lin had an apparent touchdown called back due to an illegal formation penalty, but also benefitted from a Jones penalty on the possession that helped the Wolves run seven plays from inside the 10-yard line before the field goal try.

An 8-play drive on the next possession for the Wolves covered 88-yards and tied the game at 10-10 when CLCC quarterback DeVon Tott (Mandeville, La.) ran in from 5-yards out.

The Co-Lin defense played winning football in containing sophomore running back Robert Henry of Jones. Henry came into the game averaging 204.5 yards per game and had swept MACCC Offensive Player of the Week honors in the first two weeks of the season.

Though Henry did score three touchdowns on Thursday, he was limited to 94 yards on 24 carries and averaged just 3.9 yards per touch.

The Bobcats used two quarterbacks on Thursday in sophomore Alan Follis and freshman DJ Smith. Follis was an MHSAA state champion in his prep career at West Jones while Smith led a dominating MAIS program at Greenville Christian last season as a senior to a state title as well.

That drive was set up by an interception in the endzone by the Jones defense.

Co-Lin then responded with a drive that produced the biggest cheer of the night as they covered 64 yards in just four plays and pulled even when Tott found Tyquan Henderson (Canton HS) on a 29-yard touchdown pass with 9:10 remaining in the game.

Less than two minutes later Jones was back ahead when Henry scored on his longest run of the night from the 18-yard line for the final score of the game.

CLCC receiver Antrelle Sims was tackled at the JC 6-yard line as time expired to extinguish a last-second scoring threat from the Wolves.

Andrew Johnson, a freshman defensive back from Olive Branch, led the Co-Lin defense with 10 tackles.

The Wolves and head coach Glenn Davis make the short drive to Summit next week to continue division play with a matchup against the Southwest Bears.