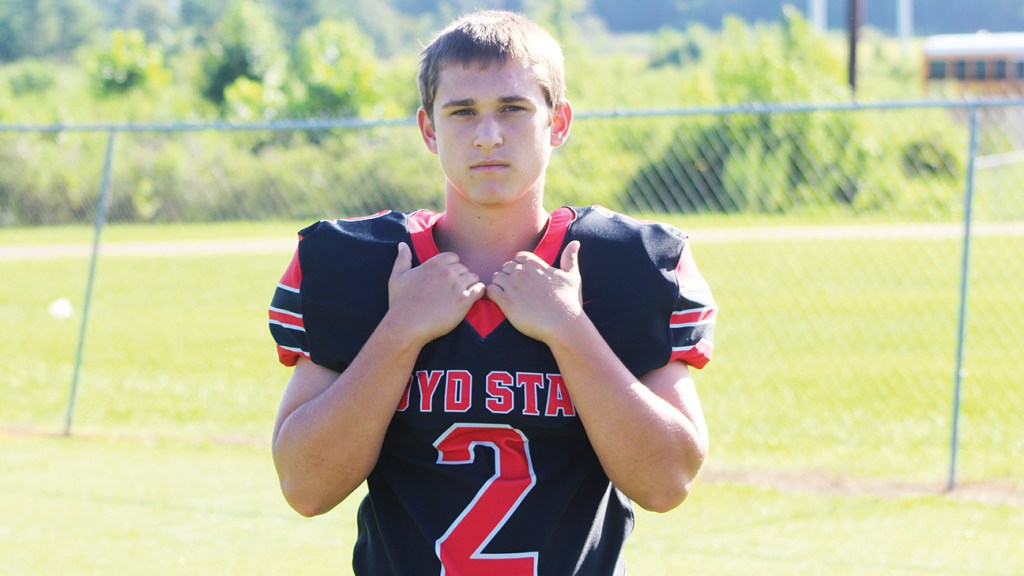 Carter Holcomb is Defensive Player of the Week

Playing on both offense and defense is part of life for many football players at the high school level throughout Mississippi — especially at a 2A school like Loyd Star.

Head coaches would prefer to be able to rest their quarterback when the defense is on the field, but sometimes they’re left with no choice, sometimes you’ve got to put your best 11 out there together.

A linebacker on defense, Holcomb made seven tackles (three solo), caused a fumble and had a tackle for a loss in a 30-0 win for Loyd Star over North Forrest on Friday.

For his outstanding play, Holcomb is The Daily Leader Defensive Player of the Week.

The win was the third straight shutout for the Loyd Star defense.

Holcomb has kept his parents busy running the roads to follow his career during high school as he’s played football, basketball, baseball and soccer.

He’s the type of selfless competitor that makes whatever team he’s suiting up for better.

Last season was Holcomb’s first as a full-time starting quarterback for the Hornets. He was a Daily Leader All-Area selection following the season as a signal caller.

In 2021, he passed for 904 yards and threw for 10 touchdowns while also rushing for three more to help lead Loyd Star to a Region 7-2A title.

Holcomb hasn’t had to throw for a score thus far in 2022 as the Hornets have smashed through opposing defenses with their running game.

This year’s version of the team has also had the luxury of junior Nathan Mills as a quarterback that can take reps from Holcomb.

Mills has thrown for a pair of touchdown passes thus far in 2022.

Ford had said that Mills would see an increase in usage this season and it wasn’t a reflection on how well Holcomb had played as the starter at QB, but it was more about how important his play is for the Loyd Star defense.

It’s not every day that you don’t want your starting quarterback getting hit because you need him at linebacker.

As a defensive backer, Holcomb has 30 tackles thus far in his senior season, including 13 solo stops.

Oh yeah, he’s also returned a kickoff 58-yards and had a 53-yard punt while doing that job.

We live in the age of specialization, where kids are giving up multiple sports at younger and younger ages to focus on playing just one.

Holcomb is a throwback who’ll play whatever game you’ve got to offer involving a ball and will man whatever position his coach needs him in for the greater good of the team.