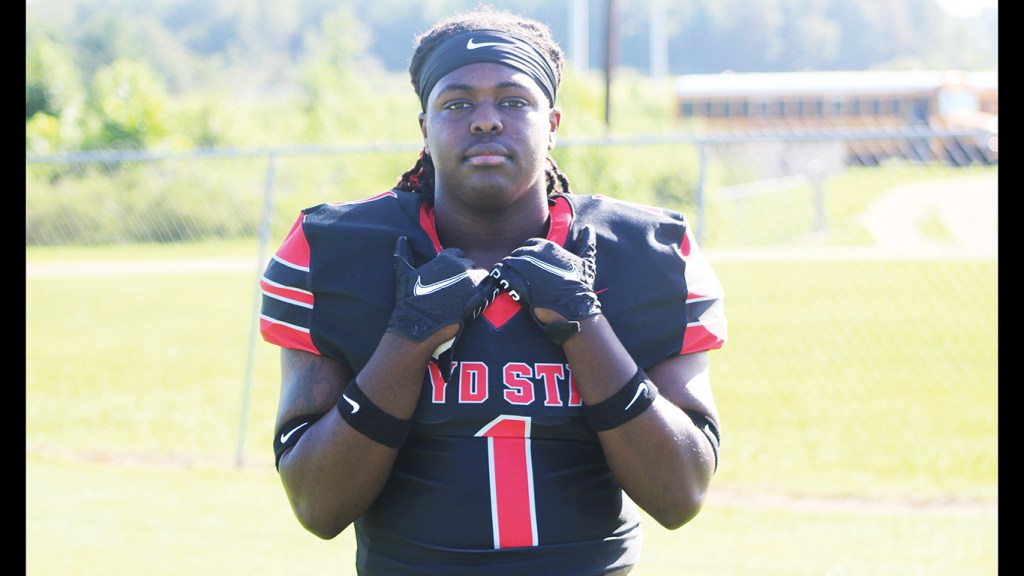 Julius Smith is Offensive Player of the Week

Loyd Star senior fullback Julius Smith has embraced his role as a north/south runner within the evolution of the Hornet’s offense over the last couple seasons.

On Friday at North Forrest, Smith put in a workmanlike effort of 15 carries for 106 yards and two touchdowns to help put the game away in the second half of a 30-0 win for Loyd Star.

For his efforts, Smith has been named The Daily Leader Offensive Player of the Week.

Smith averaged 7.1 yards per carry and had a long run of 29 yards as Loyd Star hammered the ball in the second half after leading just 10-0 at halftime over the home-standing Eagles.

It was a season high in carries for Smith and the first game for the senior Loyd Star leader to top the 100-yard mark in a game.

On the season, the 6-foot, 215-pound Smith has carried the ball 34 times for just under 300 yards and six touchdowns in helping the Hornets jump out to a 3-1 start on the year. He’s also caught three passes for 36 yards and a score and made 12 total tackles as a defensive end.

His career is a good example of a player finding the role that fits him best and making his team better with his talents.

As a freshman, he saw limited varsity action for a Loyd Star team that went 2-9 in 2019.

The 2020 LS team then went 3-6 with Smith primarily playing quarterback.

Hornet head coach Brian Ford praised the buy-in of his team ahead of last season’s 2021 campaign as the offense was tweaked to take advantage of a veteran offensive line and a deep pool of ball carriers.

Those moves paid off in a big way as Loyd Star finished last season with a 9-2 record and an unbeaten mark in Region 7-2A.

After the season, Smith was tabbed for the Daily Leader All-Area team as a tight end. He caught 14 passes for 273 yards and three touchdowns. On the ground, he rushed 83 times for 543 yards and 10 scores.

Tight end, fullback, h-back —it doesn’t matter what you label him, he’s just a dude that excels with he ball in his hands.

The versatility of Smith has only made Loyd Star better as he splits carries with senior Bryce Ford and junior James Goodwin. Ford ran for 94 yards and one touchdown against North Forrest while Goodwin chipped in 70 more yards on just nine carries.

The starkest change from Smith as a sophomore quarterback to now is the physicality with which he plays.

His first touchdown run of the game against North Forrest went right through the gut of the Eagle defense. North Forrest tacklers stacked up to stop Smith from reaching the goal line, but his offensive line came in and pushed their teammate across and into the end zone.

Smith doesn’t run from contact — he runs towards it and has become adapt at ducking his shoulder and keeping his feet if the first defender doesn’t wrap him up.

Smith and the potent Loyd Star rushing game are back on the road Friday when they travel Jasper County to take on the Stringer Red Devils on Friday.