Police chief: Gangs have ‘more weapons than we do’ 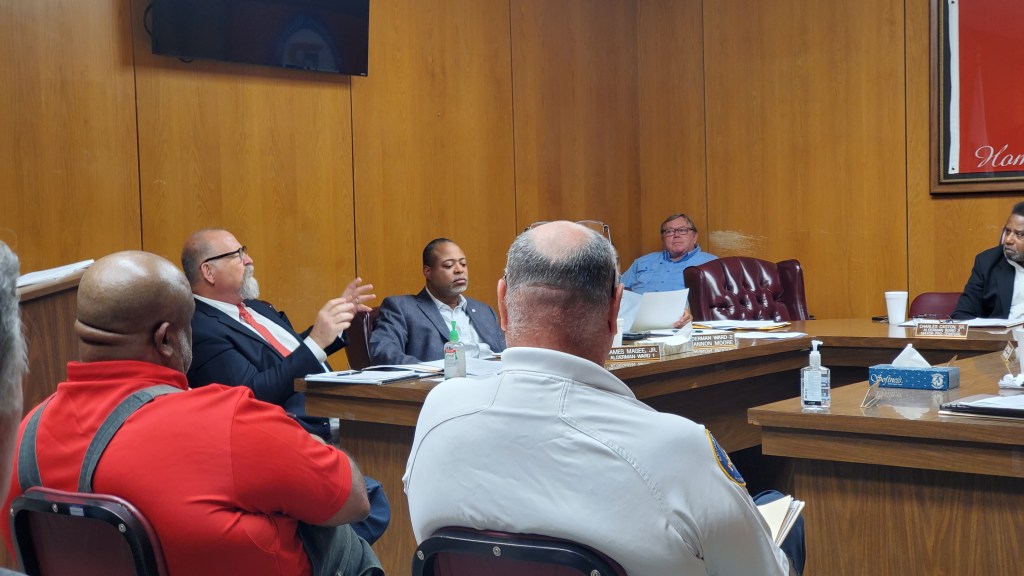 PHOTO BY BRETT CAMPBELL Alderman-at-large Don Underwood tells the rest of the City Board that police pay must be reassessed to make Brookhaven competitive with cities of similar size in Mississippi.

“They’ve got more weapons than we do,” Brookhaven Police Chief Kenneth Collins told the Board of Aldermen Tuesday about recent gang activity in the city. “They’re walking around with awesome firepower, age 10 and up.”

Though officers have been working around the clock to an investigation into the Sept. 13 shooting death of Mashonna Dunnigan, progress is difficult because people are afraid to talk, Collins said.

“We’ve been working on this, but the public doesn’t want to talk. We have some suspects,” he said. “We haven’t had much sleep. We’ve all been working on it. We’ve upped patrols and we’re working on gang identification.”

“We’re doing our best to keep Brookhaven safe. If we all work together, I think we’ll be alright.”

Alderman-at-large Don Underwood said he gives kudos to Chief Collins and Assistant Chief Clint Earls for their work in providing and explaining a department organizational chart since the last aldermen meeting. He also expressed concern over how Brookhaven’s police pay compares to other cities of comparable size in Mississippi.

“I know it’s been mentioned a few times but now I’ve seen it with my own eyes,” Underwood said. “Our base pay for officers is way below the (Lincoln County) Sheriff’s Department, which is immediate competition. We are way below the school officers. We are below all but one department in the state, and those above us aren’t even close.”

“We’ve got to revisit that and do something about it,” said Underwood.

In other BPD business, the board:

• Hired Laneesha Brady as a dispatcher with the Police Department, pending drug test and physical.

• Withdrew the offer of employment to Anthony Harris as an officer. Harris did not complete the requirements for the position.

• Hired Bradley McCoy as a certified patrolman with an annual salary of $34,562.12, pending drug test and physical. He has been a Gulfport police officer and is from Enterprise.

• Approved Sgt. Jonathan Hart to attend the Total Control Training Institute Inc. in Yazoo City Oct. 17-21. The City will pay registration of $650 and reimburse for meals and mileage.