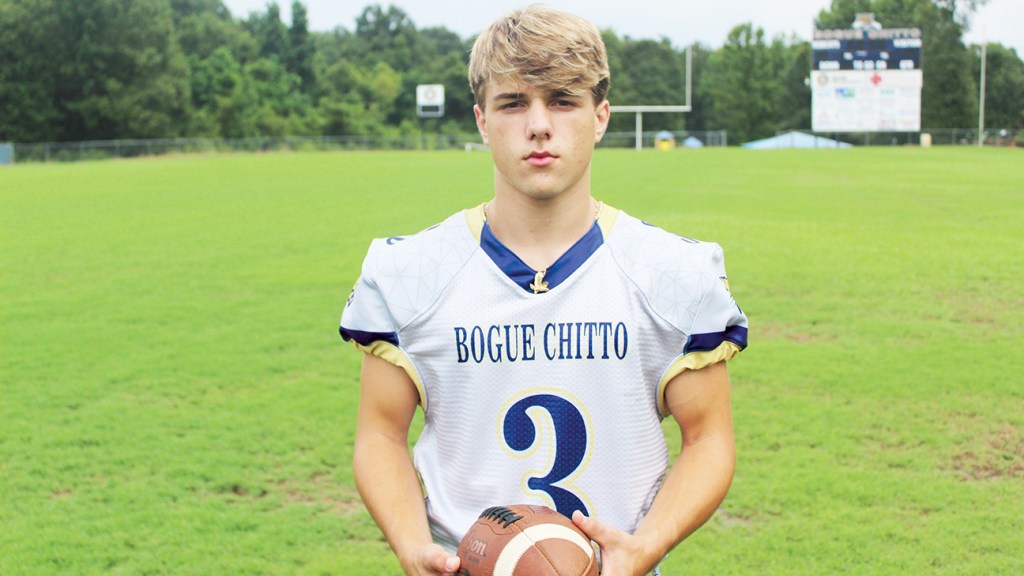 Colton Frith is Offensive Player of the Week

The Bogue Chitto band is the newest musical outfit amongst the area schools.

Under the direction of its leader, Drew Different, the Bobcat band hopes to be an all-superior marching unit one day.

If they ever lack for an example of what it looks like to have a director, the band need only look at their senior quarterback — Colton Frith.

Friday in a 27-7 win over previously perfect Puckett High, Frith had the Bogue Chitto offense playing all the right notes up and down Troy Smith Field.

For his outstanding play, Frith has been named The Daily Leader Offensive Player of the Week.

Frith finished 6-of-12 passing for 115 yards and one score. On the ground, he rushed 13 times for 57 more yards and two touchdowns.

A three-year starter at signal caller, Frith is so at ease and in-control of the Bobcat’s balanced offensive attack.

There isn’t a height listed for Frith on the BC roster, but you don’t need one to see that he’s not going to get things done by trying to power over every defender.

What he might lack in inches of height, he makes up for in sheer effort.

Watching Frith fake the handoff and then shoot towards a defensive end that’s trying to play the pitch — it’s like whoever’s controlling him in a game of Madden has the turbo button held down.

All that to say, he plays a wide-open style of football.

That’s part of what makes the misdirection and fakes within coach Gareth Sartin’s Bogue Chitto offense so hard to stop.

All the players, from the lineman to the receivers, execute each cut or feign with full bodied conviction.

You just know the running back that’s coming around on a sweep has the ball in his hands, only to see that the handoff was a ruse and Frith is 10-yards down field being brought down by a safety.

Frith started out the first offensive possession against Puckett with a run before he next handed off to Jax Leggett.

Frith then attempted a pass that was caught by Noah Magee. He then handed out to big halfback Isaiah Collins before taking off on another un.

Then Frith hit Leggett on a short throw before handing the ball of to senior Cameron Williams for a gain.

Another handoff gained 14-yards by Collins and set BC up on the Puckett 1-yard line where Frith punched it in on 1st-and-goal.

Nine plays, every one for positive yards and five different Bobcats got a touch on the tone-setting drive that was synched up like a symphony — directed by Frith.

Bogue Chitto looks to keep playing the hits on offense when they host county rival West Lincoln on Friday at 7:30 p.m.