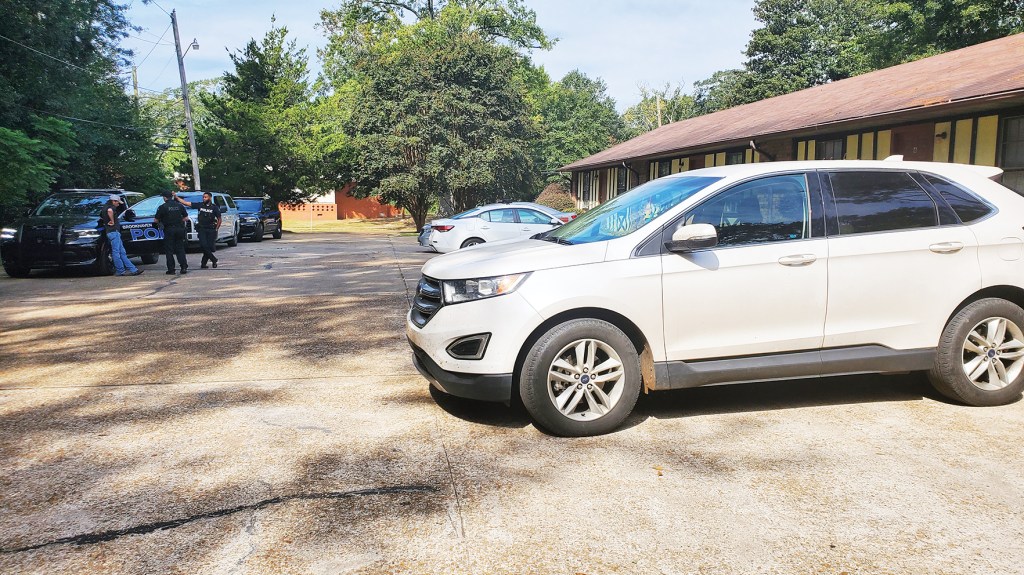 While thousands of people were enjoying the Ole Brook Festival in downtown Brookhaven this past weekend, a few others were dealing with dangerous criminal activity.

Someone fired gunshots into a home on West Enterprise Street Friday night around 10 p.m. A man taking out the trash from a business on Industrial Park Road was robbed by two masked individuals Friday night around 11 p.m. A woman was also carjacked in front of Gregg’s Office Supply on South Jackson Street Saturday afternoon.

“I’m glad the young lady wasn’t physically injured,” said Brookhaven Police Chief Kenneth Collins. “It only takes a few seconds to commit a crime. They wait for the ‘perfect victim,’ and in a few seconds they’re gone.”

Multiple agencies are assisting Brookhaven Police Department in the investigation, Collins said. Officers and investigators have been working on the cases around the clock, the chief said, doing “the best we can with what we’ve got.”

The mid-size Ford SUV was recovered Tuesday morning in the parking lot of an apartment complex near the intersection of North Jackson and Shadyside streets. According to police officers, the owner of the complex called it in.

“It was found as-is, locked, with the driver’s seat laid back,” said BPD Assistant Chief Clint Earls. “There are nine apartments in this complex. We have knocked on all the doors and questioned all the residents. We’ve gotten conflicting stories as to how long it’s been here.”

The car was towed by Porter’s Body Shop to the BPD station for forensic processing. No security cameras are installed at the complex, Earls said.

Ever since he took office, Collins said, he has asked the City of Brookhaven and all businesses to have cameras installed facing the road, overlapping one another, in order to catch illegal activity or possibly prevent it. Homeowners that can afford to do so should do the same, he said.

“In a day and age when people refuse to testify, that’s the future of law enforcement,” Collins said. “I’ve tried to modernize this city. Cameras are not afraid to testify in court.”

Collins said he has repeatedly asked the city for cameras, a crime scene technician, and more funding. Pay needs to be increased for officers in order to make the department competitive with other agencies that pay higher salaries, “or we’ll always be short-handed,” he said.

Criminals from other areas are coming into Brookhaven more often, bringing guns with them, and children as young as age 10 are armed and dangerous, the chief said. People who complain about what the department is doing have not put in the hours and effort to solve and prevent crimes, and don’t put their own lives on the line for their community like the police do every day, according to the top officer.

“It’s easy for people to place blame. But they’re like empty wagons making noise,” Collins said. “We’re out here living it every day, trying to keep people safe. We need help from the community and parents. We can’t raise people’s kids. I can’t do it by myself. It’s going to take everybody to help us.”

When a camera system was installed and made operational in the Cloverdale housing project, crime was cut significantly and several crimes were solved as a result. Cooperation from the community and city’s leadership is needed to repeat that success elsewhere, Collins said.

“When I ask for things to be done, it’s for the sake of the community,” the chief said. “We need to spend our money wisely on the police, fire department and infrastructure. It’s worth putting the money forward, a little more in each budget.”

It will take money and community support to accomplish all that’s needed, said Collins, but it will be worth it.

“Everybody needs to get on board and help me get the stuff to keep this city safe,” Collins said. “I can see the storm that’s coming. Give us the things we ask for. Give us the money we deserve.”

“Those who keep blaming the police department, we’re out here working long hours each and every day to keep our city safe,” he said. “Step up and give us the support we need.”