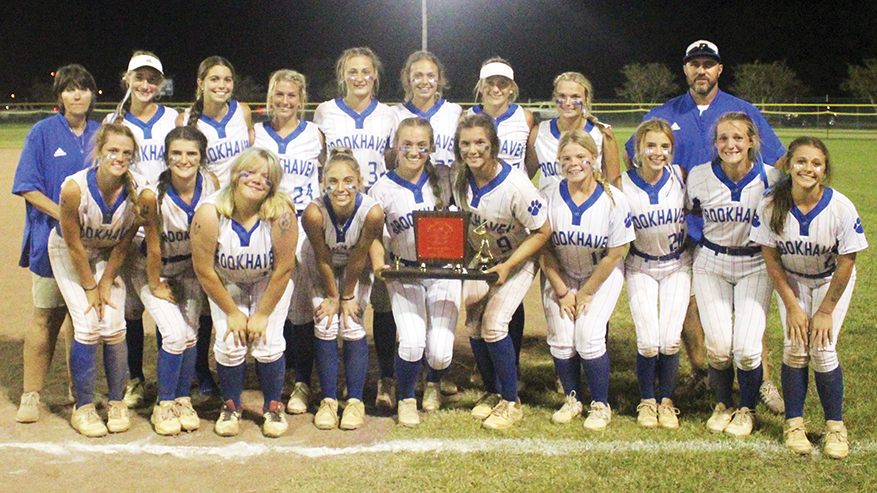 Photo by Hunter Cloud The 2022 Brookhaven Academy softball team will play for the MAIS 5A softball championship this week in a three-game series against Oak Forest Academy. BA hosts game one of the series Wednesday at 6 p.m.

The Brookhaven Academy softball team was efficient and effective in its first three games of the MAIS 5A State Tournament and now sits two wins away from repeating as state champs.

Game one of the best-of-three championship series is scheduled for tonight at 6 p.m. against Oak Forest Academy at the Cougar’s on-campus ballpark. Game two will be played at Oak Forest on Thursday at 6:30 p.m.

If a third and deciding game is needed, it will be played Saturday at Brookhaven Academy at a time to be determined later.

Brookhaven Academy never trailed in their opening 4-2 win over Bayou Academy of Cleveland.

The Cougars started hot when leadoff batter Bailey Parks hit a double and then moved to third on a single by Morgan Chemin in the first inning.

Chemin stole second and Parks scored on the play, which led to Chemin gaining third. She then scored on a ball hit by senior Sasha King to put BA up 2-0.

Bayou tied the game at 2-2, but a pair of runs by BA in the bottom of the sixth proved to be the difference.

Alayna Daigle drove in both runs via a single that scored courtesy runner Karci Case and Annaston Poole.

Sophomore pitcher Kensy Covington pitched a gem in striking out 12 and giving up two runs on three hits over seven innings.

Covington stayed hot in the second game on Saturday by striking out eight and giving up a single hit in a 3-1 win over East Rankin Academy that kept BA on the winners’ side of the bracket.

The win over ERA was another nerve-racking affair for Cougar fans and supporters as the team again went ahead early and then broke a late tie.

King, the BA catcher, got on base with a single to start the second inning. She was replaced by Case as a courtesy runner.

Case stole second and gained third on a passed ball, she then scored on a single by Covington.

East Rankin tied the game 1-1 and the score stayed that way until the top of the seventh inning. That’s when Maggie Rushing reached via a one-out single and was replaced on the base paths by Case.

Parks hit into what looked like a fielder’s choice, but errors by the ERA defense ended with both her and Rushing scoring on the play to make the score 3-1.

On Monday, BA returned to Magee for a matchup against Copiah Academy.

As was the case on Saturday in both games, the Cougars never trailed the Colonels.

Three runs in the bottom of the fourth ended up being the difference for the Cougars in the win.

And again, just as she did on Saturday, Covington shined in the circle to lead her team. Facing a Copiah squad that BA had played three times already in 2022, she scattered five hits, walked zero batters and gave up one earned run while striking out five players from Copiah.

Covington pounded the strike zone in the three wins over Bayou, ERA and Copiah as she walked zero batters in the three games combined.

Brookhaven sits at 23-8-1 on the season and has a young roster with just two seniors on the team in King and Reagan Newman. Head coach Lisa Covington says her team playing with confidence was huge on Saturday in its first two games.

“We faced a pitcher from East Rankin that was throwing it 65 mph and I think we were the only people in the whole ballpark that thought we could win,” said Covington. “Our girls believed we could win and weren’t really intimidated.”

The matchup against Oak Forest is one between two schools that know each other well. OFA and BA are members of the same district and played a home and home series in the regular season.

The schools played twice last week in the MAIS 5A South State Tournament. Oak Forest won those games 7-6 and 4-0.

“They’re a team that runs the bases well and bunts a lot,” said Covington. “We have to keep them off the base paths, hit the ball and play great defense.”

Oak Forest (25-9-1) went into the state tournament as a no. 1 seed but were beaten 11-0 by Simpson Academy in the first round on Saturday.

The Yellow Jackets bounced back to beat Magnolia Heights 11-1 on Saturday and then eliminated East Rankin with a 7-4 win.

Oak Forest got their revenge on Monday with an 11-10 win over Simpson and then punched their ticket to the championship series with a 3-2 victory over Copiah Academy.

“Our girls play a gritty style of ball,” said Covington. “They’ve worked hard to get this far, and I am extremely proud of them — I think they’re ready for the challenge of playing for a state title.”