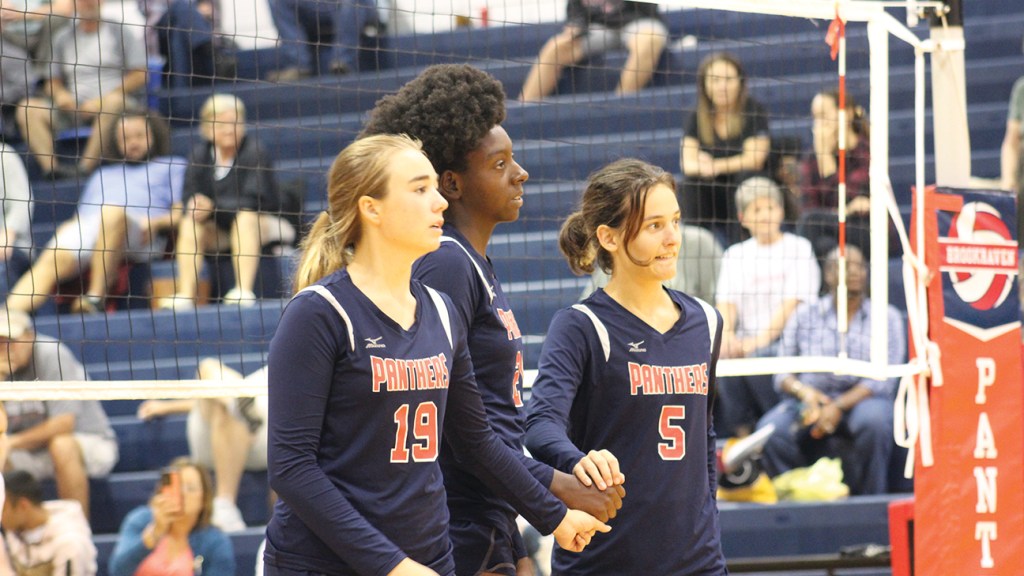 PHOTO BY CLIFF FURR The Brookhaven High trio (from right) of Olivia Smith, Olivia Vaughn and Leslie Williamson wait for a serve Monday against Lawrence County in Sinclair Gymnasium.

The volleyball regular season ended Monday for the homestanding Brookhaven High Panthers with a 3-0 defeat to the Lawrence County Cougars in Sinclair Gymnasium.

The game of volleyball might be still new to both schools — BHS is in year two of fielding a team and Lawrence County is in its fourth season — but each school has qualified for the postseason that begins later this week.

The win moved the Cougars and coach Sherri Ervin to 15-7 on the season. Lawrence County is unbeaten in region play and has one division match left on Thursday against Richland. LC won the first matchup between the schools 3-1 on Sept. 20 and is the only school in the region to beat Richland.

Besides Richland and LC, Region 6-4A is made up of Lanier High, McComb High, South Pike and Wingfield High.

The region champ will earn a first-round playoff bye, while the second and third place teams will play in the opening round.

Lawrence County won the first set 25-17 on Monday as the Cougars jumped out early behind the serving game of senior Lahna Stephens. The strength of Stephens serves also helped LC to an early lead in the second set as well.

A winner at the net by Brookhaven junior outside hitter Olivia Vaughn tied the first set at 9-9 and forced an LC timeout to regroup.

Momentum swung back in the favor of Lawrence County behind a strong serving set from 5-foot-9 junior Madison Mason.

The Cougars took the second set 25-19 as Brookhaven again kept LC close after going in an early hole, but never could pull ahead.

Those two along with Vaughn started for the Panthers along with senior Kaniya McDaniel, senior Leslie Williamson and junior Sierra Edwards.

Grey had said that last season would be about learning the game for the fledgling program. He predicted wins would come this year and that’s what’s happened for the Panthers in 2022.

The first varsity win in program history was a 3-0 win over Natchez High on Aug. 18. The team followed that up by beating Terry 3-0 a week after losing a match 3-1 to the same THS team.

Since then, the team also has another win over Natchez and a pair of victories against Region 6-5A foe Forest Hill.

Vicksburg won the region and Florence finished as runners-up. The third seeded BHS (5-13) team will play on the road Saturday in the first playoff match in program history at Vancleave High (8-9) at 6 p.m.

“I’m a competitor and Lord knows I’d love to be 13-5 instead of the other way around, but I can’t say enough about how hard the girls have worked in improving every day,” said Grey. “The next step of improvement is growing in our strategy and versatility. We’ll return seven of our top nine players next season and that’s something to be excited about.”

Coach Ervin of Lawrence County has seen the growth of the BHS team already this season between the first meeting of the schools on Aug. 29 and Monday.

“Both teams have improved so much this season and I’m thankful to have a close opponent like them that we can play every year,” said Ervin. “My girls have really grown in confidence and communication this season. I’ve got seven seniors and they’ve been our leaders and have been a fun group to coach.”