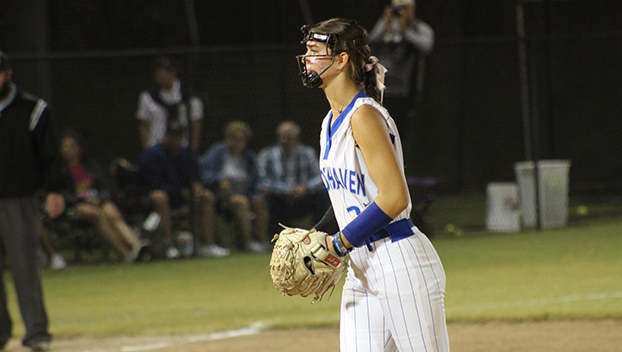 Brookhaven Academy sophomore pitcher Kensy Covington gave up just one earned run in six innings to help push her team past Oak Forest Academy 10-4 in game one of the MAIS 5A title series on Wednesday.(Photo by Cliff Furr)

An offensive burst that came in the middle three innings of the game powered Brookhaven Academy past Oak Forest Academy Wednesday in the opener of the MAIS 5A Softball State Championship Series.

BA scored four runs in the third and three each in the next two innings to gain a 10-4 win. Game two will be played at OFA tonight at 6:30 p.m. If a third game is needed, it’ll be played Saturday at Brookhaven.

Oak Forest struck first in the top of the third with two runs to go up 2-0.

Only one of those two runs was earned as OFA got going offensively via two errors and a triple.

After that, BA sophomore pitcher Kensy Covington didn’t give Oak Forest much to work with the rest of the night.

Covington struck out four, walked one and scattered seven hits in six innings. She threw 105 pitches in earning the win.

Freshman Miriam Wallace tied the game at 2-2 in the bottom of the third when she roped a double that scored Reagan Newman and Bailey Parks.

The lead for Brookhaven was further padded when Wallace scored on a double by Morgan Chemin and then Chemin came around to score on a single by senior Sasha King.

King and Newman are the only seniors on the roster, and they started at catcher and designated hitter respectively on Wednesday.

The starting infield for BA in game one was Chemin (freshman) at first base, sophomore Annaston Poole at second base, Parks (sophomore) at shortstop and sophomore Emme Barrett at third base.

Brookhaven Academy is looking to repeat as state champions after winning a three-game series in 2021 over Silliman Institute to give the school its first ever fastpitch state title.

This 2022 team isn’t that 2021 team though, as Covington, Parks, Wallace, Barrett, Daigle and eighth grader Madelynn Lambert are the holdovers from last year that saw the field in the title clinching win against Silliman.

This group of Cougars are young and have all had their share of big plays or crucial hits to get BA to 24-8-1 on the year.

“I just can’t say enough about how proud I am of this group of girls,” said BA head coach Lisa Covington. “They have worked all year, since this summer, to get better every day. You look up and down our lineup and we’ve had so many different people to step up and make plays for us this season.”

Kensy Covington has answered the bell as the staff ace all season and was pulled from the game by her head coach and mom ahead of the seventh inning on Monday.

Sophomore Maggie Rushing took over in the circle and got two quick outs before Oak Forest made the home fans start to squirm in their seats for a bit.

OFA added a run in the seventh, but Rushing was able to get a bases-loaded groundout to finish the game.

Brookhaven overcame three errors in the game by outhitting OFA 13-8 on the night.

Parks finished with three hits as the leadoff batter for BA. Wallace, Chemin and Poole all had two hits each.

Daigle put an exclamation point on the whole night by hitting a solo home run that provided the final Brookhaven run of the game.

Wallace and Daigle finished with two RBIs each. Chemin, King, Poole and Newman all had one RBI each.