Back to back — Brookhaven Academy softball MAIS 5A champs again 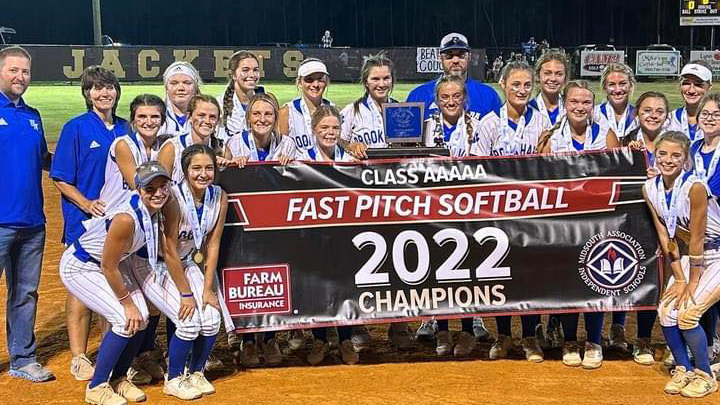 In sports, a “Cinderella Story” is when a plucky unknown overachieves.

Their journey is what your high school English teacher might have called a “Coming of Age” tale.

Thursday, the team stocked with young Cougars put their names in the annals of Brookhaven Academy lore with a dominated 11-1 win over Oak Forest Academy to give the school a second straight MAIS 5A state championship.

With only two seniors on the roster (Sasha King and Reagan Newman) and head coach Lisa Covington moving to that position after being an assistant coach last year for Becky Flowers — the Cougar came into the season with lots of questions to be answered about who’d replace the production of four all-state players lost to graduation.

It didn’t help that the late summer and early fall were extremely wet and just as the season was scheduled to begin, BA and other MAIS school battled some of the worst of the daily rainstorms that soaked the area.

The team was still coming together, still gelling when district play rolled around. They dropped a pair of division games to Columbia Academy and Oak Forest Academy, but still won District 4-5A on the last day of the regular season.

Next was the 5A South State Tournament, an affair that BA hosted at the Hansel King Sports Complex.

Most “Coming of Age” stories have a roadblock that tries to slow the protagonist down, before they bounce back to show how much they’ve grown from that adversity.

For the 2022 edition of Brookhaven Academy softball, that learning experience was the 5A South State Tournament.

The Cougars won three straight games in strong fashion before meeting up with Oak Forest in the championship game.

OFA needed to beat BA twice to win the title, while Covington’s Cougars could finish the tourney with a single win over the Yellow Jackets from Amite, Louisiana.

Oak Forest won a squeaker 7-6 in the opener and then took the tournament with a 4-0 win in a game that directly followed the first.

On paper, the MAIS 5A State Tournament looked to have a loaded field and started less than a week after the disappointment of 5A South State ended.

Bayou Academy, Simpson Academy, East Rankin Academy and Magnolia Heights represented the north side of the classification and all boasted records of 20-plus wins in the state tournament.

Someone must have forgotten to tell these Cougars that they were supposed to be underdogs.

They beat Bayou 4-2, East Rankin 3-1 and Copiah Academy 3-1 to put themselves into the championship series against Oak Forest.

The same Oak Forest team that held a 3-1 advantage over BA in the four meetings between the schools this season.

And Covington and her Cougars — a team that started more freshman than seniors — absolutely smoked Oak Forest.

BA took game one on Wednesday at home in front of a huge crowd by a 10-4 final.

On Thursday, they clinched the title by breaking open a close game with seven runs in the sixth inning.

The bats woke up in a big way on the biggest stage of the season.

BA also got an RBI each from freshman Morgan Chemin and junior Ainslee Jergins.

Sophomore pitcher Kensy Covington battled through some late season discomfort in her arm to gut out another winning appearance in the circle to finish off the title run.

Covington thew 86 pitches in seven innings. She struck out three, walked none and gave up one unearned run on eight hits.

Her head coach is her momma, and the name Lisa Rushing Covington is one that goes hand-in-hand with softball in this area.

Covington coached softball from 1994 until 2010 at Brookhaven High School.

She has won a lot of games as a head coach, none sweeter though than seeing her daughter get the final out on Thursday to beat Oak Forest.

As the team piled out of the dugout to mob Kensy Covington at the pitching rubber, their head coach was one of the first ones there on Thursday.

Looking at the way it all came together for this title and how many underclassmen will be coming back — this “Coming of Age” story might just be a chapter in an epic run for Brookhaven Academy softball.