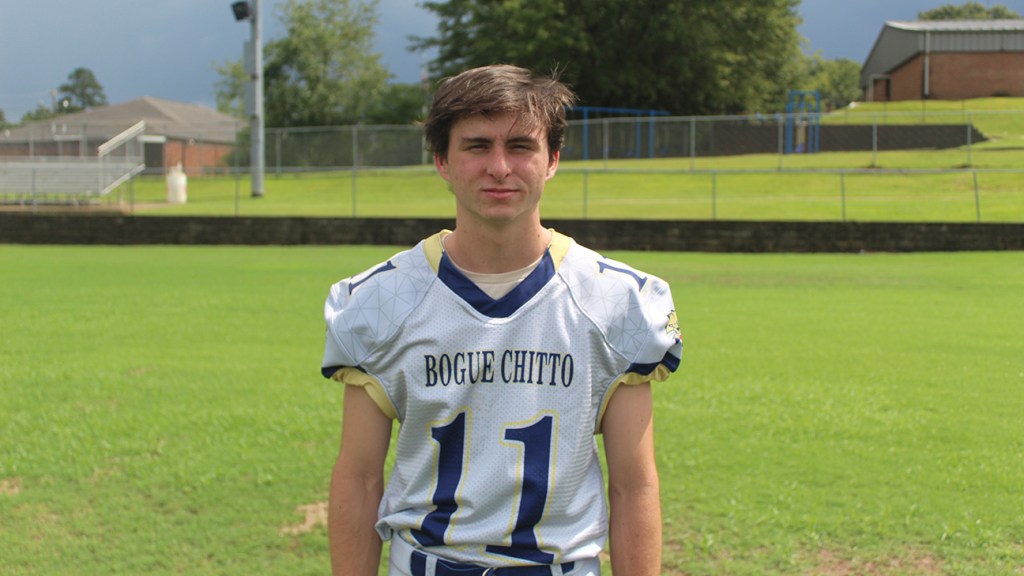 FILE PHOTO Bogue Chitto kicker Andrew Merrell booted a field goal as time expired to tie the game and then the winning PAT attempt in a 17-16 win over Loyd Star in overtime Friday night.

The 2022 Possum Bowl came within a whisker of going the way either team.

In the end, it was the Bogue Chitto Bobcats who took bragging rights and a Region 7-2A win by a 17-16 score in overtime Friday at Loyd Star.

Loyd Star (4-3, 0-2) got the ball first in overtime and scored on its second play when quarterback Nathan Mills ran around the left end for a six-yard touchdown.

It took just one play for Bogue Chitto (6-1, 2-0) to answer when big sophomore running back Isaiah Collins rumbled in from the 10-yard line.

After a Loyd Star timeout, BC junior kicker Andrew Merrell booted the point-after attempt through the eastern goal post to set off a Bobcat celebration on W.E. “Sambo” Smith Field.

Loyd Star won last years Possum Bowl matchup in a 26-24 game that went back and forth.

The Bobcats won 27-20 in overtime in 2020 over their Lincoln County rivals.

Bogue Chitto got on the board in the first quarter when quarterback Colton Frith hit senior receiver Cameron Williams for a 21-yard touchdown pass.

Frith was running to his left and was able to squarer his shoulders with the line and flick a side-armed pass towards Williams.

Williams did the rest as he cut back across the grain to outrun the Hornet defense.

The score remained 7-0 until three minutes before halftime.

That’s when Loyd Star senior running back Bryce Ford powered in from the 4-yard line. Cooper Reid booted the PAT kick to tie things up at 7-7.

The Loyd Star rushing triumvirate of James Goodwin, Julius Smith and Ford helped the Hornets control the clock in the second quarter and keep the ball away from the Bobcat offense.

Following the tying score, BC went for it on a 4th-and-short and had the ball turned over on downs when Smith shot through as a defensive lineman to make a tackle for a loss.

Loyd Star took advantage by getting a 22-yard field goal from Reid that made the score 10-7 at halftime.

Neither team could create separation in the second half as cramps to some of the key Bobcats and Hornets had players slow to get up on nearly every play.

BC missed a tying field goal in the second half and Loyd Star had a long touchdown run by Ford called back in the fourth quarter by a holding penalty.

BC got the ball back with 4:31 left in the game and trailing by three points. They drove 77 yards to get a chip shot 22-yard field goal from Merrell on the final play of the game to send things to overtime.

It’s a second straight region loss for Loyd Star after a 51-39 setback last week at East Marion. The Hornets will step out of division play next week when they host the St. Andrew’s Episcopal Saints (5-2).

Bogue Chitto and coach Gareth Sartin are back on Troy Smith Field Friday to host the East Marion Eagles (3-4, 2-0) in a game that will decide first place in Region 7-2A.

East Marion beat Amite County 56-14 in their matchup this week.