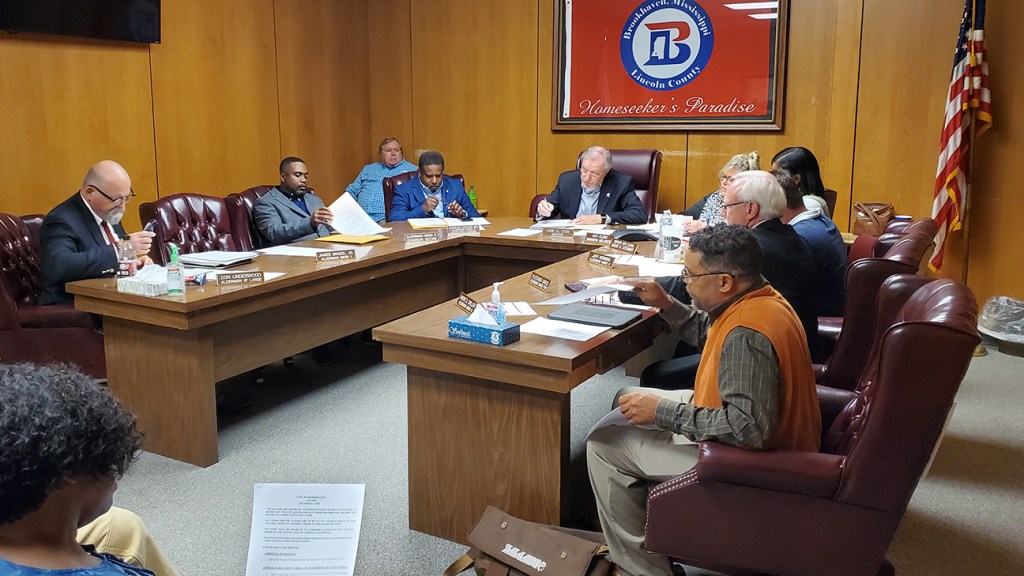 PHOTO BY BRETT CAMPBELL The Brookhaven Board of Aldermen discusses agenda items during its most recent meeting.

The moratorium on new portable buildings in the Brookhaven city limits has been extended.

The pause on allowing the structures to be added was enacted July 5, 2022, by the Board of Aldermen in order to review proposed changes to Ordinance 208, adding portable buildings to the existing law on manufactured buildings in commercial districts.

“You can extend the portable building moratorium; do nothing — which would go back to the old ordinance; or exclude using them as offices,” City Inspector David Fearn told the board Tuesday.

Alderman-at-large Don Underwood proposed extending the moratorium “until we can do better” by figuring out a good solution. The board agreed unanimously.

Manufactured buildings are currently prohibited in the Central Business District (C-2) and are allowed only under special provision in C-1 and C-3 zoned areas.

A manufactured building is defined in the ordinance as “a structure built in a factory on a non-removable steel frame designed to be used with or without a foundation and is capable of being drawn by a motor vehicle on its own wheels.”

If the ordinance passes the board as proposed, the definition of portable building will be included as “a structure built in a factory and transported to the building site on truck beds and permanently affixed to a permanent brick or concrete block chain wall foundation.”

The proposed ordinance also adds portable buildings to restrictions on manufactured buildings, specifically that they are prohibited in the C-2 Central Business District, and cannot be located permanently on any existing parking lot or paved area, or placed closer to the right-of-way than the majority of existing structures in the vicinity.

• Approved increase in salary for Heath Haas Jr. in the Fire Department from $28,646.50 to $34,562.14 for becoming a Certified Firefighter, by graduating State Fire Academy.

• Approved the termination of Derek Bethley from the Police Department, for cause, effective Sept. 21, 2022.

• Approved accepting the resignation of Nicholas Blue from the Street Department, effective Sept. 20, 2022.

• Approved to remove a 2017 Ford Explorer from unmarked status in BPD inventory.