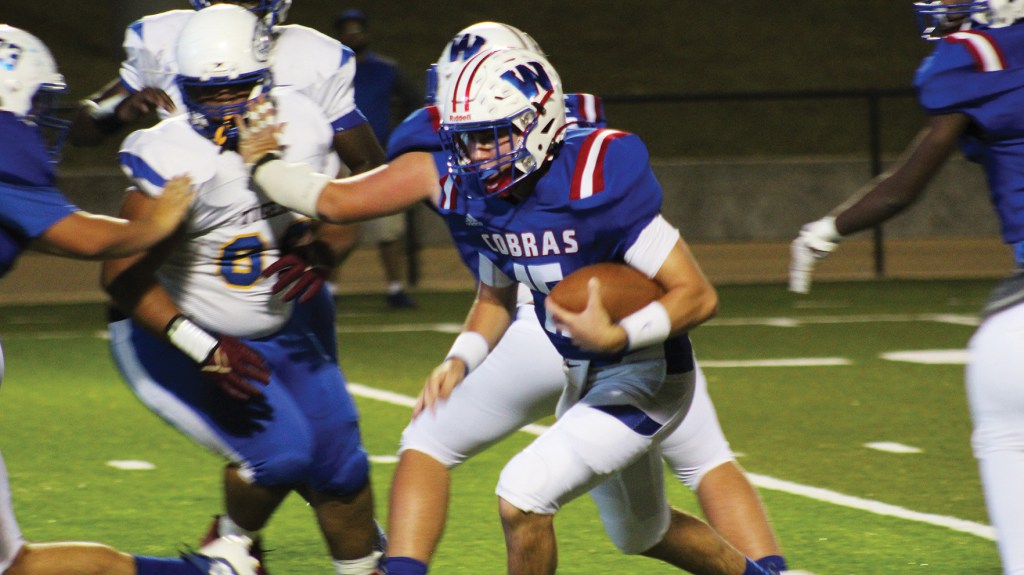 PHOTO BY CLIFF FURR Wesson senior quarterback Will Loy runs for one of his two first half rushing scores Friday against Crystal Springs.

The Wesson Cobras were executing their game plan beautifully Friday night against their Copiah County rivals from Crystal Springs, but an ugly scene stopped the game with two minutes remaining in the third quarter.

A fight involving multiple players swinging off on each other — one using a helmet —took place in front of the Wesson bench after the whistle.

After a midfield meeting involving principals and coaches, the officiating crew called the rest of the game off.

Wesson senior quarterback Will Loy threw his 100th career touchdown last week in a loss at Raleigh. Loy got Wesson on the board in the first half with two rushing touchdowns as his team led 21-7 at the halftime break.

Cotton Westbrook also scored a rushing touchdown in the first half and the Wesson lead was further padded when O’Mari Johnson ran in for another score in the third quarter.

That last touchdown was set up by a leaping interception from sophomore Deshawn Smith.

The Cobras (4-4, 1-2) may be without some of their players due to the fight when they host Magee High (4-4, 1-2) in another Region 6-3A tilt. Magee also dealt with drama on Friday when a threat of gun violence ended their matchup with Raleigh prematurely in the fourth quarter.

The air attack was clicking for Brookhaven Academy Friday in the regular season finale as the Cougars (7-2) were too much for visiting Centreville Academy (3-6) to handle.

Helton hooked up with senior Rayce Stewart on four passes for 60 yards and one touchdown. Fullback Jaden Lea had his one catch of the game go for 11-yards and a score too.

The regular season wraps up on the road next week as the Cougars look to finish up District 4-4A play by facing the Wayne Academy Jaguars (3-4) in Waynesboro.

It was a fulfilling homecoming night at Loyd Star (5-3) as the Hornets rudely romped over their visitors from Madison County, the St. Andrew’s Episcopal Saints (5-3).

The game was a non-division affair as the schools played a home and home series last season — one they split with the visiting team losing each time.

St. Andrew’s has played the last two seasons as an MHSAA independent, meaning they can schedule whoever they want. The Saints had a four-game winning streak broken that included a 35-14 victory last week over West Lincoln.

It was a nice rebound win for LS and coach Brian Ford after the Hornets dropped a heartbreaker 17-16 in overtime to Bogue Chitto last week.

Coach Trey Woodard and this Enterprise Jackets picked up their first win of 2022 with a hard-fought victory over Salem in Walthall County on Friday.

The offensive attack presented by East Marion has put up points this season in division play as they hung 56 points on Amite County last week and outran Loyd Star by a 51-39 final.

All that’s left for EMHS the rest of the way is a non-division game against Sacred Heart next week and the regular season finale at West Lincoln on Oct. 27.

Bogue Chitto can clinch the second seed in the division and a home playoff game with a win next week at Amite County. The Bobcats wrap the season up on Oct. 27 with a non-region game against Franklin County at home.

The win was the first at Amite County for first year head coach Michael Dogan. West Lincoln will keep it in the county next week when they travel to Loyd Star.

The Hattiesburg High Tigers (4-4, 4-0) stayed perfect in Region 3-5A by protecting their home turf Friday against visiting Brookhaven High (0-6, 0-4).

Last week HHS held off an improved Florence squad for a 28-21 division win. Florence is the next region foe for BHS as they’ll host Ole Brook next week.

Florence (5-3, 1-3) has dropped three region games in a row — including a 34-7 loss to West Jones on Friday — after beating Laurel High 28-27 in their first division game of the season.

The Sumrall Bobcats (6-2, 2-1) came roaring back with four unanswered touchdowns in the second half to beat Lawrence County (6-2, 1-2) Friday in Monticello.

The homestanding Cougars led 12-0 at halftime and led by that margin until late in the third quarter when Sumrall returned a fumble for a score. The Bobcats then owned the final quarter of action to hand LC a second straight Region 4-4A loss.

The Cougars and coach Jesse Anderson will be on the road next week playing at Purvis (4-4, 0-3).