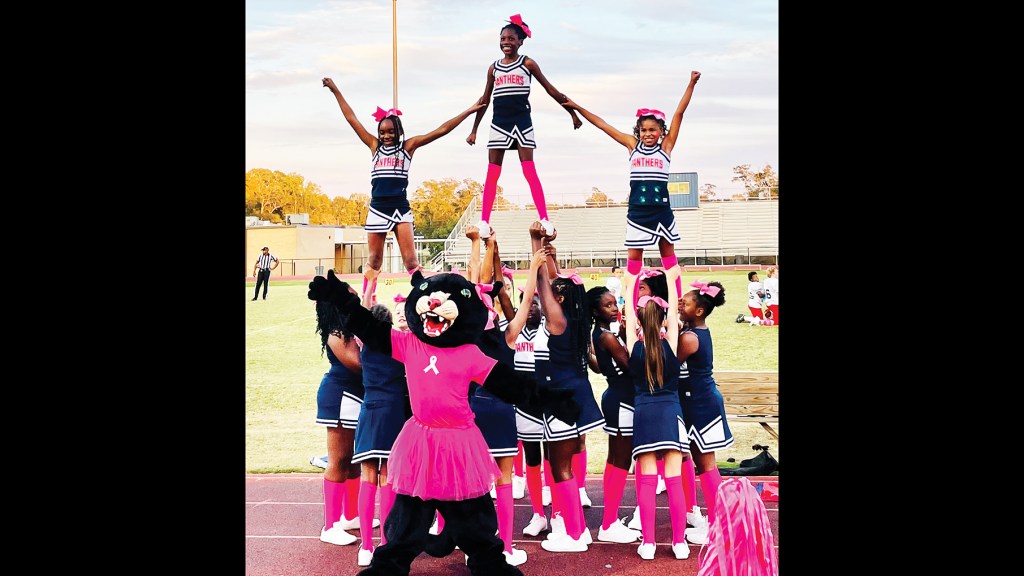 PHOTO BY KATIE FURR The Lipsey Middle School cheer team has put on a show every Tuesday night as they’ve supported the four pee-wee football teams fielded from the school.

It doesn’t matter who wins the Tuesday night Lispey Bowl between the Gray Team and the White Team when the 5th and 6th grade season wraps up with a final game played on King Field.

Be they the winner or be they the loser — both teams will get an equally enthusiastic level of support from the 2022 Lipsey cheer squad.

Larry Brown of Brookhaven volunteers as head coach for the program and has done so for five seasons now.

The 2022 group is the first time that a tryout was held to select the cheer team. In the past, anyone who signed up would make the team and the cheer coaches would have a squad of 40-50 girls to work with.

In May, the coaches held a cheer tryout clinic and selected 20 girls as cheerleaders, with one picked to work as the mascot — Penny the Panther.

The team has piled up the practice hours as they worked out together for two hours a day, three days a week, in preparation for the season.

During the five-week regular season, they’d cheer for both teams during the Tuesday night Lipsey football doubleheaders.

The work didn’t just start when the school year began though, Brown says his group went through a five-day cheer camp and showcase that was led by West Lincoln cheer coach Dedra Edwards this summer.

That camp gave the girls a chance to cheer alongside the BHS cheer team, which is coached by Stevie Ann Wright.

“We run a volunteer-based program that’s giving students at Lipsey Middle School the chance to begin their career in cheer,” said Brown. “Over the years, I’ve watched the potential change so much in students, with many of them coming to us with strong skills already. That gave us the vision to upgrade the standards for our cheerleaders this year and we’ve tried our best to give our girls a total cheer experience.”

Part of that total experience was a Spirit Week put on by the cheer squad this week in anticipation of the Lipsey Bowl on Tuesday night.