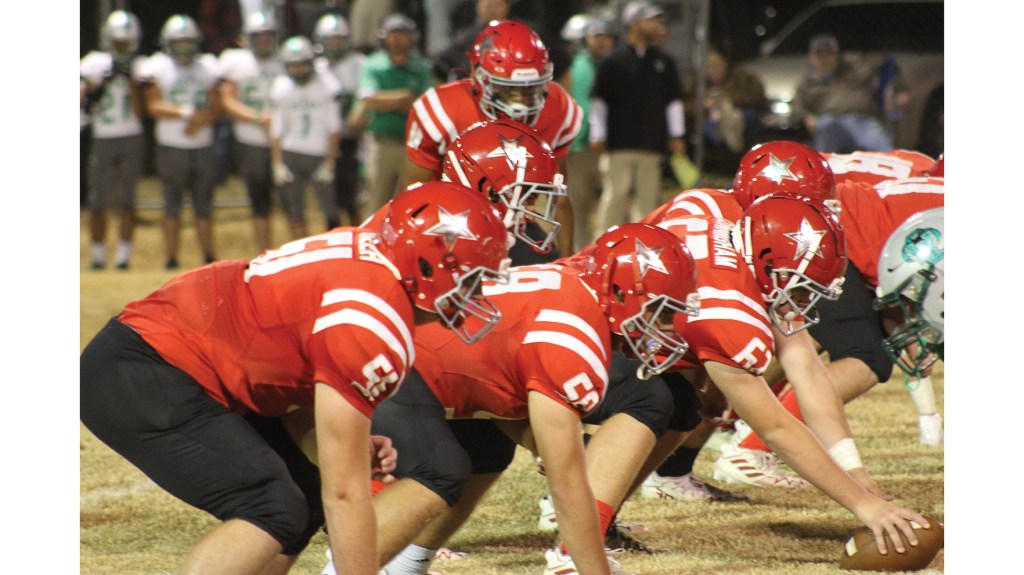 PHOTO BY CLIFF FURR Loyd Star was strong at the line of scrimmage Friday in a 54-0 win over visiting West Lincoln. Both teams will play on the upcoming Thursday to end the 2022 regular season.

It took just two plays for the Hornet’s band to strike up the fight song after a long gain by senior running back Bryce Ford got Loyd Star deep into the redzone and then senior wingback Julius Smith ran the remaining 11-yards on the next play for a score.

A minute hadn’t run off the clock yet and the Hornets already led 7-0 in what would be an eventual 54-0 win for Loyd Star.

It was a similar formula that put Loyd Star up 14-0 after a Cooper Reid PAT kick on its second possession of the game.

Again, Ford ran for a long gain and was followed up by a rushing score from Smith.

Ford got in on the scoring later in the quarter as Loyd Star led 21-0 after the first 12 minutes of the game.

Taking the ball around the right end of the line, Ford followed the blocks of left guard Trevor Smith on his first touchdown run.

Smith pulled around on a sweep and ran just ahead of Ford like a fullback, as his senior classmate had a hand in his back to guide his lineman towards a defender.

The much bigger, older and stronger Smith grabbed up a potential West Lincoln tackler and carried him down the field for a bruising block that sprung Ford towards the endzone.

West Lincoln (0-9, 0-4) and coach Brad Bland have dealt with injuries to some of the key skill positions this season.

Freshman Braden Hamm was one of several young starters that rarely left the field Friday for West Lincoln. Hamm was part of the rushing attack for the Bears along with seniors Kallion Stewart and Tyrell Fairman.

Senior Josh Thornhill has been pressed into service as the quarterback, while also playing defensive back and working as the punter and kicker for West Lincoln.

Ford ran for a nice 69-yard touchdown scoring play in the second quarter and the Hornets then recovered the ensuing kickoff.

Reid booted a kickoff that went high and short and when West Lincoln failed to cover it, the LS return team pounced on the ball.

Smith later scored his third rushing touchdown of the half following the turnover.

The final Loyd Star touchdown of the first half was a 24-yard touchdown pass from junior Nathan Mills to senior Cortez Smith to make the game 41-0 at the break.

“We broke a couple long ones in the first quarter and that allowed us to get up early and play a lot of our young guys after halftime,” said Loyd Star coach Brian Ford.

The Hornets and Bears both play Thursday night games in the regular season finale this week. West Lincoln will host East Marion (5-4, 3-0) while Loyd Star is on the road for its game at Amite County (1-6, 1-2).

Brookhaven Academy has won MAIS District 4-4A for a second straight year after with a big 35-14 victory at Wayne Academy (3-5) in Waynesboro on Friday.

With the district title comes a first round-bye next week when the MAIS 4A playoffs begin. Last season the Cougars were put out of the postseason with a close 45-38 overtime loss at home to Kirk Academy in the second round.

Coach Anthony Hart and his BA squad cruised to a 28-0 halftime lead behind four first half rushing touchdowns from senior quarterback Elijah Helton.

The Cougars will next await the release of the MAIS 4A brackets to find out their potential opponents for a home playoff game on R.M. “Red” Stuart Field on Nov. 14.

Brookhaven led 14-11 in the fourth quarter before Florence got momentum rolling.

Turnovers hurt the Panthers as did a blocked punt in the fourth quarter that gave Florence a short field to get its final insurance touchdown of the night.

Ole Brook outgained the Eagles 247-160 in total yards of offense. Junior running back Xavier Gayten was spectacular for Brookhaven High. Gayten accounted for 194 yards rushing and caught three passes for another 42 yards through the air for coach Tucker Peavey.

Brookhaven High returns to King Field next week for a 2022 Homecoming Matchup with Natchez High (3-6).

Coach Gareth Sartin and the Bobcats will finish up the regular season with a Thursday night game at home on Troy Smith Field against the visiting 3A Franklin County Bulldogs (4-4).

The visiting Lumberton Panthers (4-5, 4-1) will stay towards the top of the table in the Region 4-1A standings after beating host Enterprise (1-7 1-4) Friday on Harry Cole Field.

Bay Springs and Taylorsville are the top two teams in the division, and they’ll meet to hash out first place in less than a week.

Lumberton is the likely three seed from the region though as they have games remaining against Salem and Bay Springs.

Enterprise coach Trey Woodard and his team will make the long trip to Pascagoula to face Resurrection Catholic on Friday, before closing the 2022 season with a home date against Mount Olive on Thursday, Nov. 3.

Coach Jeremy Loy’s Wesson team cut the Magee lead to 13-6 in the third quarter before Magee (5-3, 3-3) began to pull away. The Trojans are coached by Chuck Maxie, who was a defensive assistant last season for Loy at Wesson.

There was at least a two-score lead for much of the night Friday for the Lawrence County Cougars (7-2, 2-2) in Purvis.

Coach Jesse Anderson’s team have a Thursday night game against a tough group of Columbia High (7-2, 3-1) Wildcats at 7 p.m. in Monticello.

On Friday, Purvis High (4-5, 0-4) couldn’t do much to slow down the LC offense as junior quarterback Kannon Cato rushed for two scores and threw for two more touchdowns in the win.