Odds and ends of note from our local sporting scene 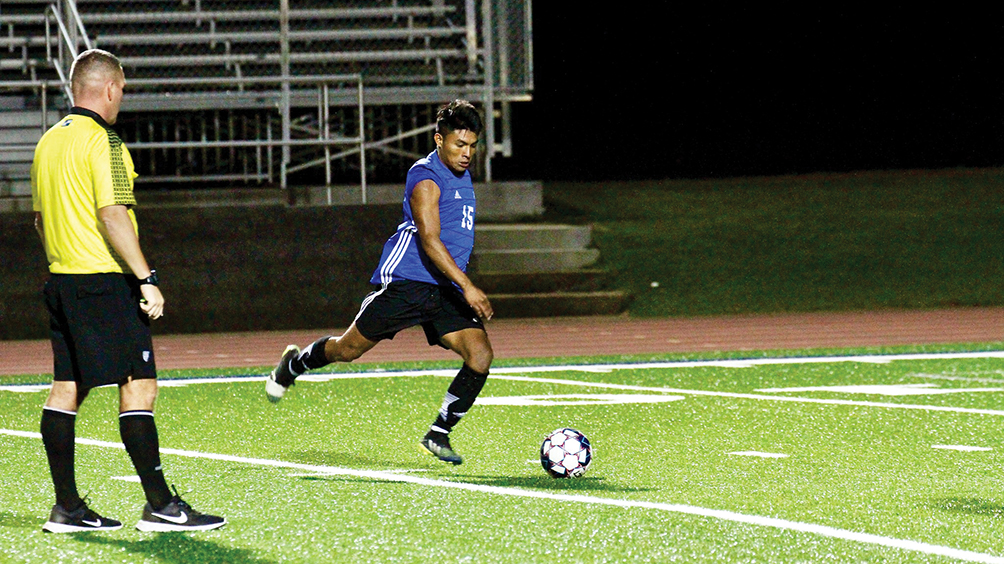 Photo by Co-Lin Sports Info The Copiah-Lincoln soccer team is having the best season in school history as both the men’s and women’s teams sit near the top of the MACCC standings at the end of the regular season.

Cleaning out my notebook of some odds and ends while pondering how quickly the calendar has flown through football season to the cusp of bouncing basketballs being the spotlighted sport.

It won’t go into the record books as a win, but Copiah-Lincoln CC had the greatest draw in soccer program history last week when they tied Jones College 1-1 in the women’s match between the schools.

The match and results show just how much CLCC soccer as a whole has grown under the leadership of third year head coach Tom Cosgrave.

Jones had won 22 straight matches over Co-Lin and boy were there some blowouts during that streak.

Cosgrave and his assistant coach Patrick Ross lead both CLCC soccer teams and have both squads near the top of the table as the MACCC regular season came to a close with matches against Meridian on Tuesday.

The postseason, something Co-Lin soccer has little experience with, will soon begin and the Wolves will be a tough draw for whoever they face.

Cosgrave is a native of England that came to the United States for soccer and who is now similarly giving young players from across the pond the same opportunities that he gained by playing at Belhaven University in Jackson.

A member of the 2012 NAIA National Championship team at Belhaven, Cosgrave and his teammates from that season were recently enshrined in the school’s athletics hall of fame.

A couple of the Co-Lin Brits had the biggest impact on the women’s match against Jones.

Sophomore Anacia Leyland of St. Helens, England scored on a penalty kick that put CLCC up 1-0 in the first half.

Sophomore goalkeeper Alex Moon, she of the properly British named Poynton with Worth, England — stopped 12 shots on goal in 110 minutes of action in net.

Freshman Charlie Cooper of Corby, England leads the team with 12 goals on the season.

A 3-1 loss to Jones was the first time for the Co-Lin men to lose to a MACCC team this season.

The Co-Lin men have been similarly buoyed by British-based goal keeping in 2022.

Leo Summers, a 6-foot-4, 185-pound freshman from Cornwall, England, has been named MACCC keeper of the week once this season for the Co-Lin men.

Sophomore Hardy Lewis — he of the Brandon … not Britain — leads the Co-Lin men’s team with 13 goals thus far in 2022.

Earlier this week both CLCC teams finished with a draw against Pearl River CC on the road in Poplarville with the men’s squad finishing in a 1-1 tie.

The Co-Lin women finished 0-0 with PRCC after two overtimes as Moon was a stone wall for her team in goal, stopping 27 shots in 110 minutes of play.

Those results and her play against Jones earned Moon MACCC keeper of the week honors.

Earlier this month the 2022 Co-Lin Sports Hall of Fame class was honored by the school.

Chris Caughman (basketball) of Mendenhall, Latoria Holder of Pensacola, Florida (basketball) Matthew Mooney (golf) of Phoenix, Arizona, Chandler Rogers (football) of Virginia Beach, Virginia and the late Tim Johnson (tennis) of Monticello were enshrined together as the Class of 2022.

If you’re of the age of this author and grew up in area then you’ll likely agree with this estimation — Matt Mooney is the greatest home-schooled athlete in Brookhaven history.

Mooney laughed when I relayed my assessment to him during the first half of the homecoming game in Wesson.

“You might be right,” he said, “I’m not sure who I’d be competing against for that.”

Mooney is the oldest of Dr. Spencer and Janie Mooney’s seven children.

My first memories of Matthew Mooney were when he and Justin Ratcliff helped carry our Cracker Barrel Store branded B-Minor team to the Dixie Youth City Tournament Championship.

Matt was already a great athlete even as an elementary student. He’d pitch and catch and come up with big hits when we needed it.

I’d rotate starts in right field with a couple other kids — one who meowed like a cat — under the wise tutelage of our coaches Don Underwood and the late Carl Craig Sr.

Mooney was the type of kid that other kids looked up to like he was a shrunken adult.

He played golf at Co-Lin and then Mississippi State. He and his wife, the former Anna Gatlin of Brookhaven, live in Phoenix area as Matt is a senior vice president at Parkway Properties.

Those leadership qualities that it felt like Mooney was born with, you get the same sense of poise from Rogers, who starred as a quarterback at Brookhaven Academy before coming to Co-Lin.

Rogers is currently in the U.S. Navy and serves in special forces.

He credits athletics — specifically his time spent at Co-Lin — as a precursor to his time in the military.

Rogers gone through some intense training in his military career, but you aren’t going to hear any type of bragging or boasting from the humble Rogers.

I’ll brag for him instead.

When he was leading BA to a state title as a junior, Rogers could sit back in a clean pocket and wait for a streaking receiver to get open downfield. If they were covered, he’d tuck the ball and run for a first down more often than not.

A two-year starter at quarterback for CLCC, Rogers had to use his first-year season as an adjustment to the much faster speed of JUCO football.

That group played a bunch of freshmen and fought its way to a 5-4 record with a win in the season finale.

The next year, that same group grew into one of the most memorable teams in CLCC football history by winning the 2012 MACCC state championship.

The title was clinched on a sun-kissed Saturday afternoon in Perkinston with a 41-37 win over Mississippi Gulf Coast.

The go-ahead score for the Wolves came when Broohaven High product Stone Underwood snapped the ball to BA product Rogers — who faked a handoff and then a screen pass — before throwing the ball to a wide-open Marquis Hayes.

Hayes, a Loyd Star alum, could almost walk into the endzone as the play design was near perfect.

Another Brookhaven High product, Greg Sims, then sealed the win with an interception on the final Gulf Coast drive of the game.

That 2012 team put the community in community college in a way that we’ll probably never see again.

Condolences to the family of Laurie Goetz

My most sincere and heartfelt condolences go out to the family of former long-time Daily Leader Sports Editor Tom Goetz on the loss earlier this month of his wife Laurie.

If you grew up reading every word that Tom wrote like I did, then you felt like Miss Laurie was someone you knew all your life.

That was often my favorite part of reading the weekly column turned in by Tom every Thursday.

The main draw of his column for many was Tom predicting the scores of the upcoming Friday night high school football games, but I always greatly enjoyed when he gave glimpses into the life that he and Laurie shared in the Hurricane Lake community.

Tom would lightly gripe about building new fence rows in the heat or talk about tending to animals over the years.

When he wrote about his wife though, it was always with reverence and love that jumped off the page.

They displayed that same type of love when you’d see them out and about around town.

When I think about Tom and Laurie, I picture them as you’d often see them sharing a meal together on his lunch break.

Their feelings for each other apparent to even a teenager like myself as they grabbed a burger from Wendy’s before Tom went out to cover another game that night.

They were each other’s best friend — you could see that if you’d never read a word that Tom wrote.

Cliff Furr is the sports editor at The Daily Leader. He can be reached by email at sports@dailyleader.com