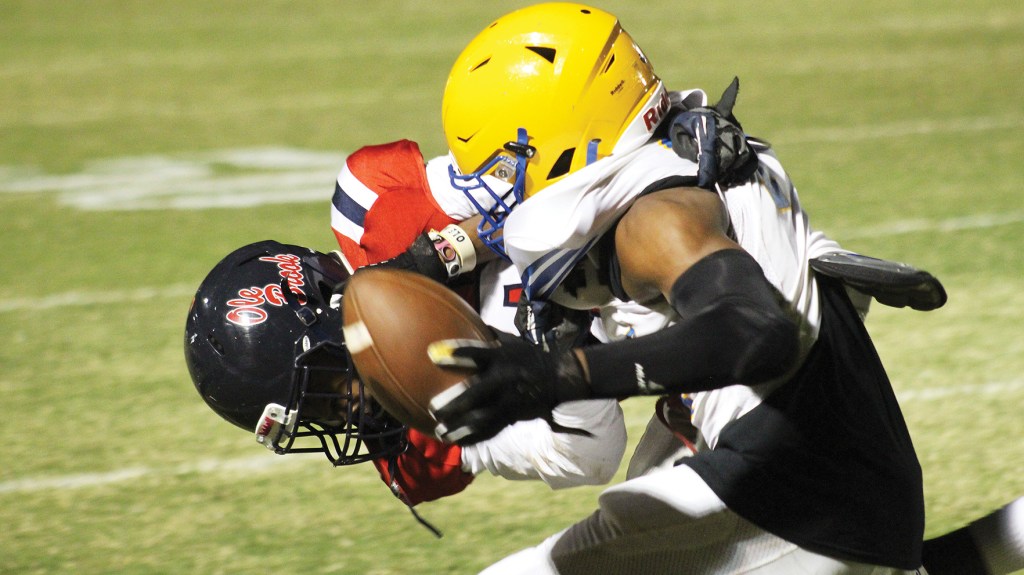 PHOTO BY CLIFF FURR Natchez High senior receiver Damarcco Blanton fights off a Brookhaven High defender while making a catch Friday in the first half.

Early in the first half, Natchez High (4-6, 2-4) sophomore quarterback Kaden Walton would drop back and heave bombs down the field, but the signal caller rarely had a receiver in the area.

Once NHS fixed that issue, they used deep passes off the arm of Walton to a cadre of receivers and sprung big play after big play in a 48-34 win over Brookhaven High (0-8, 0-6).

First year Natchez High head coach Steve Davis is a 1990 NHS alum. He’s coached previously at his alma mater as an assistant and was an assistant at Franklin County before getting the head job at NHS in the spring.

Davis said he’d never been part of a win over Brookhaven High until Friday night.

“This is the first time for me to beat Brookhaven — as a player or a coach,” said Davis. “I knew when I took the job, we’d have talent in the skill positions. It’s just been a case of our guys continuing to gel as the season has gone along.”

The game was a track meet in the early going as Brookhaven High went up 14-0 in the first quarter behind two long runs from junior running back Xavier Gayten.

Gayten got the scoring started with an 85-yard touchdown run on the first BHS drive and then added a 61-yard run for a score later in the opening 12 minutes of play.

2022 BHS Homecoming Queen Leah Wilcher had just been crowned, King Field was packed and it looked like Ole Brook was on its way to the first win of the season.

The back end of the second quarter is when Natchez started to hum offensively.

Walton hit senior wideout Demarrco Blanton on a 10-yard touchdown pass and then found Caron Williams for the 2-point conversion to make the score 14-8.

On the next drive, a quick slant to Natchez receiver Mike Williams covered 46 yards and had the Bulldogs tied at 14-14 with 4:43 left until halftime.

The BHS offensive line and the Panther offense responded though as Gayten ripped off another monster run, this one for 65-yards and a score.

And again, the Bulldogs answered with a 25-yard pass to Williams from Walton. A converted 2-point conversion made the score 22-20 in favor of Natchez with 1:06 left until halftime.

That’s where things went from bad to worse for the Panthers as the first play of the ensuing drive ended in a 25-yard strip and score by Natchez defender Jakel Irving.

The 6-foot-3 Irving and 6-foot-4 junior Charles Brooks are just two of the rangy, athletic weapons that the Natchez coaching staff has to use on both sides of the ball along with the speedy Williams and a big, physical running back in senior Tray Minor.

That defensive score put Natchez ahead 30-20 at halftime and Brookhaven High would trim that deficit, but never overcome it in the second half.

Williams caught a 59-yard missile of a scoring play that hit him in stride behind the BHS defensive backline to put NHS ahead 36-20 in the third quarter.

The duo of Walton and Williams then topped that with a dime that the quarterback tossed high and the falling receiver cradled in the back of the north endzone to put NHS up 42-20 with 100 seconds left in the third quarter.

The chances of a BHS comeback took a hit late when Gayten went out with an injury in the fourth quarter. The junior ball carrier finished the game with an unofficial total of 373 yards on the ground.

After the postgame handshake line at midfield, nearly every player in a Natchez uniform went to the BHS sideline to acknowledge Gayten as he stood on crutches with an icepack on his foot.

Coach Tucker Peavey’s Panthers kept chipping away though and had a chance to tie the game in the fourth quarter.

A 1-yard rushing touchdown by sophomore quarterback Dreamus Harron made the score 42-28 with 9:34 left in the game.

The Ole Brook defense stiffened and held Natchez to a turnover on downs at midfield. BHS responded with 13-yard touchdown run by Dashawn Wilson to make the game 42-34 with 5:10 remaining.

Again, the BHS defense did its job and gave the ball back to the offense with 3:29 remaining in the game and the Panthers 69 yards away from a tying touchdown and 2-point conversion.

It would be Blanton, the same strong senior receiver that began the NHS in the first half, who made the defensive play of the night to ice things for the Bulldogs.

Blanton broke on a pass as a safety and returned the interception deep into BHS territory. From there, Minor put it away with another short touchdown run.

“We were trying to throw it and just had a bad ball and that put an end to it,” said Peavey in the postgame. “We had a few mistakes in the first half offensively that we gave them a touchdown on that turnover. We knew their skill players were very good. They threw the ball like crazy tonight.”

Natchez looks to end the season on a 3-game win streak when the 2022 campaign wraps up next week at Florence High on Thursday, Oct. 3.

BHS will be back on King Field, also on Thursday, for a 7 p.m. kickoff against South Jones in the season finale.