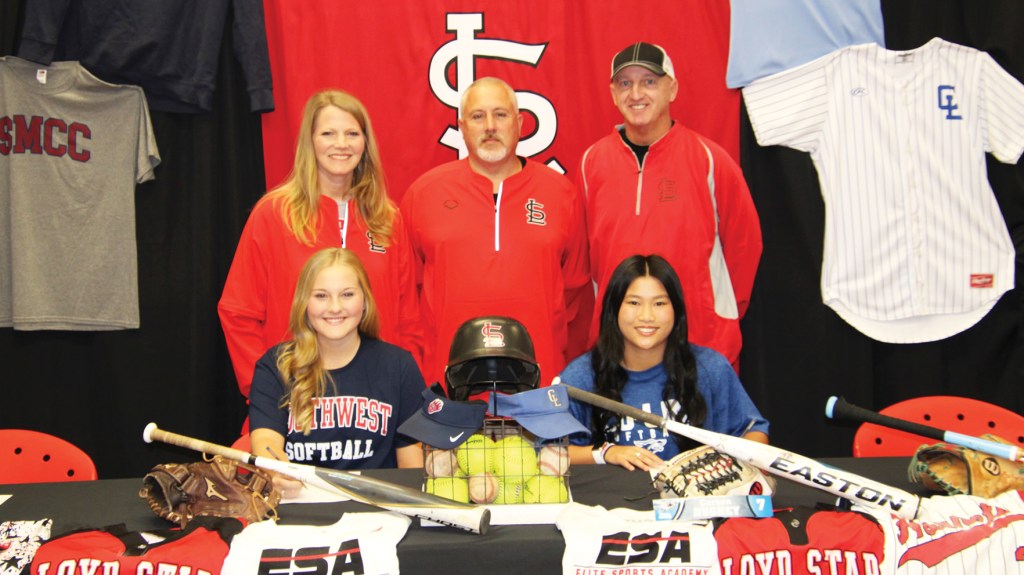 The Loyd Star duo of seniors Carson Hughey and Alyssa Leggett have been varsity starters and key contributors since they joined the team in junior high.

Last week in a ceremony attended by family and friends, the duo made sure their softball careers will continue after they graduate.

Hughey, a left-handed outfielder, signed a scholarship with Copiah-Lincoln Community College. Leggett, a hard-hitting catcher, inked her letter-of-intent to play next for the Southwest Mississippi Community College Bears.

Loyd Star is coached by Alyssa’s parents, Scott and Denise Leggett. The softball team at the school is more like a big family as Scott and Denise have had the once in a lifetime opportunity to coach their daughter and some of her best friends as they’ve moved through the program.

“They’re both outstanding young ladies,” said Scott Leggett. “They’ve had fantastic high school careers here at Loyd Star. They have played a huge role in our success over the years.”

The 5-foot-3 Hughey pitched earlier in her career before moving to the outfield last season. As a leadoff batter, it was nearly impossible for the opposing pitchers to keep her off the basepaths.

Last season, Hughey had a team high 40 hits for a 22-7 Loyd Star team. As a centerfielder, she drove in 26 runs, hit seven doubles and two triples last season to earn Daily Leader All-Area honors for a third straight season.

In Wesson, she’ll play for a Co-Lin program that’s coming off a 2022 MACCC state championship.

Like Hughey, Leggett is a multi-sport athlete that also plays basketball for Loyd Star.

A 5-foot-9, catcher who can call pitches like a coach on the field, she hit a team best .462 at the plate last season for the Hornets. Leggett also led Loyd Star in her junior season with a team best 40 runs batted in. Last season she smacked 11 doubles, two home runs and has been named an All-Area selection in both softball and basketball during her career.

Southwest is coming off a 25-16 season under coach Shea Johnson.

“This is always a bittersweet time for coaches,” said Scott Leggett. “We hate to see them go, but we’re extremely proud and excited for their next opportunity. Both of these girls have put in a lot of time and dedication to play college basketball and I know they’ll continue that dedication at Co-Lin and Southwest.”