Panthers send seniors out with win over South Jones 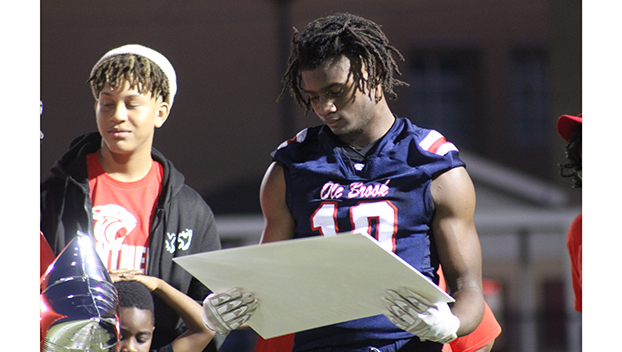 Brookhaven High linebacker Malachi Williams looks down at a picture featuring his mother Mashonna Dunnigan during the senior recognition ceremony on Thursday night before BHS took on South Jones. (Photo by Cliff Furr | The Daily Leader)

Thursday night, the 13-man senior class of Brookhaven High football spread out across King Field in a pre-game ceremony.

Each player was surrounded by family and close friends as they received a flower, handshake and hug from BHS head coach Tucker Peavey.

The team was about 30 minutes away from the regular season finale, a game won 52-14 by Ole Brook over the visiting South Jones Braves.

Senior recognition ceremonies are usually filled with some emotion, especially when they fall on the final game of the season.

And that’s what Thursday was for the Panthers, the finale of a season that had them coming into the game with an 0-8 record.

When it came time to recognize linebacker Malachi Williams, the senior team leader released a white balloon that floated slowly at first towards the home bleachers of King Field.

Then, a gust of wind caught the balloon, and it sailed out of sight into the darkening night sky. Williams looked up and smiled as it traveled quickly towards the heavens.

In a season of defeats, Williams and his younger brother and teammate Marreo Williams experienced an immeasurable loss when their mother Mashonna Dunnigan was killed on Sept. 14.

“She was just the best,” said Malachi Williams of his mother after the win over South Jones. “She always made sure we were taken care of and she tried to make everything we did into something fun. I miss her so much, but I know she was watching me tonight.”

Before the game, Williams held a picture of his mother looking down from the clouds over him on a football field.

Emotion and pain were laid bare plainly to see on his face as he gazed at his momma.

Thursday, Williams snagged an interception in the second half as BHS led 28-14 at halftime and kept pouring it on in the final two qurters

South Jones (2-8) head coach Todd Breland was coaching in his final game as the head man at the Ellisville based school. There’s no doubt that his group of Braves wanted badly to send their coach into retirement with a win, however there might have not been a team more starved for a victory in all of Mississippi than this group of Brookhaven High Panthers.

BHS got on the board quickly when senior defensive end Zamarion Diggs held up South Jones quarterback Luke Griffin, who fumbled the ball as Diggs tried to bring him down on the second play of the game.

Freshman Durrell Washington Jr. picked the ball up on a bounce and ran in for a touchdown that helped put BHS up 8-0 with just one minute off the first quarter clock.

South Jones responded when Griffin hit sophomore Jy Cook on a touchdown pass later in the first quarter that made the score 8-7. Those two also connected on a passing connection that pulled SJ to within 22-14 midway through the second quarter.

Brookhaven High junior Xavier Gayten made sure that his senior teammates would end their 2022 season with a victory though.

A week after going off for over 300 yards rushing s in a loss to Natchez, Gayten was again spectacular with the ball in his hands on Thursday night.

He finished the game with 259 yards rushing on 23 carries. He averaged 11.3 yards per carry and scored four touchdowns on the night, including one on the first BHS drive of the second half.

Senior running back Dashawn Wilson added 57 yards on the ground and a touchdown on six carries. Freshman quarterback Dreamus Harron capped the Ole Brook scoring in the second half with a short touchdown run.

In nine games this season, Gayten ran for a career-high 1,654 yards and scored 13 touchdowns.

Senior Landon Smith was a leader on the offensive line that paved the way for Gayten to go over the century mark this season.

“The younger guys know that they’ve got next year to win games and improve as a team and when I was younger, I might have had that same attitude at times too,” said Smith. “But this was it for me when it comes to high school football, and we really wanted to end the season on a high note and tonight we came together as a team and got some big plays from some of the seniors along with those underclassmen.”

“Glad to send these seniors out with a win,” said Peavey. “I think we were focused and Xavier’s speed is a difference maker, especially when we block like we did tonight.”