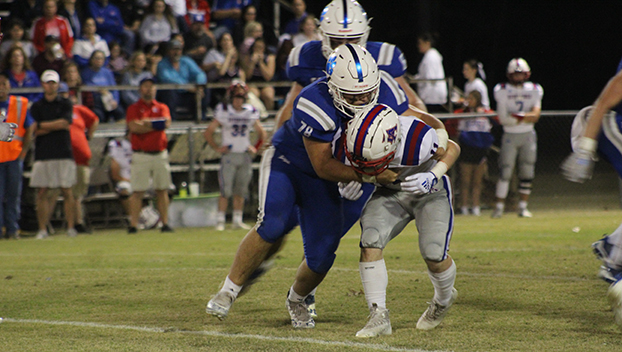 The Riverfield Raiders play an old school style of football. The team from Rayville, Louisiana is known for playing with discipline offensively as they move the ball via the rush behind a technically sound offensive line.

Friday in a MAIS 4A second round playoff matchup, the Raiders scored with 43 second remaining to pull within 22-21 of the home team, the Brookhaven Academy Cougars.

There was no doubt that Riverfield would go for the win and the 2-point conversion.

The handoff went to 6-foot, 185-pound senior running back Brett Whorton and he smashed into the endzone to score the game winning points in a 23-22 win.

The winning score came just as rain began to fall on R.M. “Red” Stuard Field and a stadium full of dejected and wet Cougar fans filed to their cars while parents consoled their student-athletes on the field and under the awnings of the field house.

Riverfield has played a loaded schedule with losses to 5A powers Copiah Academy and Simpson Academy. The Raiders are now in the final four of MAIS 4A football along with St. Joe, Adams County Christian and Tri-County Academy — all schools Riverfield faced during the regular season.

The Raiders scored quickly to open up a 7-0 lead on the first drive of the game, but Hart and his coaching staff made adjustments defensively and that score held until halftime.

Junior punter Cooper Strickland might have been the MVP of the first half for the Cougars as he twice flipped the field with big kicks to put RA a long way away from the endzone.

The Raiders controlled the ball and momentum as the home team only really got three full first half possessions.

The third quarter started with BA receiving the kickoff and that’s when the Cougar offense came alive.

The home team in blue covered 65 yards in seven plays and pulled even at 7-7 when senior quarterback Elijah Helton ran in for an 11-yard scoring sprint.

The crowd came alive itself when Helton then hit senior wide receiver Trevor Fortenberry on a 48-yard pass on the next drive.

Fortenberry tight roped the sideline and stepped out at the 2-yard line on a play that ended the third quarter.

Helton scored from the 1-yard line and BA led for the first time with 11:49 remaining in the game.

Riverfield responded rapidly though as a strong kickoff return began the following drive near midfield.

The ensuing possession for BA went backwards to begin and the Cougars were quickly facing a 3rd-and-long situation.

Helton stood in the pocket and hit Strickland on a slant that gained 25-yards and energized the Cougar sidelines.

Fortenberry moved from wideout to running back and ran around the right side of the defense to put BA back ahead with three minutes remaining in the game.

The 2-point conversion attempt was good when Helton hit Fortenberry on a passing play to make the Cougar lead 22-15 after a nine-play drive that went for 84-yards.

It felt like the score might have come a little too quickly though, as Riverfield wasted no time in issuing a reply.

For a team that runs mostly out of an I-Formation, the visitors went to a shotgun with an empty backfield and picked up chunks of yardage quickly.

Drew Holley, a 5-foot-8 quarterback for the Raiders, scrambled for 12-yards down to the BA 14-yard line with 100 seconds remaining in the game.

Holley looked bottled up in the backfield but faked like he was flipping a pass out to freeze the defense and give himself room to run.

That sleight of hand set up the eventual TD and 2-point try that won the game for the team from Richland Parish in northeastern Louisiana.

The two schools were once members of the same district and in 2019, Riverfield came to BA and left with a 20-7 win. That RA team went 13-0, won a MAIS state title, had 19 seniors and played an identical style of football as the one that visited on Friday.

“I’m really proud of this group of seniors,” said Hart of his team. “They only had one year together as we had some guys come out and play for the first time and some guys to move in and they really gelled together to become our leaders. We never had any discipline issues and when that’s the case and you can just focus on coaching football, that makes this job very enjoyable.”