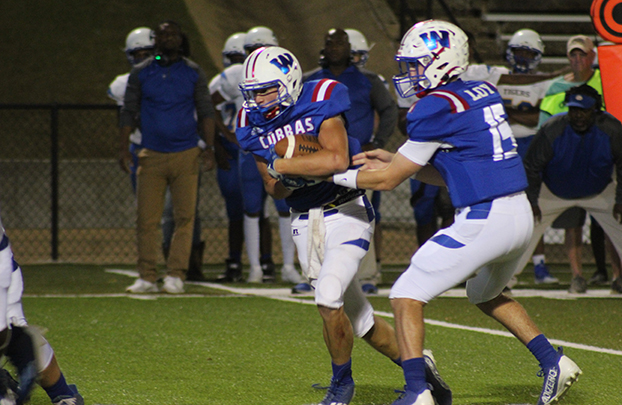 (CUT – The Wesson Cobras will host a MHSAA 3A second round game on Friday when they take on the Tylertown Chiefs at 7 p.m. in Stone Stadium.)

There is but one area team left alive in the 2022 high school football postseason and that means plenty of eyes will be on the MHSAA 3A second round game between Wesson (6-5) and Tylertown (6-5) on Friday.

The game is a rematch of the season opener played between the schools on Aug. 26 in Wesson.

That one will go down as one of the most exciting high school football games that most in attendance had ever seen — a 49-48 win for Wesson that came on a 2-point conversion with no time left on the clock.

Wesson got through the first round in another exciting finish last week with a 34-28 overtime win at Union High.

Cobra senior quarterback Will Loy was masterful in the win over Union. Loy went 29-of-46 passing for 370 yards and two touchdowns. On the ground, Loy carried the ball four times for 18 yards and another score.

The Cobras also got rushing touchdowns from freshman O’Mari Johnson and sophomore Wyatt Hughes in the win over Union.

Johnson is one of the most highly touted ninth graders in the state, he already holds an offer from Mississippi State. He was a force catching the ball in the first round as he hauled in 12 passes for 183 yards and one score.

Sophomore Deshawn Smith has emerged as one of Loy’s favorite targets this season and he was also big in the win last week, catching 11 passes for 112 yards.

The Union Yellow Jackets came in with an 8-2 record and were the first-place finisher in Region 5-3A during the regular season.

Wesson finished fourth in a loaded Region 6-3A.  Region 6 champs Raleigh (10-1) whipped Morton 52-6 last week and play St. Stanislaus in the second round this week. Region runners-up Hazlehurst (10-1) beat Clarkdale 26-6 in the first round and play at Jefferson Davis County on Friday. Magee (7-4) finished third in Region 6 and beat Enterprise-Clarke 13-10 on the road last week. The Trojans will play Jefferson County in the second round on Friday.

Tylertown finished as the second placed team in Region 7-3A behind Jefferson County (8-2) as the region champs from Fayette beat the Chiefs 34-0 during their regular season meeting.

In the first round, Tylertown beat Perry Central 40-21 last week.

Wesson answered every Union run of momentum with one of their own and tied the game at 28-28 when Loy scored on a rushing touchdown with six minutes left.

The Cobra defense blanked Union to start the overtime period and set up Loy to Hailey for the win.

It was a short touchdown run by Loy that set up the heart stopping finish between Wesson and Tylertown in the season opener.

A sneak from the 1-yard line by the senior quarterback came on the final play of regulation and pulled Wesson to within 48-47.

With multiple players battling cramping in a game that had a pace like a NASCAR short-track event, Wesson head coach Jeremy Loy didn’t hesitate to call for a 2-point conversion try and the win.

That winning attempt didn’t get off to a good start as Wesson scrambled to get in the correct formation.

Will Loy handed the ball off to senior running back Lucas McCree and instantly regretted that as the Tylertown defense converged on McRee to pull him down.

McCree kept his legs pumping though and tried to will himself towards the north endzone of Stone Stadium in Wesson.

Just as it looked like his knee was about to hit the turf and end the game, McRee turned and gave the ball to Johnson — who shot into the endzone and set off a wild celebration on the sideline.

Keonnis Davis is a 6-foot-1 freshman quarterback that runs the Tylertown offense. Through 11 games in 2022, Davis has thrown for 2,257 yards, 20 touchdowns and eight interceptions.

“We’ve got to try and make their quarterback uncomfortable and not let receivers get behind us,” said Jeremy Loy.

Junior Kylon Magee is the leading pass catcher for THS. He’s pulled in 43 catches for 732 yards and six scores. Ahmad Thompson, a 6-foot-3, 235-pound senior, leads Tylertown on the ground with 12 rushing touchdowns.

“Our defensive line and linebackers will need to win the line of scrimmage,” said Loy. “We will have to bottle up all that speed that Tylertown brings and tackle well if we want to win.”

Will Loy has also passed the 2,000 yards mark this season through the air — he’s at 2,262 yards with 25 passing touchdowns coming into the second round. He’s also scored nine times on the ground.

Johnson has rushed for seven touchdowns and caught 51 passes for 889 yards and 11 more scores. Smith is second on the team with 47 catches for 748 yards and eight touchdowns.

“We need to execute the plan and not get behind the chains on offense with penalties or mental mistakes,” said Jeremy Loy. “We’ve just got to make plays — we’ve got to beat their man coverage and protect our quarterback.”

The winner between the Cobras and Chiefs will move on to face the winner of the Raleigh and St. Stanislaus game in the third round.

Kickoff between Wesson and Tylertown is set for 7 p.m. in Stone Stadium on the campus of Copiah-Lincoln Community College in Wesson.