Wesson jumps up early, never looks back in 3A second round win over Tylertown 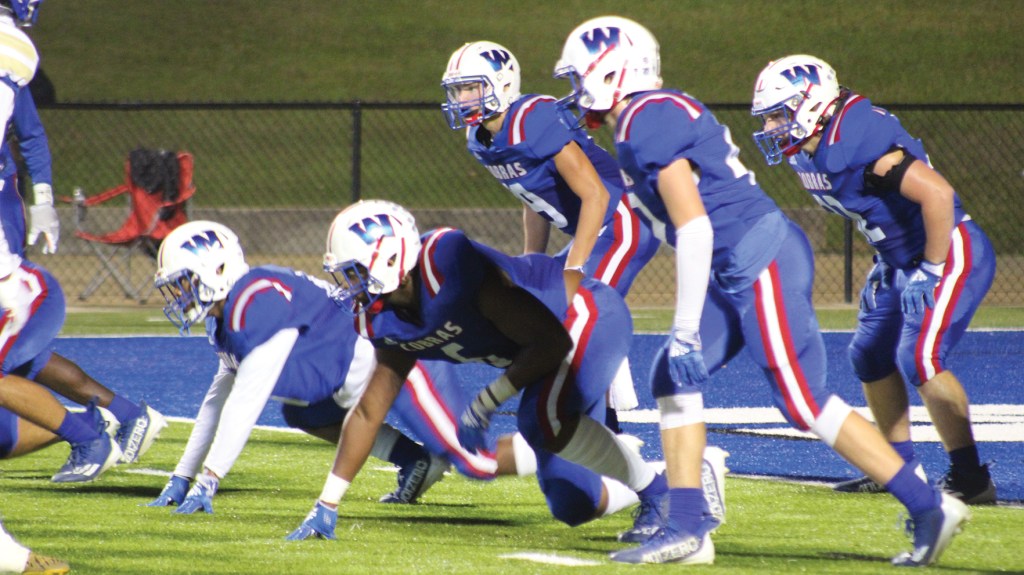 PHOTO BY CLIFF FURR The Wesson defense was strong from start to finish on Friday in a 33-19 win over the visiting Tylertown Chiefs. The Cobras will next play the Raleigh Lions in the MHSAA 3A third round.

WESSON – Friday night was the fourth meeting between Tylertown and Wesson over the last two seasons. In two of those previous games, the Cobras jumped out to big leads before Tylertown sprung comebacks with explosive plays in the second half.

That didn’t happen Friday though as the Cobras jumped out to a 13-0 lead and never trailed on the way to a 33-19 win in a MHSAA 3A second round matchup between the schools.

“Our coaches put together a great plan on Sunday and the boys came out tonight and executed it,” said Wesson head coach Jeremy Loy. “We had guys giving it everything they had on every down and that’s what you’ve got to do when you’re facing a team with the offensive skills that Tylertown has.”

The Chiefs (6-6) from Walthall County received the opening kickoff but found themselves moving backwards after a big sack from Wesson senior defensive end Cody Munn on third down of the first Tylertown series.

That three-man line gave Tylertown fits up front all night as the Cobras routinely made Tylertown sophomore quarterback Keonnis Davis uncomfortable in the pocket.

Wesson senior quarterback Will Loy is a four-year starter at the position who’s thrown over 100 career touchdown passes and Friday he looked in complete control of the offense on the first two Cobra possessions.

Loy hit freshman wide receiver O’Mari Johnson with an absolute dime from 25-yards out to put Wesson up after the first Cobras possession of the night.

The ball dropped in over the shoulder of a Tylertown defensive back and Johnson caught it in stride to put his team ahead 7-0 following the Patrick Coleman PAT kick.

“That just comes down to timing,” said Loy. “It’s something that me and the receivers work on all year, and I’ve got the trust that they’ll be in the right spot when I put the ball in the air.”

Following another THS punt, Loy snuck in from the 2-yard line to give the Cobras a 13-0 lead later in the first quarter.

Tylertown had its best offensive possession of the first half midway through the second quarter when they got down to the Wesson 4-yard line for 1st-and-goal.

Wesson made three straight stops, setting up a 4th-and-goal from the 2-yard line. The Chiefs went with a jumbo package and scored on the short rush when big halfback Ahmad Johnson fell into the endzone for the score.

Cobra coach Jeremy Loy was on the officiating crew after the touchdown due to a missed penalty that should have moved the ball back on the score and reset the fourth down play.

Wesson went into halftime with a 13-7 lead, but the home fans were probably feeling like it should have been more after their team dominated most of the first two quarters.

The Cobras received to start the second half and had a statement drive on that first possession.

Loy hit sophomore receiver Deshawn Smith for a long gain that went deep into THS territory and then found Johnson on another crucial completion that saw the freshman receiver pulled down at the 1-yard line.

It was another Loy run from the 1-yard line that capped the drivee and put Wesson ahead 19-7.

The ability for Loy to punch the ball in when Wesson gets close has been a key for the Cobra offense in 2022. The team lost running back Zevantae Stapleton to a leg injury just as the season was getting ready to begin.

A 51-yard touchdown pass from Loy to receiver Caleb Chase later in the third quarter further padded the Wesson lead to 26-7 and had Cobra fans feeling some relief just as rain and cooler temperatures moved into Stone Stadium at the start of the fourth quarter.

THS picked Loy off a couple times in the game and one of those interceptions gave the Chiefs a short field, which led to another Thompson rushing score early in the fourth quarter to cut the Cobra advantage to 26-13.

The teams later traded turnovers as Wesson fumbled possession away but got the ball right back when Johnson hauled in an interception. Linebacker Cotton Westbrook also picked off a pass in the win for Wesson.

As the Cobras huddled on the field afterwards and celebrated around their head coach, their senior quarterback and captain had them break the huddle with a cheer for the defense.

Senior linebacker Lucas McRee is a big piece of that defense and Friday he blitzed on some plays, dropped back into coverage on others and generally made sure his fellow defenders were in the right place on each snap.

His head coach had said that making the THS quarterback uncomfortable would be a key to Wesson winning and McRee was a big piece in making that happen.

“We had three guys up front in Cody, Troy and Stevie who were beating their five lineman and that really opened up chances for our linebackers and defensive backs to make some plays,” said McRee. “We knew from the last time we played them what they were capable of if their offense got hot.”

The last time the teams met was the season opener, a 49-48 walk-off win for Wesson that came on a 2-point conversion with no time left on the clock.

The rematch on Friday didn’t have any last-second heroics, because they weren’t needed. The Cobra defense made sure of that.

“Just can’t say enough about how proud I am of all these kids,” said a smiling Jeremy Loy after the game. “They’ve got so much heart and so much toughness and they showed that tonight.”