A Mississippi legend, the late Ray Guy was a talent unlike any other 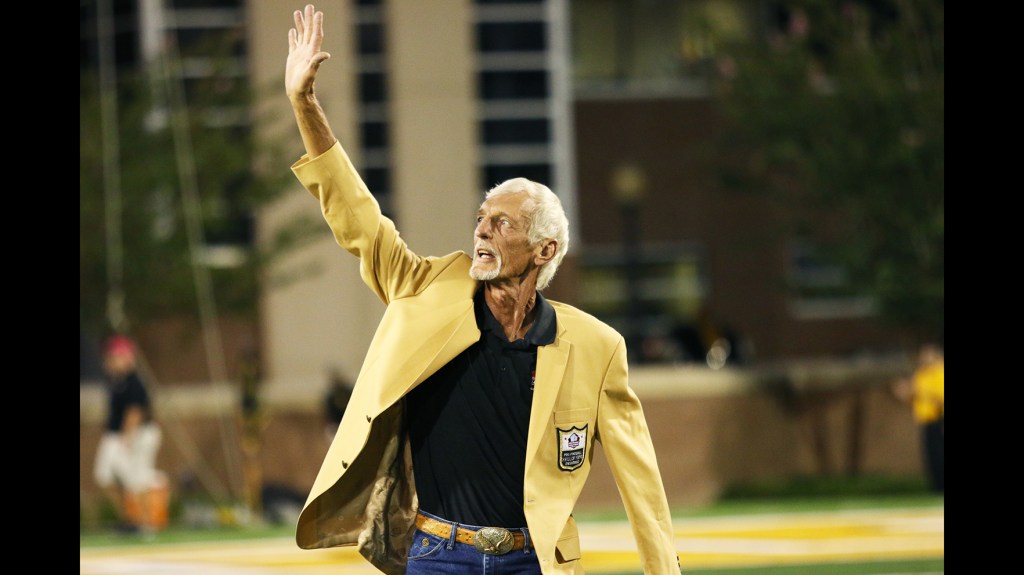 PHOTO BY USM SPORTS INFO NFL Hall of Famer and Southern Miss legend Ray Guy passed away on Nov. 3. Guy is considered to be the greatest to ever play his position and was a first round draft pick by the then-Oakland Raiders.

I am a reader and have been from a young age. My momma modeled what that should look like to me as a child.

She would go to Delchamps and load up on romance and western paperbacks that would pile up on top of a buggy that was already overflowing with groceries.

Having a novel always at hand made an impression on me and picking up a book became a natural way to kill time when I was a child.

The fact that we only had four channels on our old Zenith cabinet television that sat on the living room floor might have also had something to do with it too.

Most elementary teachers then, as they do today, kept a small classroom library in the back of the room. It was usually filled with battered paperbacks that were held together with tape from frequent use.

My third and fourth and fifth grade teachers always had a couple books that dealt with fun facts about the NFL or NBA or MLB. They would contain interesting stories or wacky tales from those professional leagues.

I read and reread them throughout the course of a school year, doing so when I had a spare minute after a spelling test or before the dismissal bell rang to send us to the parent pickup line.

It was in one of those books that I first found one of my favorite football players as a youth — Ray Guy.

Guy died earlier this month at the age of 72. He was the first NFL punter inducted to the NFL Hall of Fame and was a legend during his career at the University of Southern Mississippi.

He is widely considered the greatest punter to ever put his toe to leather.

What I was looking for when I found Ray Guy in one of those slim volumes of football facts for kids was someone with a connection to the Magnolia State that I could be proud of.

I was aware as 10-year-old that we did not have professional sports in Mississippi, and I knew that would not change anytime in the next 100 years.

Yes, the Saints and Braves were the teams that many of my classmates cheered for, but those teams belong to Louisiana and Georgia at their core.

I was looking for something that could make me puff out my chest, something to be proud about as a kid from southwest Mississippi.

So, reading about how the greatest punter of all-time played collegiately at the school in my backyard piqued my interest and the blurb mentioned how he once hit the gondola scoreboard at the Superdome with a punt just to prove he could and how he played his entire NFL career for the Raiders during their peak era of dominance — that made Ray Guy even more mythical in my developing brain.

Guy was a native of Georgia, but in my mind that never mattered. He was ours — he belonged to Mississippi and all the glory and honors that came to him were ours to share.

Who needs an NFL team in your capital city when you are cranking out legends every year like Mississippi has long done?

When I was in junior high, my school library got a copy of a coffee table book that commemorated the 75th Anniversary of the NFL in 1994.

It retailed for $100 dollars and was filled with full-page bios and artist renderings of each honoree.

That was probably the first time I ever laid eyes on Guy and it was just a painting, but you could see how lithe and athletic he was — even in paint — as his leg went high in the air on the follow through of a punt.

An adult around that time called me a “well of useless information.” That didn’t make me feel bad though. It just meant I read about sports, talked about sports and would pepper anyone who’d listen with sports facts and information.

Most of what I had gleaned about Ray Guy was learned from the great Clarion Ledger columnist, Rick Cleveland.

So, when I told anyone who’d listen that Ray Guy was also the single season leader in interceptions at USM or that he threw a no-hitter in baseball for the Eagles or that in high school when he competed in the triple jump for the first time, he jumped further farther than anyone in the state that year — I was just recycling facts I’d picked up from reading Cleveland.

In his column commemorating Guy after his death, Cleveland called him the greatest athlete he’d ever seen and that’s some mountaintop-level praise.

Not saying I chose to attend USM after Co-Lin because of Ray Guy, that decision was influenced more by where Angela Davis was going to college, but I never stopped wanting to hear all the stories I could get about the greatest punter of all time.

The ole Mike Anderson’s sat near the country club in Hattiesburg and one October evening a coworker and me found ourselves in the bar area with freshly-cashed paychecks and a table full of empty oyster shells before us.

“Hey, that’s Ray Guy at the bar,” said someone at the table beside us.

And there he was, looking like he had just come off the course for a post-round beverage or two.

And as crazy as this sounds, he was not the only NFL Hall of Famer in the restaurant that night.

Another famous USM alum who was still playing quarterback in the league at that time was dining in the main room with his wife and agent.

That table was off limits though as they were enjoying dinner and projecting an air of “do not disturb.”

That was not the vibe around Ray Guy in the bar of the same restaurant though.

It was more like, come hang out, buy me a Coors Light and ask me about the Raiders.

I nervously found a way to get a handshake and a smile from Ray. He probably thought it was silly for a 21-year-old to tell him that I was a “life-long fan.”