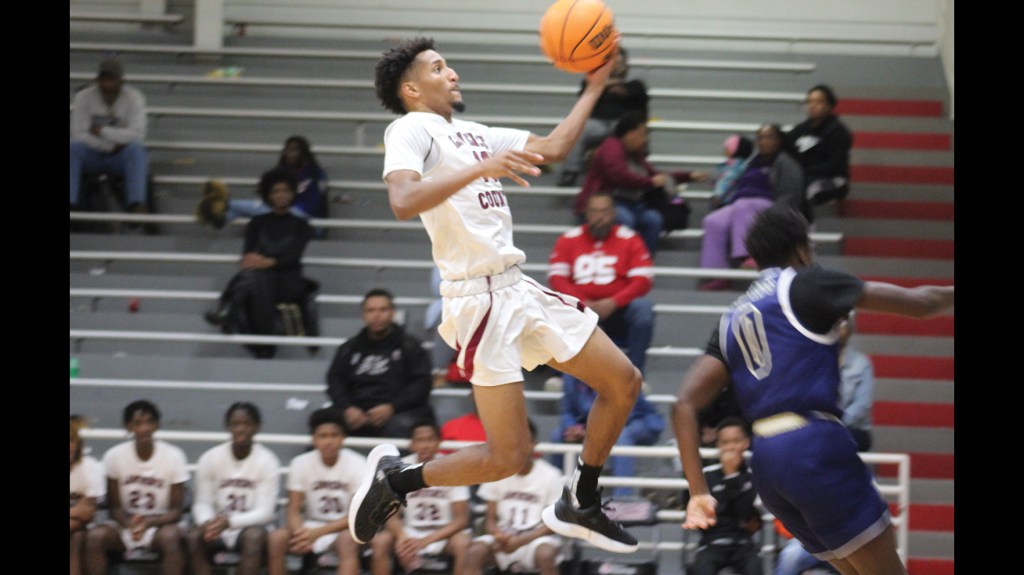 PHOTO BY CLIFF FURR Lawrence County senior guard Keith Taylor glides in for a layup Monday against Bogue Chitto. Taylor was the high scorer for LC in a 75-60 win that capped a day full of games at the annual Lawrence County Thanksgiving Tournament.

The Lawrence County Cougars (3-2) played a confident brand of basketball Monday in their home gym against Bogue Chitto (2-1).

Coach Pat Bridges, in his 14th season as head coach of his alma mater, has a group of Cougars that spread the floor out and move the ball until they get the shot they’re looking for.

Monday in the finale of the LC Thanksgiving Tourney, the corner 3-pointer was working early and often for Bridge’s squad.

Lawrence County made 12 combined 3-pointers in a 75-60 win over Bogue Chitto.

LC didn’t panic when the offense got started slowly. The Cougars forced five straight turnovers as they started to extend their defensive pressure, despite still not scoring.

Senior guard Keith Taylor is one of the leaders for LC. Taylor hit a corner 3-pointer to get his team on the board and it wasn’t long before the Cougars pulled ahead on layup by 6-foot-5 junior power forward Terrell Gholar by a 9-8 advantage.

Lawrence County senior guard Trey Jones hit a 3-pointer at the first quarter buzzer to extend the Cougar lead to 20-14.

In first quarter, Taylor scored half of his team’s points as hit two 3-pointers in the period and had 10 points.

It was a nice bounce back win for Lawrence County after losing 53-48 at Brookhaven High on Friday.

Lawrence County led 34-24 at halftime and Bogue Chitto came out with a couple strong possessions to cut that lead in what appeared to be a close game.

Smith hit five 3-pointers in the third quarter to help the home team build a 58-38 lead after three quarters. He finished with 17 points.

Taylor led LC with 25 points in the win. His game isn’t one of just sitting in the corner, waiting for the ball to be swung towards him.

On several possessions Monday, Taylor faked his shot and put the ball on the floor before pulling up for a mid-range jumper.

“That’s something he’s just started developing this year — that midrange aspect of his game,” said Bridges of his senior leader.

“We’ve got a good group of kids, they share the basketball and aren’t selfish with it.”

Both Jenkins and Thompson scored 18 points each to lead Bogue Chitto. Magee was also in double figures with 13 points.

In other games played earlier Monday at Lawrence County

The Loyd Star Hornets and coach Seth Britt moved to 5-2 on the season with a 59-56 win over the Parklane Pioneers.

Senior guard Julius Smith led the Hornets early as he scored 12 of his team’s 17 points in the first quarter. Smith finished the game with 17 points. Senior guard Blake Thornton added 13 points and junior forward Colby Terrell chipped in 10 points for the Hornets.

Loyd Star is back in action on Tuesday, Nov. 29 when they travel to face Salem in Walthall County.

The Brookhaven High boys team won its third game in a row with a 75-70 win over the Jefferson Davis County Jaguars on Monday.

BHS junior guard Jaylen Haliburton came out on fire in the first quarter as he hit four 3-pointers and scored 14 points in the opening eight minutes of play. Haliburton finished with 35 points to lead coach Charlton Grey’s team.

The Panthers (4-3) also got a 20-point effort from sophomore guard Jay Ross in the win.