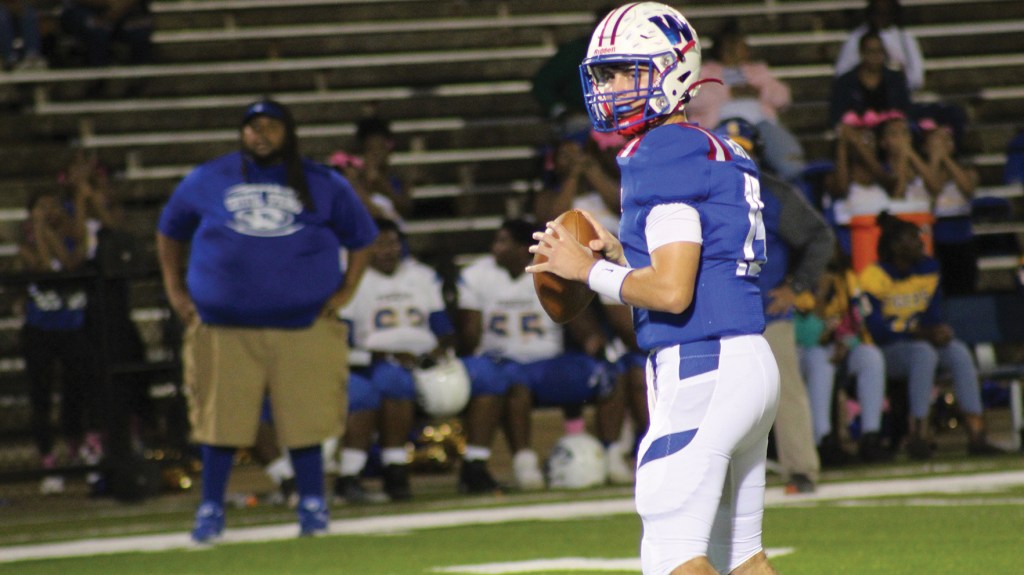 Wesson senior quarterback has been named Mississippi Association of Coaches (MAC) 3A Offensive Player of the Year after throwing for 2,765 yards while leading the Cobras to the third round of the MHSAA playoffs. (Cliff Furr | The Daily Leader)

As is the tradition, the end of the MHSAA football season was marked by the championship games this weekend and with that came the annual release by the Mississippi Association of Coaches (MAC) of their All-State teams.

The biggest honor handed out to a local athlete went to Wesson senior quarterback Will Loy, who was named MAC 3A Offensive Player of the Year.

A 4-year starter under center for his dad and head coach, Jeremy, Loy was sensational in leading the Cobras to the third round of the 3A playoffs.

He finished the season by going 180-of-318 passing — both career highs in attempts and completions. On the season, he threw for a career best 2,765 yards.

Loy threw for 29 touchdowns against just eight interceptions in 13 games as a senior.

It was on the ground where Loy showed the most improvement this season as his work to bulk up allowed him to be more physical on sneaks at the goal-line.

This season he rushed the ball 27 times for 115 yards and 11 touchdowns — all career best numbers on the ground.

Two of the six losses this season for Wesson were against eventual 3A state champs Raleigh, including a 56-28 win by RHS that eliminated the Cobras from the playoffs.

Raleigh won the 3A championship with a thrilling 55-52 win over Noxubee County.

The 1A title was won by Bay Springs with a 22-0 victory over McEvans. Bay Springs, who has played in the same region the last two years as Enterprise, has now won a championship in back-to-back seasons.

The Scott Central Rebels also went back-to-back with a 42-12 win against Charleston in the 2A title matchup.

The most thrilling finish of the weekend was a 17-14 victory for Louisville over Mendenhall in the 4A championship game. Louisville forced a turnover with under a minute remaining and kicked a field goal as time expired to remain perfect, 11-0, all-time in state title games.

Picayune and West Point played in the 5A championship for a second straight year and it was the Maroon Tide from Picayune that came out victorious again with a 31-21 win.

Starkville High, who began region play with an 0-3 record, impressively handled a favored Brandon High team 48-32 in the 6A title game to cap the weekend of games played on the campus of Southern Miss in Hattiesburg.

Loy wasn’t the only Cobra to be credited for his play by the MAC.

Johnson caught a team best 60 passes for 1,026 yards and 13 touchdowns. He was also second on the team with seven rushing scores. Johnson carried the ball 52 times for a team high 431 yards.

Bogue Chitto and coach Gareth Sartin also had a pair of selections for the MAC 2A All-State team in junior kicker Andrew Merrell and senior lineman Jay May.

Merrell was tabbed 2A First Team All-State in his first season handling the kicking and punting duties for the Bobcats.

As a punter, he had a season long 62-yard punt and averaged 39 yards per punt. He also made 26 tackles as a safety.

A four-year starter, the athletic and versatile May has been a cornerstone along the line for the BC coaching staff.

A 2A Second Team All-State selection, May played tackle, but has seen time at virtually every spot along the line during his career. A linebacker on defense, he made 74 tackles, recovered two fumbles and returned an interception for a touchdown.

Lawrence County junior running back Ahmad Hardy was picked for the MHSAA 4A All-State Second Team after leading the Cougars to a 7-3 record in 2022.

A human battering ram with the ball in his hands, Hardy rushed 101 times for 1,397 yards and 16 touchdowns for coach Jesse Anderson.