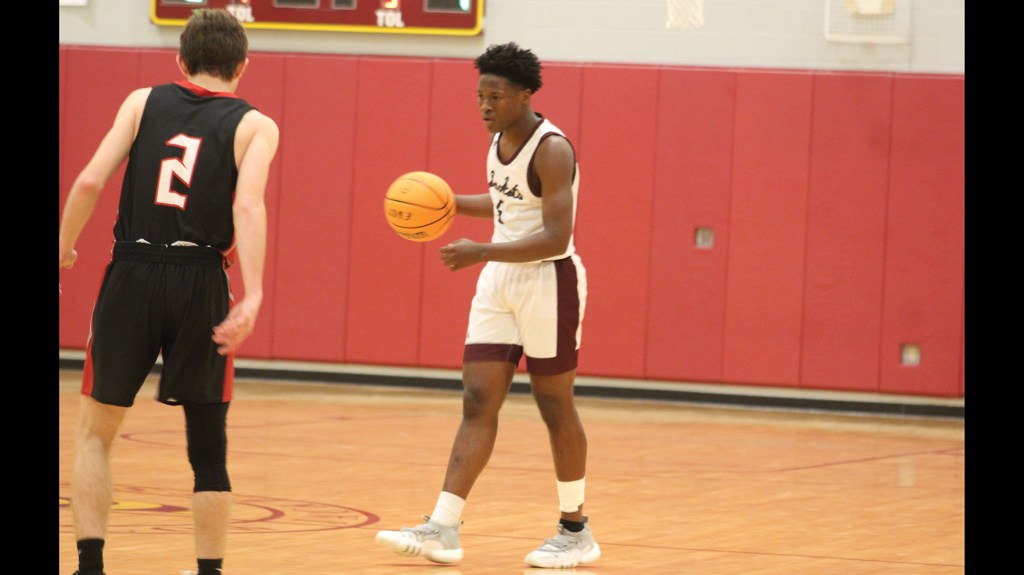 Photo by Cliff Furr Enterprise sophomore guard Landon McNickles brings the ball up against Loyd Star on Tuesday in a 64-40 loss for the Yellow Jackets.

Loyd Star boys’ basketball coach Seth Britt knows his team could have a different leading scorer on most nights.

Tuesday at Enterprise, it was senior guard Julius Smith who had the hot hand in leading the Hornets to a 64-40 win over the EAC Yellow Jackets.

Smith shot a sizzling 7-of-12 from the 3-point line to finish with a game high 23 points to pace Loyd Star to a victory that made their record 6-3 on the season.

The home team and coach Shane Adams led 13-7 after the end of the first quarter, but LS took command in the second quarter by outscoring the Jackets by 18 points in the second eight minutes of the game.

It was a 3-pointer by Smith with 5:36 left before halftime that gave Loyd Star a 17-16 lead that they’d never relinquish. Senior guard Blake Thornton knocked down a 3-pointer on the next trip as Adams called a timeout in an attempt to stop the bleeding.

Loyd Star stayed hot though and a 3-pointer by Smith just before the halftime buzzer gave the visitors a 30-18 lead at the break over their county rivals.

Smith’s jump shot really doesn’t have much jump in it. His follow through is consistent though and you can tell the motion of his shot has been honed over years of repetition and practice.

The Hornets finished 10-of-29 in 3-point attempts in the win.

“Julius had to work to get into basketball shape last season when he got done with football,” said Britt. “He drew his first start for us as a freshman. This season he’s hit the ground running and was ready to be one of our leaders from the first game.”

Smith, Thornton and junior forward Colby Terrell all return as starters from last season for Britt. Loyd Star went 13-13 last season and finished in second place in Region 7-2A behind Amite County.

The 2021-2022 edition of the team won a first-round playoff game over North Forrest before losing 78-50 to Newton High in the MHSAA 2A second round.

This season the Hornets have four players averaging double digits ahead of the upcoming Christmas break.

Terrell is scoring a team best 18.8 points per game while pulling down 10.2 rebounds per night. That’s twice as many points per game than he averaged last season as a sophomore.

The son and grandson of basketball coaches, Terrell scored a season high 24 points in an 80-74 win over 4A North Pike.

Tuesday, he scored 14 points and grabbed 12 rebounds against Enterprise with his ability to read the ball off the rim and a willingness to move his feet in order to track it down.

Mills and junior guard Caden Yarborough round out the Loyd Star starting lineup along with Smith, Terrell and Thornton.

Keeping those five out of foul trouble while building depth off the bench with the younger players is a big part of what Britt has been trying to accomplish in the early going of the season.

Against EAC, the Hornets got just three points from the bench — two from sophomore Ethan Smith and one from junior Braxton Williams.

“This is the first group that I’ve gotten to coach all the way through from junior high,” said Britt. “They’ve done a really good job of playing within our system and sharing the ball thus far.”

Waldrop is the most experienced player on the team and a multi-year starter. Williams is a 6-foot-4 forward that joined the basketball team after previously only playing football.

On Tuesday, they scored four and six points respectively.

The Jackets are members of Region 8-1A alongside Richton, Resurrection Catholic, Lumberton and Salem.

“I’ve got a young group and we’ve still got to figure out how to put it together for four quarters,” said Adams. “I told them tonight that their best basketball is still ahead of them. The last two games before this, we played well enough to win. Tonight, we started strong, but couldn’t come back from the way they shot the ball in the second quarter. Coach Britt and his team do a good job of getting open 3-point looks in transition and tonight they made some big shots.”