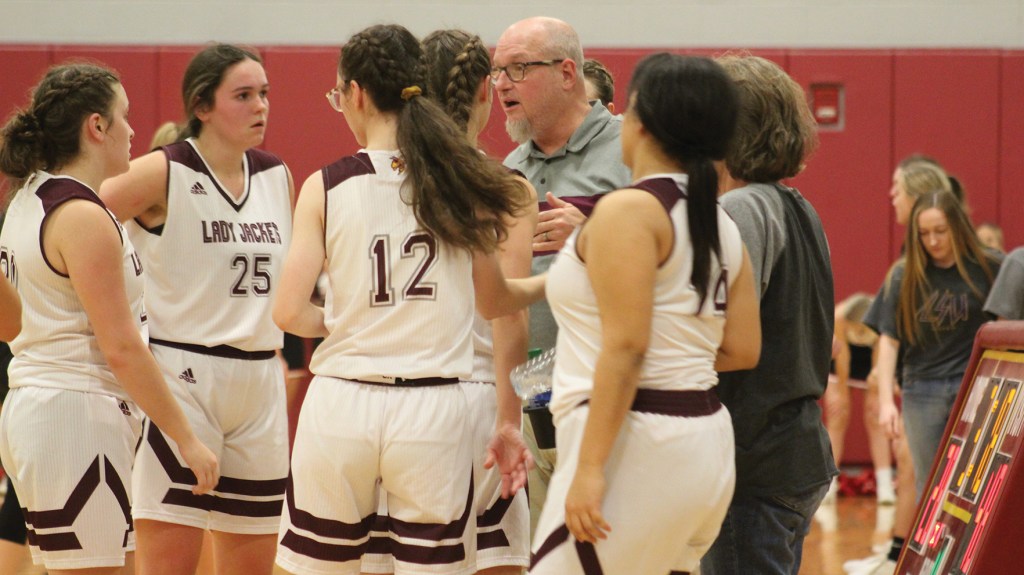 Photo by Cliff Furr Enterprise coach Shane Adams gathers his squad Tuesday in a county matchup with Loyd Star. The Hornets prevailed by a 56-30 final score.

Cruise called a timeout in the early going of the second quarter after Enterprise sophomore forward Natalie Williams hit a layup that cut the LS lead to 10-9.

The Hornets had been up 9-4 after the first quarter, but back-to-back buckets by Williams tightened the game up.

The pep talk worked as Loyd Star cut down on careless turnovers and pulled away for a 56-30 win that broke a four-game losing streak for the Hornets.

“Once we settled down, we showed glimpses of what we want to do offensively,” said Cruise. “We are a work in progress, but we have been steadily improving.”

Loyd Star knew there would be growing pains this season after the graduation of four-year starting point guard Aubrey Britt. Britt averaged 13.4 points per night over her 95-game varsity career.

On Tuesday, Leggett led the way with 15 points and nine rebounds in the win. Hughey scored 14 points, handed out five assists and made three steals for LS.

An offensive rebound and putback bucket by Hughey gave Loyd Star a 23-14 lead just before the buzzer sounded to end the second quarter.

The game got off to a slow start as the first points came on a Leggett 3-pointer after three minutes of scoreless play.

The Hornets also got seven points off the bench from eighth grader Maddi Kate Britt.

Loyd Star moved to 3-6 with the win. Two of those losses were to 4A Lawrence County, one was to 4A North Pike and another was to 3A Franklin County.

On Dec. 13 the Hornets will host Wesson and on Dec. 15 they’ll host North Pike.

“The girls have paid more attention to detail and it has shown in practice,” said Cruise. “As long as we hold each other accountable we will continue to grow.”

A veteran coach, Cruise came to Loyd Star after last coaching the boy’s team at 5A Neshoba Central High.

“We missed 14 free throws against Sacred Heart last week and lost by three points,” said Adams. “When we can figure out how to play with confidence and put the ball in the hole, we’re going to be alright. The wheels fell off tonight because we didn’t shoot it well, but they’ve got to keep their eyes forward and know that we’re capable of playing better.”

Williams, who has a crafty style in the paint, scored 16 points to lead EAC. Case added nine points and Jergins scored four points.

Enterprise will be on the road next week with a Tuesday trip to Mize and a Thursday game at Wesson.