Mississippi mourns the loss of Mike Leach, a football coach like none other 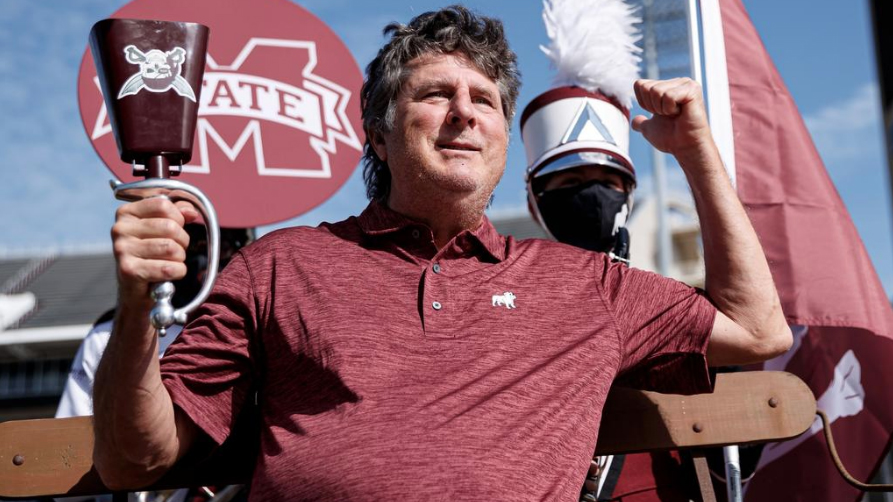 Mississippi State head football coach Mike Leach passed away Monday in Jackson at the age of 61.

The school announced on Sunday that Leach had been airlifted to Jackson following a medical emergency at his home.

Leach is survived by his wife Sharon and four children.

In the world of college football, a now billion-dollar industry that has schools trying to constantly outdo each other in pursuit of future NFL talent, Mike Leach was a breath of fresh air.

His love of pirates and their history extended to his autobiography which was titled, “Swing Your Sword: Leading the Charge in Football and Life.”

Plenty of coaches will cite the ancient Chinese miliary text, “The Art of War,” by Sun Tzu as inspiration for their style of play. Leach did more than just give lip service to the parallels between football and battle by teaching a class on Insurgent Warfare and Football during his time as head football coach at Washington State University. Leach later brought the course to MSU.

His post-game and post-practice rants and ramblings were a reporter’s dream.

While the head coach at Texas Tech, he roasted his team following a loss to Texas A&M for believing their own hype and listening to their “fat little girlfriends” about how good the team was.

He wasn’t politically correct. He didn’t offer up bland coach-speak. He always seemed to know a little about a lot of different topics.

He was truly like no other coach to come before him.

My wife isn’t someone that laughs at comedy just for the sake of laughing. She finds most standup comedians to be, meh.

Mike Leach was possibly her favorite comedian. His routine on the best types of Halloween candies following a win over Vanderbilt in 2021 is one that she can almost quote after repeated viewings.

“I mean, I completely hate candy corn,” Leach begins to the on-field reporter.

He was more than just a walking soundbite though. Mike Leach was a football savant.

In the late 1980s, he stayed connected over the phone with another football coach named Hal Mumme.

Mumme wanted to experiment with the passing aspects of football. He wanted to throw the ball more than it had ever been thrown. He wanted his receivers to line up wider than they’d ever lined up on the field. Mumme wanted to use simple concepts and routes that would give his quarterback somewhere rewarding and somewhere safe to throw it on every down, depending on what the defense looked like.

In Mike Leach, Mumme found the perfect Robin to his Batman. Before ever coaching together, they’d spend hours on the phone talking about theories and practices that they wanted to try out.

The pair first worked together at Iowa Wesleyan University, a small NAIA school. They then went to Valdosta State University and the success had there led to Mumme getting the head coaching job at the University of Kentucky, where he brought Leach along as his offensive coordinator.

Together, they created what is known as the Air Raid Offense.

If the rise of Mumme and Leach and the way they revolutionized the passing game of football interest you, then pick up a copy of “The Perfect Pass” by S.C. Gwynne.

Gwynne does a splendid job of laying out how the pair were unlike anything that have ever happened to the game before. You might have grown up thinking the Chargers of Dan Fouts or the BYU teams led by Lavell Edwards threw the ball a lot, but their numbers don’t compare to what Mumme and Leach did beginning at Iowa Wesleyan.

Sprinkled in are some great Leach anecdotes, like how he talked about scuba diving for an hour with an administrator during his initial interview at Iowa Wesleyan.

“I’m not sure what that guy is —but he’s not a football coach,” the admin told Mumme afterwards.

Leach graduated from law school at Pepperdine University after attending BYU as an undergrad. He found he wasn’t passionate about law, but instead found a fire burning within for coaching football.

He’s someone that knew what America looks like from one corner to the other. He graduated from high school in Cody, Wyoming, and owned a second home in Key West, Florida.

Peel back the layers of funny quotes, record breaking passing numbers and all the fun stuff wrapped up in the Leach package and you’ll find a winner.

In a combined 21 seasons as a head coach at Texas Tech, Washington State and Mississippi State — Leach posted a combined record of 158-107.

He was old school. He pushed his players and coveted toughness in them. His teams got better as his time at each school went on.

The final game Leach coached at Mississippi State was a 24-22 win over Ole Miss in the Egg Bowl.

The program he was building at MSU felt like it was on the rise just as his time on Earth was coming to an end.

There will never be another Mike Leach, but hopefully his path will continue to inspire others for years to come.

Leach showed all that you can reach the greatest heights of your profession and still be true to yourself along the way, even if your true self is a pirate.

Cliff Furr is the Sports Editor at The Daily Leader. He can be reached via email at sports@dailyleader.com