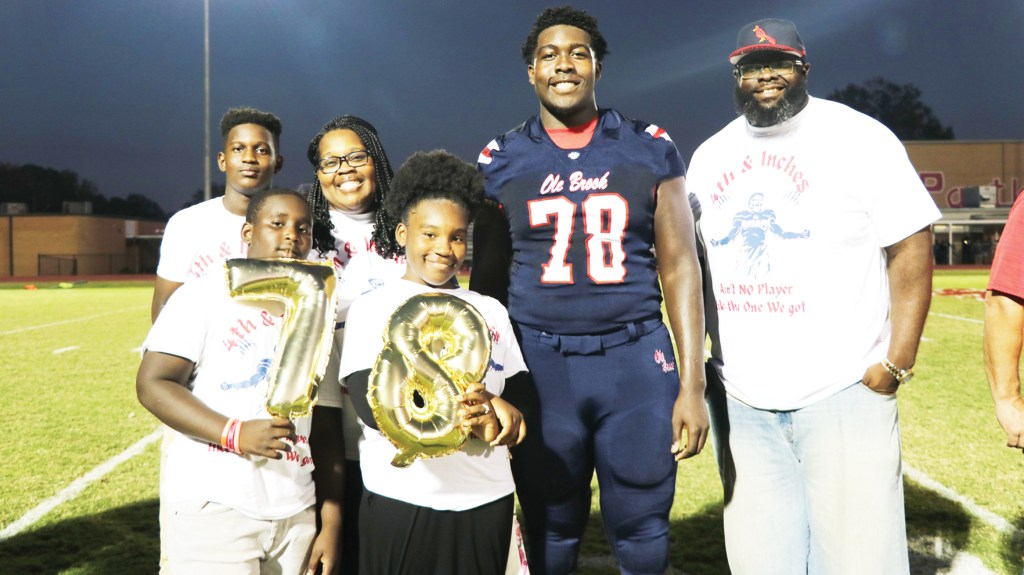 Photo Submitted Brookhaven High senior offensive lineman Amari Smith poses with his family on Senior Night before the Panthers beat South Jones in their season finale. Smith gave MSU a verbal pledge last week to sing a letter-of-intent with the Bulldogs for football.

Last week was a huge one for big Brookhaven High senior offensive lineman Amari Smith. Smith suited up for Team Mississippi in the Mississippi/Alabama All-Star game in Mobile on Saturday.

Earlier in the week, before competing against the best Alabama has to offer, Smtih made a big decision public when he gave Mississippi State a verbal pledge.

The 6-foot-7, 295-pound Smith also held offers from Ole Miss and Alcorn State. He turned heads with his performance during the week of all-star practices.

Team Alabama won 14-10 with a late score in the game on Saturday.

Smith joins Malik Ellis of Laurel and Zay Alexander of Tupelo as Magnolia State linemen that have pledged to next play at MSU.

A multi-year starer on the line for coach Tucker Peavey, Smith missed part of his junior year with a lower body injury.

He rebounded to start at tackle throughout his senior season for the Panthers.

A strong student, Smith was picked as a Wendy’s High School Heisman Scholarship recipient earlier this year. He plans to major in Civil Engineering at MSU.

“We just sat in his office and talked about life more than football,” said Smith. “He gave me the background of how he got into coaching. He was such an interesting guy.”

As soon as word spread earlier this week about Leach falling ill, Smith said the MSU coaching staff quickly reached out to him.

“They were calling and texting me to check in and I really appreciated that because I know they’ve had so much going on,” said Smith. “I’m grateful for the opportunity that Mississippi State is giving me, but at the same time I’ve got Coach Leach’s family in my prayers.”