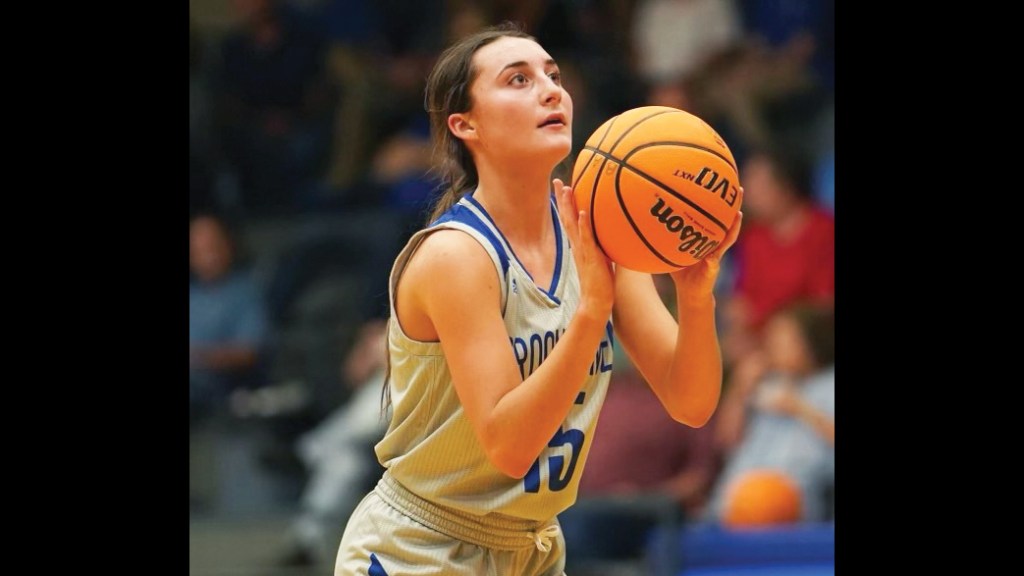 Photo by Ellen Upton Brookhaven Academy sophomore guard Ella Smith knocked down 10 3-pointers in a 69-10 win over Centerville Academy. As a team, the Cougars made 20 3-pointers in the win.

Brookhaven Academy sophomore guard Ella Smith set a Midsouth Association of Independent Schools (MAIS) record Friday with 10 made 3-pointers in a 69-10 win over Centreville Academy on the road.
BA set out to break the record of most made 3-pointers in a game and ended up tying that mark of 20 made 3-pointers. Leake Academy made 20 3-pointers earlier this season in an 87-40 win over a private school from Memphis.
Smith finished 10-of-21 from deep and scored a career best 33 points. BA led 32-0 after the first quarter.
On Saturday, the Cougars took a step up in competition when they traveled to Hattiesburg to face 6A Presbyterian Christian School.
Behind 29 points from eighth grader Anne Rylea Thurman, the Cougars and coach Ron Kessler rolled to a 57-50 win over PCS (12-2).
In the win over Centreville, junior guard Reagan Fortenberry scored 12 points, Thurman added nine points, Lillie Gates scored six points and Ella Brown chipped in three points.
Against PCS, Lillie Gates scored 19 points, pulled down 10 rebounds and blocked two shots.
“Thurman and Lillie combined to scored 47 of our 57 points, but it was an all-out impressive effort by the entire team to get the win over Presbyterian Chrisitan,” said Kessler.
Kessler cited the defensive effort by Fortenberry on junior guard Addy Sherer as one of the keys for BA in the win. PCS drops to 12-3 with the loss while BA is now 14-2 overall.
The next few weeks for Kessler and his team will be a busy time as they’ll play in two different holiday tournaments.
On Monday and Tuesday of next week, they’ll play in a tournament hosted by Lamar School in Meridian. On Monday, Dec. 19 the Cougars will play Southern Academy of Greensboro, Alabama. The next day, they’ll take on Heritage Academy.
From Dec. 28-29, the team will play in the Copiah Academy tournament where they’ll meet up with Jackson Academy and Bayou Academy.
BA doesn’t return to John. R. Gymnasium for a home game until Friday, Jan. 6. That night the team will begin district play with a matchup against Oak Forest Academy.