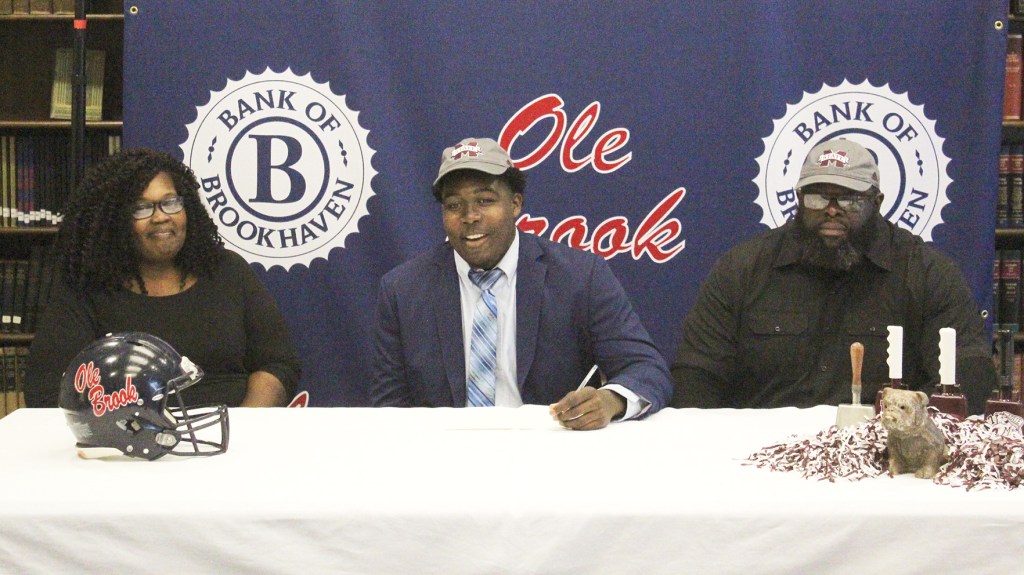 With regular calls and catch-up time via texts, the Bulldogs let Smith know that they were keeping an eye on him during his final year playing for the Panthers.

Earlier this month, Smith headed to Starkville on an official visit and soon gave coach Mike Leach and his staff a verbal commitment.

On Wednesday in the library at Brookhaven High, Smith made that commitment official by signing a letter-of-intent to play for the Bulldogs in 2023.

Smith was one of the last players recruited by Leach before the MSU head coach suddenly passed away on Dec. 12.

Smith’s verbal pledge to the Bulldogs came on Dec. 10.

“Coach Arnett is a guy that I got to know pretty well during the recreating process, I’m really excited to play for him,” said Smith.

A Mississippi/Alabama All-Star Game selection, the 6-foot-7, 295-pound Smith was a cornerstone as an offensive tackle for BHS head coach Tucker Peavey.

Smith says he’s long planned to pursue a major in engineering, so attending State next year makes that much more sense. He was picked as one of two Wendy’s High School Heisman scholarship recipients from BHS this year.

Arnett and his staff got high marks for the work they did in closing the last week of recruiting while also adjusting to the painful loss of Leach.

On Wednesday, the school announced the signing of 27 players with a huge piece of that group coming from the Magnolia State.

Isaac Smith is considered to be one of the big “gets” in the class, as State beat out LSU for the Itawamba AHS defensive back.

Just to give an idea of how tough Region 3-5A is — the district that Amari Smith and BHS played in last season — Hinton, Tillman and Ellis all played at Region 3 member schools.

MSU also signed a pair of players from Southwest Mississippi CC on Wednesday with the additions of defensive lineman Eric Taylor and wide receiver Jacoby Bellazar.

The road to signing day wasn’t an easy one for Amari Smith as he suffered a hip injury while playing basketball during the summer before his junior year.

He missed the first four games of his junior season but returned for a 20-14 overtime loss to Wayne County. BHS went on a run after that, winning five straight games before bowing out in the second round of the playoffs to the eventual 5A champs from Picayune High.

Smith won’t enroll early as he’ll graduate with his class from BHS in May and then head to Starkville after that.

“I’m just thankful for this opportunity,” said Smith. “I came into the season knowing that if I worked hard, I’d start to see more offers come my way. I’m ready to get to Starkville and get to work.”