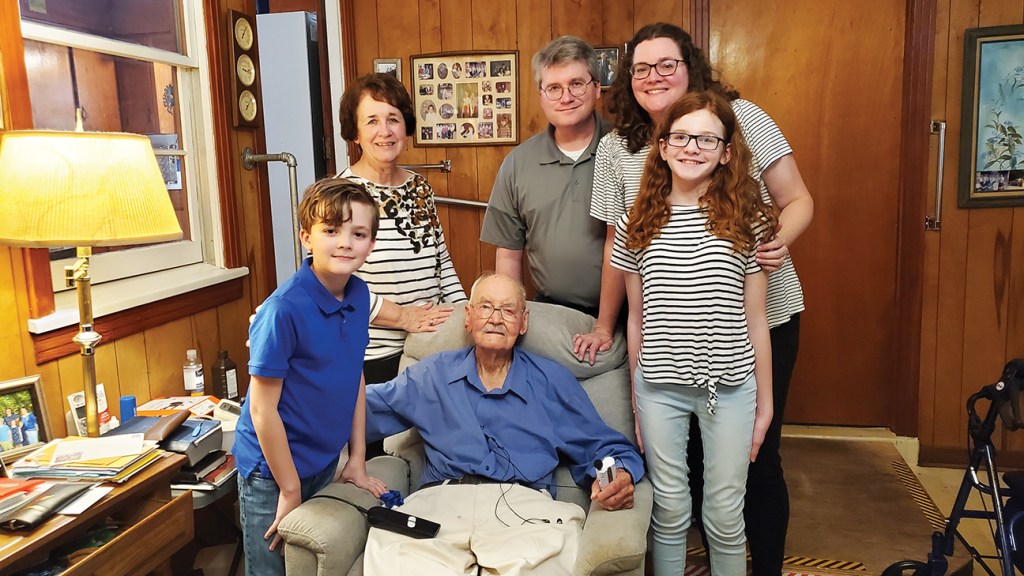 Born in 1920 in Neshoba County, Rhodes moved to Brookhaven 73 years ago. He was born before the invention of microwaves, televisions and vacuum cleaners.

A tall, thin man, “Mr. Cecil” — as he was commonly known — was often seen prior to the COVID-19 pandemic at various events around town, at his church home at First Baptist Brookhaven or sharing coffee and conversation with his buddies at Burger King. He would have his wooden cane and be wearing a World War II veteran cap and a near-perpetual smile.

“I have been so blessed,” he said repeatedly just before his 100th birthday in September 2020, as he recalled some of his life’s experiences.

Rhodes grew up on his father’s farm, working and playing with the children of other workers, many of them members of the Choctaw Nation native to Central and Southern Mississippi. One of his best friends was a Choctaw boy named Ben Ed.

One of his earliest memories is walking with his older brother Hayes to school. The 5-year-old and 7-year-old walked one mile to get to the “school bus” — two mules and a covered wagon — and his brother was never in a hurry to get there on time. But little Cecil enjoyed school.

At age 22, he was drafted into the Army Air Corps, the predecessor to the Air Force, and served until the end of World War II in November 1945, when he sailed back into New York City and was able to see the welcoming sight of the Statue of Liberty. He and about 16 million other members of the Armed Forces returned to their homes, many of them changed men, to changed situations. His three brothers had also served in the war, and one made the ultimate sacrifice in France at age 20.

When Rhodes stepped back inside his Mississippi home, he was greeted by one of his three sisters, and by the news that his mother had died two months earlier, on Rhodes’ 25th birthday.

Even as he recalled the sadness, he followed it quickly with another declaration of how much God has blessed him.

He was married to his sweetheart Olivia until her death in 2006, and they had two children, a son named Byron and a daughter named Sheila. He eventually welcomed three grandchildren and six great-grandchildren.

“He’s been a good example of a daddy,” Sheila said.

Rhodes said he decided to follow Jesus at age 10, and was baptized in the neighbor’s cow pond, after they chased the cows out of it. Since then, he said he made lots of mistakes, but tried his best to follow the Lord.

Just before his 102nd birthday in 2022, Rhodes repeated his constant declaration — “I have been so blessed.”

“Never in this life did I plan on old age (but) for whatever reason the Lord has left me here,” he said. “I can still sleep in my own bed. I’m just thankful that the Lord has blessed me like he has. Even though it’s limited, I can still take care of a lot of personal things. I don’t move as fast as I once did, but I can get up. I can stand and balance myself and move along.”

Rhodes was one of the first people to be awarded the Mississippi Veterans Honor Medal. Rhodes and Army Sgt. R. E. Nettles, of Bogue Chitto, were presented the new medals in May 2022 by former Senator Sally Doty. The award was also presented posthumously to Army Sgt. Charles Burchfield.

Like so many, Rhodes looked upon his military service with humility, never trying to claim glory or recognition.

“They talk about heroes,” he said in 2020. “The ones they shipped back in a pine box or the ones that didn’t come back, that’s the heroes, you know.”

Many people who knew “Mr. Cecil,” however, would grant him that title, as well.