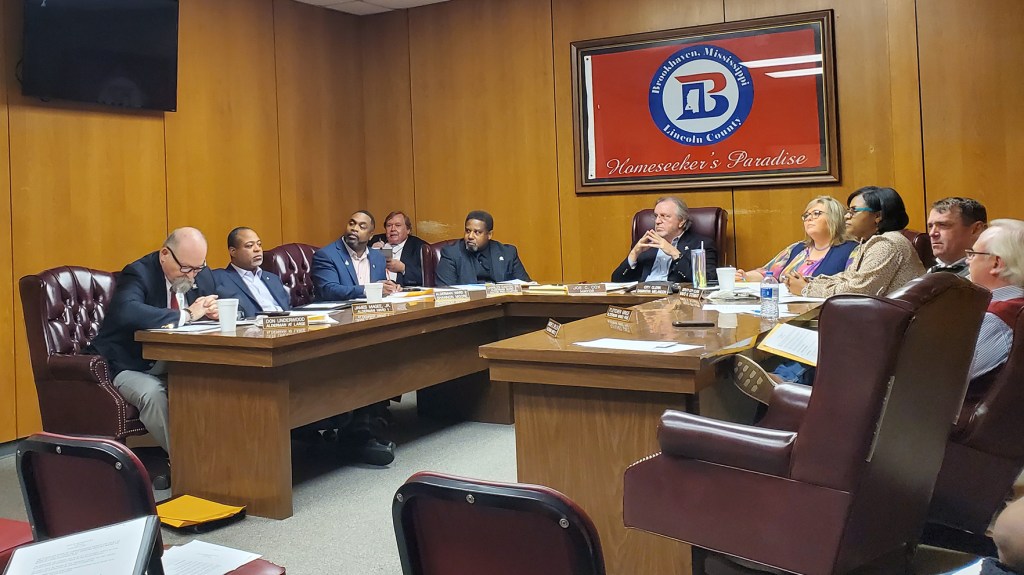 PHOTO BY BRETT CAMPBELL Brookhaven Board of Aldermen

After a lengthy closed-door executive session Tuesday that involved loud music played at the boardroom door to discourage eavesdropping, the Brookhaven Board of Aldermen approved seven promotions in the city’s police department.

Five promotions, with accompanying salary increases, were approved as presented to the Board. They were:

• Penelope Banks, from Lieutenant of Detectives to Captain of Detectives, with salary increase from $53,750 to $56,000, effective Jan. 1.

Sgt. Jonathan Hart was promoted to Investigator 1, rather than Master Sergeant. The suggested salary increase from $47,500 to $50,750 was not approved. The vote was 5-0 on Hart, with Ward 5 Alderman Fletcher Grice abstaining. The vote for every other promotion was 6-0. Ward 6 Alderman Andre’ Spiller was not present.

• Approved December 2022 salaried payrolls and transfer of funds to cover.

• Approved the final resolution for up to a 10-year ad valorem tax exemption for Rex Lumber Brookhaven LLC for improvements made in 2021, after having been approved by the State of Mississippi. The board approved the original resolution in May 2022.