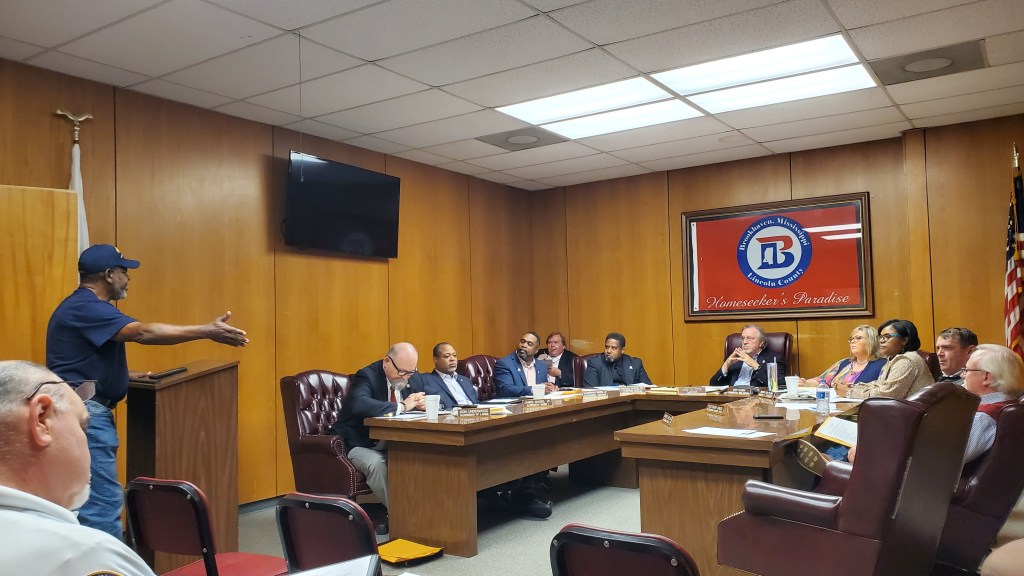 PHOTO BY BRETT CAMPBELL Roy Smith speaks to the Brookhaven Board of Aldermen during its most recent meeting.

Can an educational community center prevent the extinction of young, black males? Brookhaven citizen Roy Smith says it can help.

Smith appeared before the Brookhaven Board of Aldermen during its regular meeting Tuesday, as he has monthly for approximately one year.

“I’m starting where I left off last year. Last year, our community was in fear, insecure and in a mode of violence. This year, it’s the same way,” Smith said. “No one cares, it feels like, especially our ranking members on this board. We need a Community Education Empowerment Resource Center for social education.”

“Yeah, and in the community,” Smith said. “I was watching Animal Planet the other night (about) animals going extinct. They wanted to spend $1 million to save this little toady frogs. We have an extinction here, of young black males. I’m asking you all to appropriate funds to build the (center). When we become better, we feel better, and … do better. An informed community is a better-educated community, which is a better-prepared community … which gives hope. The community feels like we’re in despair. All these funds collected in municipal courts from minorities and we don’t see any return. Black people have to shop in Brookhaven because we can’t afford to go anywhere else (like) Jackson or New Orleans. Black people are paying more taxes than anyone else here.”

Smith again called on the ranking members of the board to “do something.”

“Mr. Moore, you are the ranking member on this board,” Smith answered.

“No, I’m not. (Ward 5 Alderman) Fletcher (Grice) has been here longer than me,” Moore answered. “But thank you for the promotion.”

“You are the ranking member of the minorities,” Smith answered.

“Have you called your alderman?” Moore asked.

“Who is your alderman?” Moore asked.

“Why don’t you call your alderman, who represents you in your ward?” Moore asked him.

“Because you are the ranking member of the minorities,” Smith said.

Attorney Bobby Moak told Smith his allotted time was up, and thanked him for coming. Moak also said the board was putting money into other things that help minorities, saying, “It’s happening.”