Crossing the bridge when they get to it 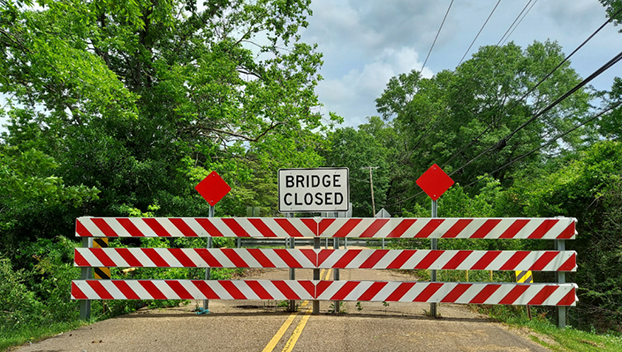 Photo by Angela Cutrer / This closed bridge on North Jackson Street runs over a tributary of the Bogue Chitto River. The bridge is located on the city-county line, so both county and city governments wanted to ensure it is on the list of bridges to be replaced or repaired.

Engineers and contractors are working on Brookhaven bridge projects as quickly as possible, they say, quite literally crossing those bridges when they get to them.

The North Jackson Street bridge repair project is “moving as fast as possible toward construction,” according to engineer Ryan Holmes.

“We have completed the environmental phase. The plans are 95 percent complete. We’re working on getting utilities relocated and buying a few small pieces of right-of-way,” Holmes said in response to questions from area residents on what’s keeping the project from completion.

“As soon as those are completed, we’ll be able to advertise for bids on construction.”

The bridge on Brignall Road near Browns Loop was closed Friday morning to begin construction. The contractor has 75 working days to complete the project, but Holmes does not anticipate the work to take that long.

“We expect it to be open to traffic before that time,” he said. “We’ll have a better idea this week.”

The bridge will be removed and replaced with concrete pipes. The roadway will then be built over the pipes.

Due to availability of funding, approvals and contractors, projects sometimes overlap, according to Holmes.

“Both bridges are high priority for the city and sometimes projects move along a little faster than others due to things beyond our control,” the engineer said. “We’re grateful to be able to replace both bridges, and Brignall just happened to make it to the finish line before North Jackson. We’re putting the same emphasis and effort on getting both bridges done.”