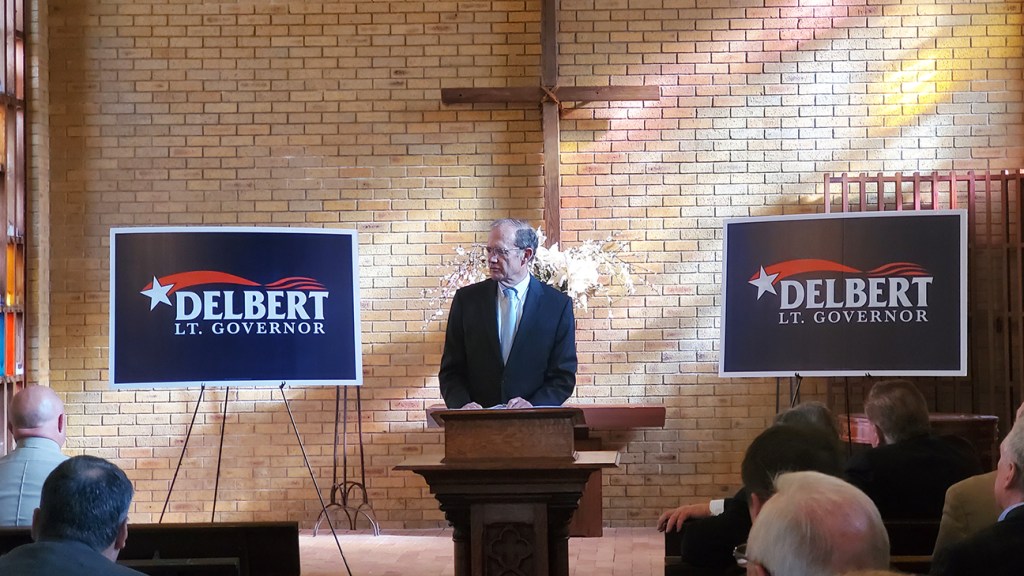 PHOTO BY BRETT CAMPBELL Lt. Gov. Delbert Hosemann speaks to a group of supporters in a visit to Brookhaven Monday.

Lt. Gov. Delbert Hosemann visited Brookhaven Monday to rally the troops in support of his bid for a second term as Mississippi’s lieutenant governor.

Hosemann announced his decision to run again when he qualified for the office on Thursday, Jan. 5. In Monday’s meeting with members of the Lincoln County Republican Party, he shared some accomplishments from the past four years and some comments about the next.

Hosemann was elected to state government for two terms as Secretary of State, the first Republican to be elected to that position since Reconstruction. He followed that with a successful bid for the office of lieutenant governor, to which he was elected in 2018.

Taking the podium before an audience of nearly five dozen supporters in the Ole Towne Church chapel Monday afternoon, Hosemann thanked Lincoln County Sheriff Steve Rushing for his introduction. He also thanked law enforcement members in general on Law Enforcement Appreciation Day, reminding those in attendance that Rushing is the first Republican ever elected to the office of sheriff in Lincoln County.

“I want to make sure people understand you’ll see strong work from the Senate for our law enforcement officers,” Hosemann said.

Among the highlights of work accomplished in the Senate under his leadership this term, Hosemann noted:

• Reduction of the size of state government by 12 percent (3,000 employees)

• Largest tax decrease ever in Mississippi

• $300 million given to rural water associations

• $150 million given to fund rural broadband

“In every way you can measure the health of our state, we are head, and we’ve never been better,” the lieutenant governor said. “We have $2.7 billion cash in the bank, and we’re earning more than $60 million in interest on it.”

“The first thing I want to do next year is take the $270 million over budget we have and give it back to the taxpayers,” Hosemann said. “The biggest rebate in Mississippi history, in addition to tax cuts.”

An additional $350 million in ARPA funding will be distributed over the next two years.

“Our rural hospitals are having problems, as you know,” Hosemann said. “Your hospital here, (King’s Daughters Medical Center), is well-run and a real asset. But the reimbursement rate has stayed the same and costs have gone up. Any business that has that is going to lose money. They’re struggling. We are working on that reimbursement rate, and hope to announce that by the end of this month. I’m real hopeful this will go a long way.”

Hosemann also talked about an optional modified school schedule that local districts will be able to use, if they choose to do so. Similar programs have been successful in places like the Gulf Coast, northeast Mississippi and Lamar County, where he said 82 percent of teachers and 85 percent of parents prefer the modified schedule.

“We are positioned as a state to have the best year ever,” Hosemann said. “I’m asking you to rehire me. I have a vision for the state.”