City board, chief of police still at odds over promotions, pay 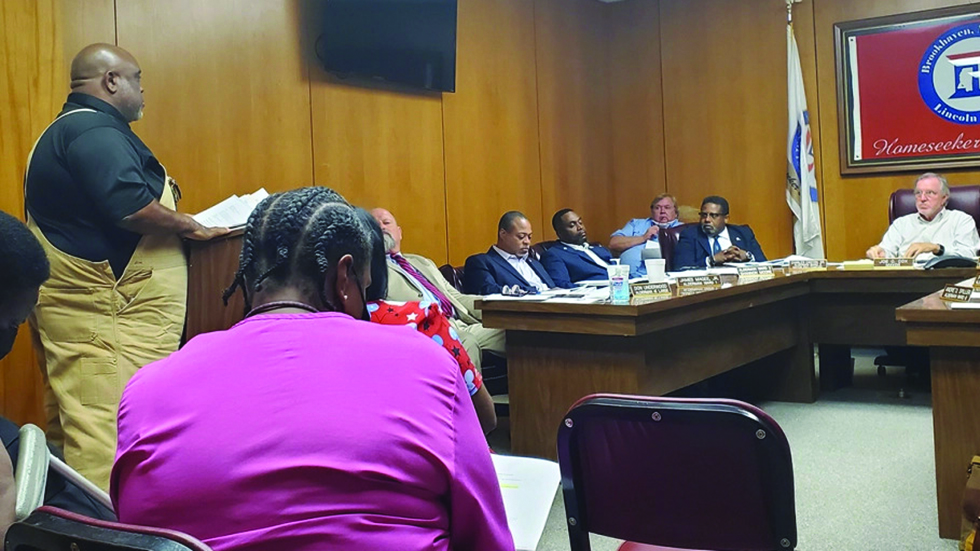 PHOTO BY BRETT CAMPBELL Police Chief Kenneth Collins addresses the Brookhaven Board of Aldermen at a recent board meeting.

Even though aldermen recently approved promotions for five police officers, the Brookhaven chief said officials still don’t understand the importance of rank and compensation to the department.

“It’s amazing to me how we catch so much hell while we’re alive and when we die everybody shows up to honor us,” Police Chief Kenneth Collins. “Honor us while we live. Give us the equipment we need, the money we need, the camera systems we ask for to make this town safe. We need to get these things done now.”

Aldermen on Jan. 3 approved seven promotions for police officers — five as recommended by Collins and two with adjustments deemed necessary by the aldermen. The vote to approve came during a closed-door executive session — complete with loud music being played to discourage eavesdropping outside the room.

The promotions are the latest round in an ongoing struggle between the city aldermen and the police chief regarding the department’s budget and personnel actions. Over the past nine months, tensions have presented primarily over promotions and their accompanying pay increases. A police department organizational structure was approved in October 2022 and implemented Dec. 1, after meetings between Collins, Assistant Chief Clint Earls and Alderman-at-large Don Underwood.

At the final board meeting of 2022, six promotions were presented to the board to approve for the police department. As had become common over previous months, all police personnel matters were discussed in executive session.

Following the closed-door session, the board voted to approve the re-hire of a part-time officer and to grant the promotion of Sgt. Lisa Jackson to Master Sergeant. Jackson was one of the six suggested promotions.

When asked about the others on the list by Collins, Mayor Joe Cox said the board was taking the others under advisement, pending more information to be submitted from BPD.

“We’ll get the information and review it and bring it up at the next meeting,” Cox said then He then called for a motion to adjourn, which Alderman Andre Spiller made.

Earls spoke up, saying the other information was immediately available, and he had brought it to the meeting, as he and Collins had advised in a letter to the Board. He then passed out copies of resumes for the other officers to each board member present. Earls said he was prepared to answer questions.

“We’re out of order. We have a motion on the table to adjourn,” Cox said, calling for a second. When the second was given, he said, “We are adjourned. We’re done.”

Collins protested, saying he and Earls were asked at the previous meeting to have the information with them for this meeting, and should have been called into the closed-door session to present materials and answer any questions.

When the board reconvened in the new year on Jan. 3, the five promotions were again presented, along with an additional two recommendations. After the lengthy closed-door executive session, the aldermen approved all seven, but only five as they were presented. They were:

• Penelope Banks, from Lieutenant of Detectives to Captain of Detectives, with salary increase from $53,750 to $56,000, effective Jan. 1.

Two were approved with alterations:

• Sgt. Jonathan Hart was promoted to Investigator 1, rather than Master Sergeant. The suggested salary increase from $47,500 to $50,750 was not approved. The vote was 5-0 on Hart, with Ward 5 Alderman Fletcher Grice abstaining. The vote for every other promotion was 6-0. Spiller was not present.

After the vote, Underwood said the reason Hart and Fernando were changed boils down to the wording of the BPD organizational chart.

“Salary goes with the position in government, for payroll purposes,” he said. “On the organizational chart, there’s no ‘master sergeant’ designation — it’s sergeant with however many years of experience.”

Likewise, Fernando was moved to Investigator 4 due to his experience, since “master sergeant” does not exist on the investigator chart.

“Keep in mind this has nothing to do with what the police department calls them. They can call the rank whatever they want,” Underwood said. “These designations are for government payroll purposes.”

Collins said while he is glad the city approved pay raises for starting officers, he does not think the board as a whole understands the need to operate on the basis of rank rather than general title.

The rank also applies to respect for the officers, the chief said. Law enforcement officers work long hours, day and night, and do not get the respect and honor they deserve every day.

Neighboring cities are going digital, and Brookhaven needs to follow suit because it is “the way of the future,” the chief said. All owners of businesses, apartment complexes and trailer parks should have well-lit properties with surveillance systems that will testify when people will not.

“People are not willing to testify to anything and the police department gets all the blame,” he said. “Please help me keep us and our children and their children safe by getting these camera systems set up in the city. It will help us all tremendously.”