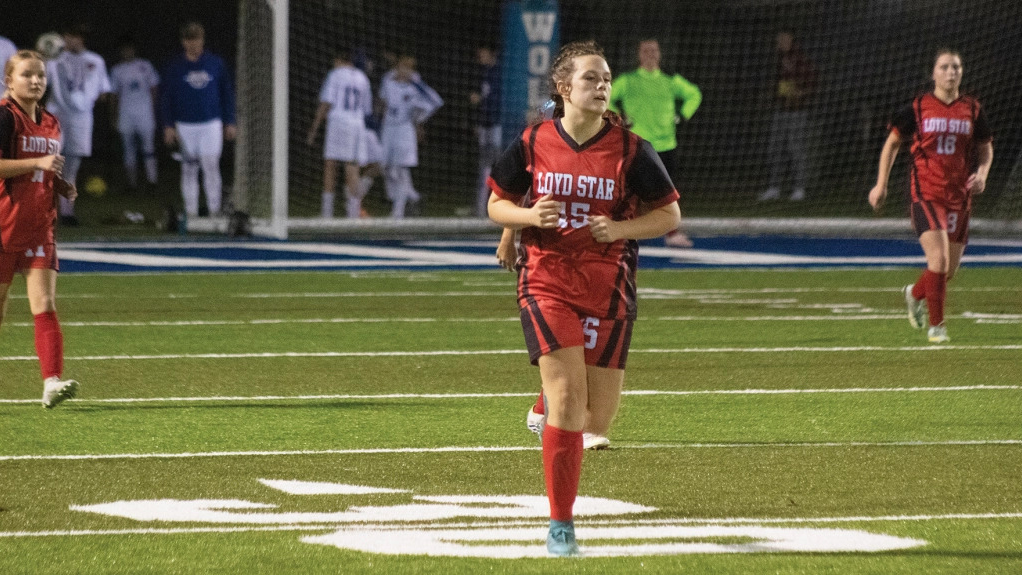 PHOTO BY HUNTER CLOUD Loyd Star’s Adi Holcomb scored two goals in a 6-0 win over Wesson early in the season. Loyd Star is set to face Wesson again Thursday, and could lock up second place for the 14-3 team.

Here’s a look at how area teams sit in the final week of the soccer regular season.

The Franklin County Bulldogs have clinched first place and a first-round bye in the upcoming postseason as the boys’ and girls’ teams will both finish atop the standings in Region 7-Class I.

Both FC teams are coached by Jeff Long and both are currently unbeaten in division play with the girls’ team sitting at 12-3-2 overall and the boys’ team boasting a record of 14-1-2.

The Bulldogs still have two regular season games left with Hazlehurst. The teams will meet at FC on Wednesday and then play at Hazlehurst on Thursday.

On the girls’ side of the table at press time, Loyd Star sits in second place and is followed in third place by West Lincoln. The top three teams from the division all advance to the playoffs.

West Lincoln clinched at least the third spot with a 2-1 win over Wesson on Monday that moved the girls’ team to 14-3 on the season for coach Dane Hodges.

Loyd Star is set to face West Lincoln on Tuesday and Wesson on Thursday.

A win in either one of those games will lock up second place for Loyd Star and coach Jordan Lea. Loyd Star is 14-3 overall and its only two losses in division play both came against Franklin County (2-0 and 3-1 defeats).

The third-placed team in the region will play on the road when the playoffs begin on Saturday while the second-place team will host a home match.

On the boys’ side of things, there are still several possible scenarios that could play out for second and third place with Loyd Star, Hazlehurst and Wesson all in contention.

As things sit at press time, Loyd Star has the inside track on second place and the possibility of hosting a home match on Saturday.

Loyd Star (11-6) will play at Wesson on Thursday in the regular season finale in a match that may likely decide who sits in second or third place in the playoffs. Wesson (7-5) won the first meeting between the teams in penalty kicks earlier this season.

Both Brookhaven High squads will play in the postseason when the playoffs begin on Saturday.

The Brookhaven High girls (9-7) and coach Dustin Bairfield will most likely head to Hurley on Saturday to play at East Central High (12-4-1).

The BHS boys squad and coach Aaron Ayers have a chance to earn the second seed in the division and a home playoff spot.

The Panthers (12-3-1) got a huge 1-0 win on the road last week at Florence High. The Eagles had beaten BHS 3-0 when the teams met earlier this season.

The regular season concludes for BHS on Thursday with a match at West Jones High in Soso. West Jones (13-1-1) beat the Panthers 3-1 earlier this season, but lost in penalty kicks to Florence in the first matchup between the schools and the Eagles and Mustangs are scheduled to play again on Tuesday.