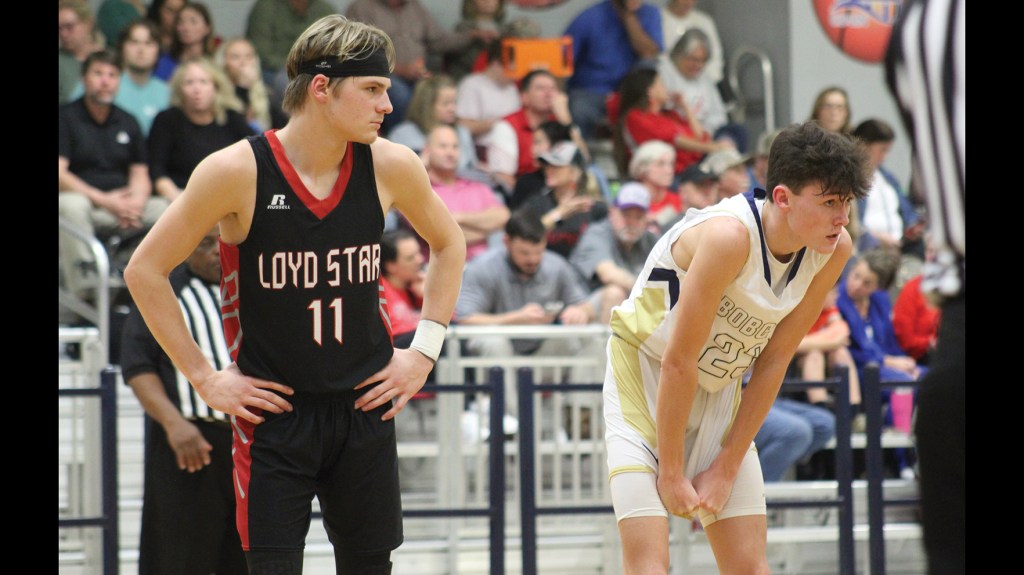 PHOTO BY CLIFF FURR Junior forward Colby Terrell (No. 11) scored a team-high 23 points for Loyd Star in a loss to Bogue Chitto on Tuesday. Bogue Chitto sophomore Noah Magee (No. 23) scored 12 points for his team in the win.

The gym feels a little more alive when Bogue Chitto and Loyd Star meet on the hardwood and that was again the case when the Bobcats hosted the Hornets Tuesday in a Region 7-2A matchup between the Lincoln County rivals.

Too much DeMya Porter was the difference for Bogue Chitto as the junior center scored 34 points in the win for coach Marc Howard’s squad.

BC had a size advantage across the board and owned the interior with putback scores and layups by Porter at the basket.

Bogue Chitto led 28-25 at halftime, but came out of the break with intentions of getting the ball into the paint.

Junior forward Tykiara May scored twice in the lane and then Porter got an easy bucket to start the third quarter on a 6-0 run for Bogue Chitto and forced Loyd Star coach James Russell Cruise to call a timeout.

Once Bogue Chitto (10-7, 2-1) got rolling, the points came quickly in the second half. Loyd Star was plagued by turnovers as skip passes over the top of the BC defense ended up going out of bounds or off the hands of the intended LS player.

The Hornets turned the ball over while trying to get it inbounds just before the end of the third quarter. Porter put up a long shot, got her miss and kicked the ball out to senior guard Fayth Magee.

The homestanding Bobcats jumped out to a huge lead and withstood a comeback attempt that saw Loyd Star grab the lead back late before BC made crucial free throws to hold on for the win.

LS coach Seth Britt called several timeouts during the first two quarters to try and slow down the surge of early offense by Bogue Chitto.

A layup by sophomore point guard Devonta “Bam” Thompson made the Bogue Chitto advantage 30-11 with 5:56 left in the second quarter and prompted Britt to call his third timeout of the half.

The Bobcats combined to make five 3-pointers in the first half with Shomari Jenkins knocking down two, Thompson sinking one and sophomore Noah Magee canning two more 3-pointers.

Jenkins drained a 3-pointer just before the halftime buzzer to make the BC advantage 39-25 at the break.

Loyd Star used the deep ball to start chipping away at the lead early in the third quarter. The Hornets made five 3-pointers in the period, with all of them coming over the course of six offensive possessions.

Junior Caden Yarborough made two of those 3-pointers as did junior forward Colby Terrell. Junior guard Nathan Mills also knocked down a 3-pointer in the third quarter for the Hornets.

A Terrell 3-pointer pulled Loyd Star within 58-55 late in the third quarter and then the Hornets tied the game at 58-all to start the final 8-minutes of action when senior guard Julius Smith hit a 3-pointer to start the fourth quarter.

Loyd Star kept its run going when Mills made two free throws to give Loyd Star a 60-58 advantage.

The game had a frenetic pace at times in the second half, with one side scoring in transition, only to see their opponent hurl a baseball pass to a lone player on the opposite end for an answering layup.

The difference late was Bogue Chitto’s ability to rebound as freshman forward Randy Crisler got a putback score that gave the Bobcats the lead for good at 70-67 with 90 seconds remaining.

Jenkins went 2-of-4 from the free throw line late and Thompson went 4-of-6 from the charity stripe during that same time to seal the win.

“Really proud of the poise the guys showed late to get the win,” said Bogue Chitto coach Marc Howard. “We started one senior, one junior, two sophomores and a freshman. Doing what it takes to win late in a game has been part of our growing process over the last two years. Coach Britt is a friend and a coach that I respect and I knew Loyd Star would fight back when we got up early.”

One strength Bogue Chitto has is its depth. Crisler, Jay May and Ken May all can rotate inside. Shomari Jenkins, Shakell Jenkins, Jax Leggett, Magee, Williams and Thompson make up the rotation at guard.

Bogue Chitto (13-4, 3-0) next turns its attention to East Marion (12-2, 3-0). The schools will play at Bogue Chitto on Friday and then return the game by meeting at East Marion on Monday.